RESIDENTS came away frustrated from a townhall to discuss their concerns over a water pipe connection linking a newly completed project to the Taman Desa Mewah reservoir tank.

The new high-rise condominium project is set to be ready for occupancy next month and has 750 units, not including the commercial units completed in 2018.

“This area recorded less supply disruption in the past based on the number of complaints we received regarding burst pipes,” said Azzrul.

“Once people start occupying the new units, the water pump will be forced to work at a higher capacity to support increased demand,” he said, adding that supply disruption would become more likely.

Azhar also said the tank used to be able to continue supplying water to the neighbourhood for nine hours when there was a disruption previously, but had now reduced to four hours after surrounding neighbourhoods such as Taman Sahabat and Taman Hiew Piow were populated. 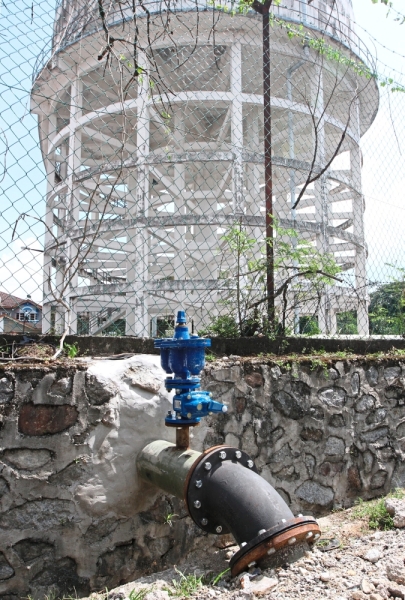 Resident Zainudin Dahlan wanted to know the daily volumetric flow rate of water supplied to the neighbourhood and what the new rate would be with the projected increase in demand.

Azzrul said it usually took 12 hours for a reservoir tank to be filled to capacity but based on records, it took only six hours for the tank in Taman Desa Mewah to fill up completely.

When pressed for the exact figure, Syabas assistant general manager Maimunah Musa said one-third of the water capacity was retained in the suction tank while the remaining two-thirds would be in an elevated tank.

“We did the calculations prior to approving the new connection. We just did not bring the data with us today,” she said.

She assured that a special committee would be set up to review any new development plan in the area prior to approval.

“The committee will review any development plan after taking into account technical input from Syabas Hulu Langat.

“We received RM600,000 from the developers to upgrade the water infrastructure should the need arise in the future,” said Maimunah, adding that a two-storey terrace unit used approximately 1,500l or 330gallons of water daily.

“Upgrading work will likely take time, during which supply disruption would have already occurred,” he said.

“Why not upgrade now? The old tank was built almost 20 years ago.

“What guarantee do we have that it can continue to support increased demands from the new units?” Hamdan questioned.

After the meeting, Zainudin told StarMetro no notice had been given to the residents prior to connecting the tank to the new residential project.

“They should have told us the amount of water that would be left in the tank after supplying to Taman Desa Mewah,” he said.

“We can then assess whether the balance will be sufficient to support increased demand, or if we need a new reservoir tank.

“As a service provider, they should look into addressing their customers’ concerns,” he added.

Another resident, Muhammad Wahid said residents’ comfort and livelihood must be respected.