Distressed by flash floods in Sentul

DOWNPOUR or not, the bungalows in Jalan Union 1 to 3 in Sentul, Kuala Lumpur, are hit by flash floods because of the swelling of Sungai Untut.

Since March 25, the neighbourhood has experienced at least 15 flash floods, killing three puppies, uprooting a tree and damaging cars, furniture and electrical goods.

An hour-long downpour caused the water to rise more than two feet at the bungalows located on lower ground.

The residents believe the construction of an interceptor system and treatment plant at Sungai Untut is the cause of their flood woes. Jalan Union 2 was badly affected by the recent flash floods, with water rising up to two feet.

One of the affected residents, Nandini Sivanesom, said the family was afraid to go out as they were worried about what they would have to face when they returned.

“Sungai Untut flows into Sungai Gombak. So, even when it rains in other areas, the water level in Sungai Untut rises but it had never flooded until recently.

“I called the Kuala Lumpur City Hall (DBKL) helpline and was told that the contractors would only able to conduct repair works in June. Nandini showing the water mark left behind after flash floods hit her home.

“My house is a single-storey unit and it is a mess every time it floods,” she said, adding that they are forced to roll up the carpet and curtains as well as shift everything from the floor to the sofa, table and beds.

“My family has three cars and we have already moved one to a condominium nearby. But this time, we did not manage to move one car and water has entered it.

“We also have a dog that could be trapped if the place floods,” she said. Children will no longer be able to enter the treatment plant as DBKL’s contractor has fixed the fence.

Cancer patient Wee Thiam Hua said it was tiring to clean up after the flash floods.

“I do not have a maid. I just had surgery and I have no choice but to do heavy cleaning work. The water is muddy, dirty and smelly.

“Every time after cleaning up, I end up in pain,” she said.

Dr James Emmanuel too had a litany of complaints, saying the situation was taking a toll on the residents’ health and safety.

“My father is a heart patient who has undergone a triple bypass and he is also diabetic. He is unable to get to safety quickly. His legs have been soaking in filthy water from the drains and sewage which floods the house and could become infected.

“My mother was recently involved in an accident and is in poor health. Nandini’s house is a mess as the family has to move everything on the floor to higher ground when it floods. Here, her maid is busy cleaning one of the rooms in the single-storey house.

“Our pet dog is always covered with mud and filth every time it floods,” he added.

He also said since the water level rose above electrical outlets in the home, there was a risk of electrocution.

“There are snakes, iguanas and large monitor lizards in the river, which may enter the house.”

Dr James added that a tree outside his compound was uprooted and fell onto his house after a flood.

“DBKL claimed that it was within my house boundary. I had to pay a land surveyor to prove that it was not, after which there was no update from DBKL. So, the tree is on my house.

“My house tiles have popped out as well and the contractors are quoting between RM30,000 and RM50,000 to raise and retile the ground floor,” he said. Manpal lost three puppies after the waters rose too quickly to save them.

“The water rises very fast, leaving us little time to salvage items. My pet dog gave birth to a litter of four puppies but we only managed to save one.

“I have lodged complaints to DBKL, the police, Fire and Rescue Department and Alam Flora but the situation remains unchanged,” he complained.

The residents are demanding compensation from DBKL for damage and losses incurred during the floods.

A source involved with the interceptor system and treatment plant project said the Irrigation and Drainage Department (DID) had instructed the contractor to demolish the obstruction immediately.

The source explained that the construction was part of the River of Life project, where interceptor systems were built to treat or clean river water.

The project started in September 2016 and was

supposed to be completed by March 13 this year.“The system intercepts and diverts the low flows of Sungai Untut via a diversion gate to the treatment plant before it is returned to the river.

“The contractor may have not followed the drawings correctly, as there should not be any or only minimum constriction to the river flow during a storm.

“The gate is also designed to be fully lowered and poses no adverse obstruction to the flow.

“The gate may have been constructed much higher than what was designed,” the source said.

Batu MP P. Prabakaran, who visited the site, said he requested DBKL, DID and Alam Flora to investigate the root cause of the floods.

“Physically, I can see that debris is stuck and obstructing the flow of the river. I have asked the contractor to clear it away and do the necessary, including breaking any structures, to prevent the water from overflowing into the houses nearby,” he said.

During StarMetro’s visit to the project site on Wednesday, children were seen playing on the treatment plant, oblivious to the danger.

It was learnt that the project site and treatment plant was next to a children’s playground. There was no hoarding and the tape cordoning off the area was falling apart. There were only small “danger” signs, which the children paid no attention to.

They gleefully played between the gaps on blocks covering the treatment plant, throwing sticks and stones into it. If they lose their footing, they risk falling into the plant, which is about two storeys deep.

DBKL, which was informed of the safety hazard, said its contractor had already fixed the fence.

As at press time, both DBKL and DID failed to respond to other queries. 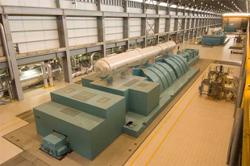 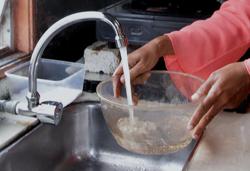