Not only are the decommissioned oxidation ponds an eyesore, the walls are a safety hazard.

All three ponds, each measuring more than the size of a football field, were shut down in stages from 2016 to 2017, and the sites have been neglected since then.

KRT Zone A Taman Sentosa chairman Mariammah Subramaniam said the ponds used to have high walls around them, but since they are no longer operational no maintenance work had been carried out.

One pond is located between Jalan Dato Yusuf Shahbudin 20 and 23, between a row of terrace houses and Villa Sentosa, a cluster of low-rise apartments.

Mariammah pointed out that one side of the wall of the oxidation pond closer to Jalan Dato Yusuf Shahbudin 23 had collapsed onto the field three months ago after a thunderstorm. 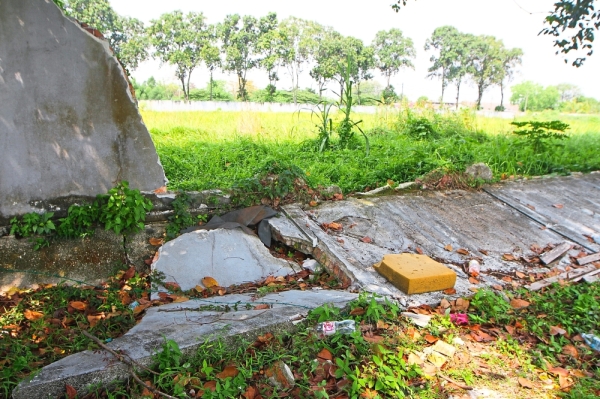 Bits and pieces of the decommissioned oxidation pond’s wall between  Jalan Dato Yusuf Shahbudin 23 and 20.

“We are worried that the other walls will collapse as cracks have appeared on them and the walls are tilting towards the road across the terrace houses,” she said.

She added that the KRT Zone A, Taman Sentosa had advised residents not to park their vehicles along the walls surrounding the ponds for fear they would give way.

Mariammah said the oxidation ponds had been an issue since the 1990s as the aerators were not working, causing a stench.

Resident Manjit Singh, 54, said since all three oxidation ponds were decommissioned, the land should be handed over to the local council.

“It should be turned into public parks or recreational areas and not left to rot further,” he said.

He added that the land should be gazetted as recreational space with a park that would benefit residents. Asokhan showing large cracks on the wall of the oxidation pond.

“We have a large number of senior citizens and young people who need quality recreational areas,” he said.

Asokhan said a linked park will help to integrate the community and encourage people to mix.

Asokhan said the park could have futsal courts, playgrounds and outdoor exercise stations. Manjit says the oxidation ponds should not be left to rot any longer.

“We have noted that the remaining 60m of the wall has shown cracks.

“All three oxidation ponds had been decommissioned and sewage had been diverted to the regional sewage plant.

“The collapsed wall will be rectified and work will start soon,” she said.

Chan added that the department will clean up the area and continue to monitor the sites periodically.