Sailing on a sea of Mazu traditions

The goddess is revered by Chinese across the world as the protector of seafarers as well as the Empress of Heaven.

The festival kicked off with a grand prayer ceremony led by organising committee members and guests alongside rows of performers in traditional costumes.

“This marks a momentous day for us, as this is the first Mazu grand celebration held outside Thean Hou Temple,” said Selangor and Federal Territory Hainan Association president Dr Tang Chai Yoong. “Our association has been in the forefront of promoting and preserving the Mazu faith and core values in the past.

“We hope to continue our journey to another new village next year after this event in Jinjang Utara,” he said.

The ceremony was followed by a parade which saw a thousand-strong crowd of devotees walking from SJK(C) Jinjang Utara through Jalan Tebing Timor, Jalan Jinjang Utama and Jalan Benteng Barat before making their way back to the primary school.

Stilt-walkers dressed as Chinese mythological characters could be seen trailing the parade. Dr Tang (in red robe) leading the grand prayer ceremony with other guests.

A Mazu statue was placed in a decorated sedan chair and carried by an entourage of devotees along the procession.

The 4.3km-long parade took about an hour and 30 minutes.

The highlight of the celebration were 52 women garbed in traditional Meizhou costumes while sporting unique sailboat-shaped hairstyles to pay homage to the sea goddess.

The hairstyling was done in the morning at Thean Hou Temple by 26 volunteers who had undergone a series of intensive lessons with three master hairdressers from the Meizhou Mazu Temple. 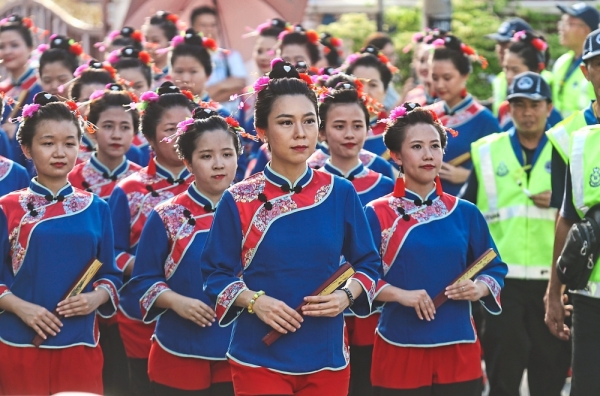 The 52 women in traditional Meizhou costumes sporting the unique sailboat-shaped hairstyle were the highlight of this year’s celebration.

The “Mazu chignon hairstyle”, originating from Meizhou Island in Fujian, is part of the Mazu beliefs and customs inscribed on Unesco’s Intangible Cultural Heritage of Humanity list in 2009.

The three main features of the hairstyle are the chignon, the tucked comb and the hairband with each detail resembling different parts of a sailboat – the sail, the oar and the rope respectively.

A series of multicultural performances, including Malay and Indian dances, acrobatics, Northern lion dance and Chinese orchestra, kept the crowd entertained throughout the festival. Stilt-walkers dressed up as Chinese mythological characters from the classic ‘Journey to the West’ story.

“We have never played host to any big-scale cultural event like this throughout the 68-year history of the school,” said SJK(C) Jinjang Utara board chairman Low Poon Kong.

“I am proud to witness the overwhelming support from the public despite the scorching sun,” he said.

“With our students performing the famous ‘24 Festive Drums’, the traditions will be passed on to a new generation,” Low said.