From right) Rozali, Chow, Jagdeep, Chan and Berapit assemblyman Heng Lee Lee having a discussion after the launching of the council’s SCoPE control room.

THE Seberang Prai Municipal Council (MPSP) has taken a giant step in achieving its Smart City vision by collaborating with Intel Microelectronics (M) Sdn Bhd to develop a technology platform to better manage and control information.

Under the pilot project called SCoPe (Smart City of Penang), some 64 CCTV cameras enhanced with facial recognition features will be set up in several areas.

Enforcement officers will monitor the footage captured by the cameras from the council’s integrated control room.

Besides the CCTVs, the council will also install a total of 77 LED street lights and sensors, six units of ultra long-range communication systems and 15 environment sensors.

“The journey towards becoming a smart city has been challenging with certain issues such as infrastructure, financial and technology restricting our progress.

“I call upon all corporate companies, as part of their CSR projects, to help MPSP obtain its recognition as a Low Carbon City and Smart City by 2022. 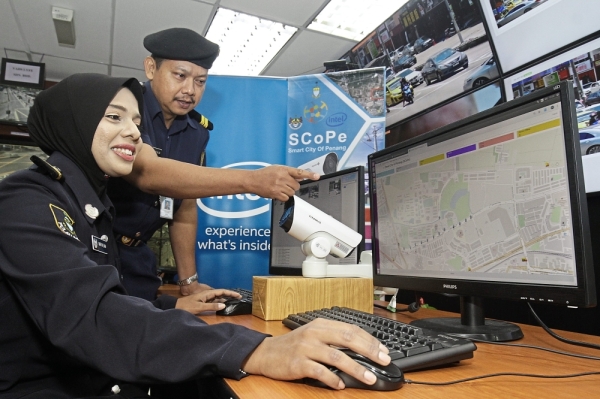 “I am confident that if the SCoPe project is successful in Penang, it will be followed by other states,” he said during the launch at Bandar Perda in Bukit Mertajam recently.

Chow said SCoPe was in line with the state government’s Penang 2030 vision which focuses on family, green and smart state to inspire the nation.

Earlier in his speech, Jagdeep said Penang had been certified as among the leading states in broadband adoption.

“We are also informed that Penang is already 100% fiberised and ready for 5G connectivity.

“The only main issue is the connection to the residential premises,” he said.

Jagdeep said by October, there would be a trial run in Cyberjaya to roll out the 5G connectivity.

He expects the coverage to reach Penang by 2021.

At peak Internet speed, the 5G connectivity is approximately 20 times faster than 4G.