Fernandez says not all MRT and LRT stations are suitable for TOD because some are smaller in size and not exactly transportation hubs. — Filepic

THE Transit Oriented Development (TOD) concept to encourage development near transportation hubs, if left unchecked, is vulnerable to abuse.

Under the Selangor Structure Plan 2035, development within 400m of transit stations such as LRT, MRT and KTM have potential to be TOD zones.

The purpose of creating TOD areas is to promote use of  public transport among residents.

Developers with land close to a public transportation system see potential in applying to be included in the TOD scheme.

After all, being merely 400m from transit stations means the possibility for developers to get approval for higher plot ratio.

In previous StarMetro reports, proposed development projects in mature neighbourhoods such as Section 14 and Section 16 in Petaling Jaya faced public objection due to insufficient infrastructure such as roads besides the problem of traffic congestion.

Residents also highlighted the need for sufficient amenities such as public schools and healthcare facilities.

As such, the question whether the TOD concept will work across the board remains to be seen.

Local government expert Derek Fernandez said not all land within 400m radius of transportation stations was suited for the TOD plan. 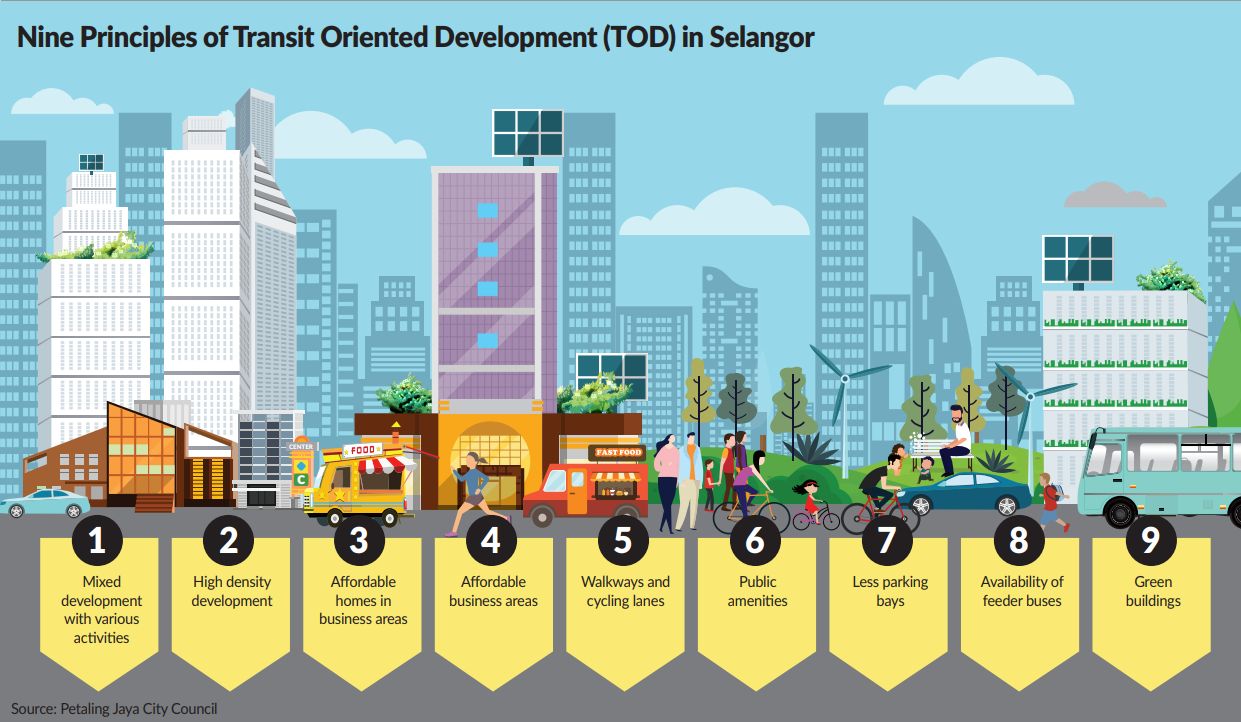 Under the Selangor Structure Plan, developers have to adhere to nine principles including providing for affordable housing in the TOD zone.

Other town planning experts opined that local councils should take the lead by working with landowners within an established zone.

The Selangor Structure Plan states plot ratio (density of residential and commercial units in a specified area) at 1:8 in a TOD zone.

Under this plan, developers have to adhere to nine principles, including providing affordable housing and business space in the TOD zone. Other principles include high-density development, eco- buildings, walkways and cycle lanes, public amenities and availability of feeder buses.

However, there is no mention of how plot ratios are decided upon.

To safeguard public interest and prevent abuse of the TOD plan, Petaling Jaya City Council (MBPJ) at its full board meeting in June 2016 approved a set of guidelines to better support the principles.

The guidelines provide more details on the principles such as the need for bicycle parking bays and use of energy-efficient materials as well as solar panels in promoting the green concept.

High plot ratio will inadvertently attract thousands of new residents and visitors to a neighbourhood, which makes residents in older areas worry about the burden on existing infrastructure.

To date, MBPJ has received several proposals to develop small pockets of land near train stations in the city.

Fernandez said not all MRT and LRT stations were suitable for TOD because some were smaller in size and not exactly transportation hubs.

As such, infrastructure surrounding the development might be insufficient, he said.

“KL Sentral and KLCC stations are good examples of TOD because there is sufficient land and infrastructure in the area.

“These places attract people to live and work there, and come for social activities. Easy access via public transport is an attraction.

“We want to create something of this nature.

“While we assume people will  cut down on the use of personal vehicles, residents in mature neighbourhoods worry about additional traffic that will be caused by a new development in a TOD zone,” he said.

The TOD concept in Petaling Jaya is an experiment in progress, which Fernandez said would benefit everyone if properly implemented.

“There is no denying that KLCC and KL Sentral are successful examples of TOD. There has been economic benefit around these areas.

“We need to have successful projects in Petaling Jaya to prove that the TOD concept will work here,” he said.

This will enable developers to work on a bigger area and build better infrastructure.

“At present, we have different landowners with different plans in one area.

“One landowner nearest to the LRT station may not want to develop the land while another owner further away may want to develop his land but lacks space to provide amenities such as bus drop-off points and parking bays.

“Our policies should encourage these lot owners to combine their parcels of land so there is sufficient land to be used for infrastructure needs such as roads,” said Fernandez.

Malaysian Institute of Planners president Ihsan Zainal Mokhtar agreed that the TOD concept was good and that it should be based on multi-mode and interconnected use of public transportation.

He said local councils should engage with landowners and the community to plan, as well as seek help from professional planners on how a TOD should be.

“It has to be comprehensive based on the surroundings, and everyone’s views matter,” he added.

Ihsan said TOD must be inclusive and safe for all.

Local councils, he said, should have better public engagement to explain details, which was lacking presently.

“For example, if I live in a low-density neighbourhood and there is going to be a high-rise project in the TOD zone beside my house, I may move away due to a lack of good understanding,” he said.

Local councils, he said should take responsibility to design TOD areas with public input as it would allow residents to visualise these developments.

“It is not set in stone that a piece of land located 400m radius from an LRT station is entitled to be a TOD zone.

“The radius can be more or even less, depending on the situation. Existing road conditions and how it can be better planned to suit the development are among things to consider,” he highlighted.

He said the TOD must cater to those with and without vehicles as well as the disabled. 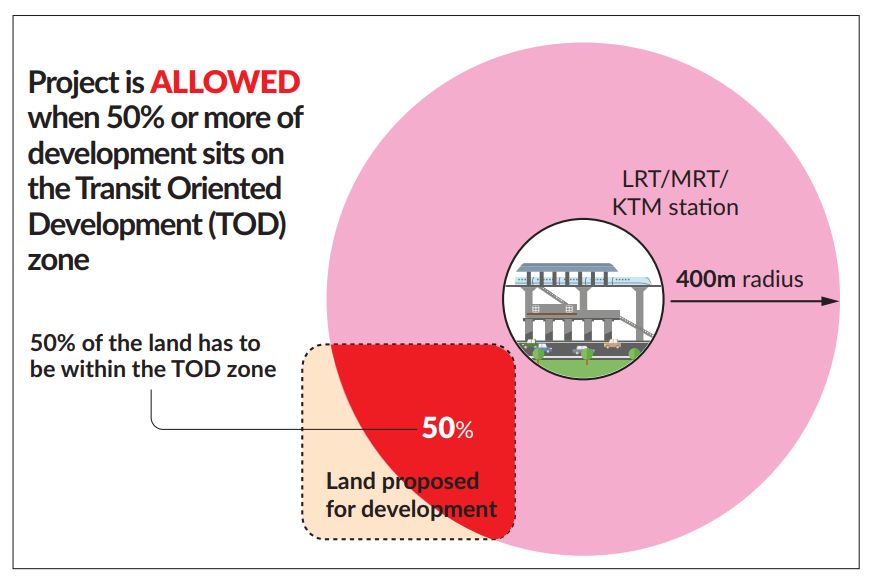 “The train stations must be safe, too, so people can be confident about using these facilities day or night,” he said.

A well-implemented TOD, he said, would add to the city’s vibrancy.

Ihsan said the plot ratio aspect was the least of problems as facilities within a TOD were more important.

He said local councils must create clear markings to indicate the TOD zone.

“The average person can walk about 400m from the station but anything further must be supported by transportation or the TOD will not work.

“The TOD area cannot be as far as 1km radius from rail transport because this will encourage people to drive.

“TOD will work better at the fringes of a central business district where there are multiple-nuclei development and multiple business centres within a city,” he said.

Sungai Buloh and Shah Alam have been identified as new growth centres.

“People in Shah Alam can travel to Kuala Lumpur without relying on their vehicles.

“If people still need to drive when a TOD zone has been established, then it is not serving its intended purpose,” said Ihsan.

Living Committee chairman Haniza Talha said there were cases of land­owners who obtained approval for a certain type of development but with the existence of TOD, had requested to change their original plan to take advantage of the increase in plot ratio.

Haniza said TOD was more of a bonus and incentive to build more affordable units.

“You have to fulfil a set criteria to get a higher plot ratio so that no one takes advantage of the TOD concept.

“I am glad there are stringent guidelines established in Petaling Jaya,” she said.

She said at least half of the proposed land must be within the 400m radius from a rail station.

“A landowner cannot just claim that the edge of their land touches the 400m limit,”  she said.

The maximum plot ratio is 1:8 but it is not easy to get approval for that ratio, said Haniza.

“Even when it is a 1:7 plot ratio, a developer needs to fulfil many requirements.

“I hope more councillors will take an interest to learn more about guidelines related to TOD,” she added. Can Bandar Malaysia be a game changer? 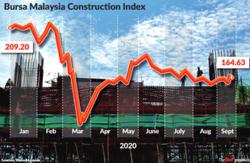