Pupils from SJK(T) Ladang Rasak enjoying their first Sports Day at the new field beside their school. — ART CHEN/The Star

AFTER more than a decade, SJK(T) Ladang Rasak finally had its very own Sports Day at a new field built beside the school in Bukit Subang, Shah Alam.

The school which was originally built in 1935 near the Bukit Jelutong Estate, was relocated to its current site along Jalan Metafasa, but there was no proper field to hold track and field events for years.

“There was an empty plot of land next to the school that belonged to Shah Alam City Council (MBSA).

“In 2016, I asked Sime Darby to open a field to be managed by the city council that was accessible to the pupils,” he said.

Muhammad Shakir said it was important for the children to have a place for sports.

“It is a win-win situation for everyone. The community gets a field and the students can use it to stay active several times a week,” he said, adding that the field would be handed over to the city council by May.

He said it was important for a school to have amenities for its students, and the recent decline in the number of pupils at the school could be caused by the lack of facilities.

School headmistress N.Kokilaveni was happy that her students had a chance to hone their athletic skills.

Previously, they only managed to partake in long jump and high jump events that were held at the school’s small badminton court.

“Now, we can gauge the pupils’ potential. We have seen some of them excel but they need proper training,” she said.

Kokilaveni is confident that some pupils will do well, especially after the school’s performance at a recent cross country run organised for the Petaling Perdana district.

One of them came in 13th place among 500 children.

There are 120 pupils at the school with 14 teachers.

Kokilaveni hopes MBSA will provide an official document to allow the school to have unlimited access to the field. 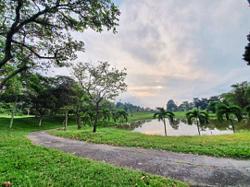