An undated photograph of Rex Cinema in Jalan Sultan during its heyday.

THE former Rex Cinema building in Jalan Sultan, Kuala Lumpur, is poised to be a hive of activity once again as plans are underway to rejuvenate the place.

Ask old-timers in the city about the cinema and many will share fond memories of how couples dated, families gathered and friends met at the premises.

Constructed in 1947, it was one of the most famous cinemas in the city.

After the historic screening of Jurassic Park in 1993 which was the first to feature a digital sound processor, Rex’s days were numbered as cineplexes became the in thing.

The building was subsequently used as a hostel with its big screen days a thing of the past.

During the recent Chinese New Year, a pop-up flower market to celebrate the Spring Festival helped put the building in the spotlight again.

But the team behind the event envisioned a greater goal – resuscitating Rex in an effort to bring new appeal to old buildings in the area.

“Rex was a centre for the community to gather. Families would come here for highly anticipated outings and couples would meet here for pak toh (date).

“We want to bring back this community spirit,” said architect Shin Tseng. Many have fond memories of Rex Cinema which is being repurposed to draw the crowd again. — Photos: KAMARUL ARIFFIN/The Star

Also in the team are architect Shin Chang, curator Beatrice Leong and several other partners and investors.

Positioning itself as RexKL, the aim is for the building to become an art and culture space when it opens in phases between May and September.

Several programmes including an exhibition in conjunction with KL Architecture Festival are in the pipeline.

The main hall with 1,000 seats will become a park-plaza zone complete with skylight and greenery.

The area where the first class seats used to become a theatre space for film screenings and workshops.

The ground floor, that used to be a 30-bay carpark, will be transformed into a retail space with both permanent lots and thematic kiosks.

This space was used for the Chinese New Year flower market.

As refreshing as these ideas may sound, the building will not undergo drastic renovations,

just some tweaks to give it a new lease of life.

“We will reactivate it by offering new content while leaving the building as it is.

“Rex had become unappealing over the past decade simply because it lost its usage,” said Leong.

“We will also look at what the city or the community in Jalan Sultan needs before deciding on what the building should offer.

“We believe they need a space to converge and communicate.” Asked what inspired the project, the three pondered on the question for awhile before Chang said, “a movement to make Kuala Lumpur better”.

“This movement is happening because different groups share the same vision to make our city better. They have organically come together,” he said.

The idea to rejuvenate Rex was first mooted in 2017, partly encouraged by the good response to the team’s other project, Chocha Foodstore, which was repurposed from a brothel.

“What worries me most is that people may get the impression that we are here to impose a concept, which is not the case at all. It is definitely not a top-down or one-sided approach,” Tseng reiterated.

“We are just people who love Kuala Lumpur and want to work with the community so that this area will evolve,” he added.

The team has spent time brainstorming with the Chinatown community to determine what would be the best use for this space.

“It is a very utilitarian building with a well-thought-out design,” Chang said.

Tseng added, “It was purpose-built for 1,000 persons; it created a journey for cinemagoers – from buying tickets to enjoying first class exclusivity.

“It offered a unique experience which is not available in today’s generic buildings,” he said.

Rex Cinema was first operated by Shaw Brothers, along with other popular cinemas including Madras, Capitol, Sun and Central.

Golden Screen Cinemas took over Rex Cinema from 1976 until 2002.

The building was gutted twice.

In 1975, burglars lit it after a failed robbery and the cause of the 2007 fire remains unknown. The first class seating area will become a space for film screenings or workshops.

Most defunct cinemas have been demolished or stick out like sore thumbs on the city’s landscape. RexKL offers a ray of hope to such cinematic relics.

Leong, however, said that this is not a cinema-specific project but for all vacant buildings which are aplenty downtown.

“Why build when you have all this vacant space? Kuala Lumpur is a city full of transition, people come and go.

“There are always spaces to be looked at, gaps to be filled with new programmes.

“Things will take on a freshmeaning every time you give it new content,” she said.

Tseng said downtown Kuala Lumpur has become a blind spot as no one pays attention to it anymore.

“We hope RexKL is a start in shedding light on the many resources we have here which are often overlooked,” he said. 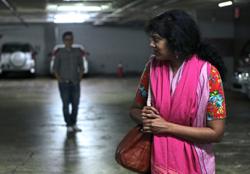