Disputes over forest clearing heating up

Penan and Berawan natives protesting against clearing of the forest next to Mulu National Park. — Filepic

THE dispute over clearing of forests for an oil palm plantation next to Mulu National Park in northern Sarawak is heating up by the day.

This Mulu case is a classic reflection of the native land woes and environmental issues that Sarawak has been facing for decades.Politicians, human rights groups and environmental activists are all having their say in this matter.

The affected and protesting natives in Mulu are angry but there are also certain native groups who have come out to support the clearing of the forests in the name of development.

I think the take by the Sarawak Society for Rights of Indigenous Peoples of Sarawak (SCRIPS) in this case is the most balanced and accurate so far.

SCRIPS secretary-general Michael Jok called on the Sarawak Natives Court to quickly arbitrate in the ongoing dispute between groups of Penans and Berawans against the oil palm plantation.Jok said the dispute had become more complex as there were now claims of corruption by one group of natives against another and counter claims.

“One group of natives came to Miri and told the local press that they represent the people of Mulu and they want the oil palm plantation project near Mulu to continue for the sake of socio-economic development. 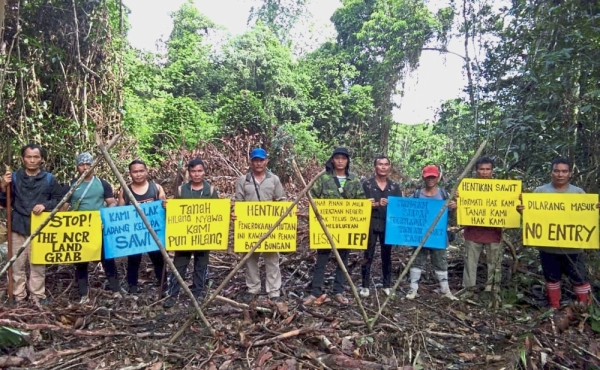 “On the other hand, the group of protesting Mulu natives who are against the project has refuted claims the Mulu natives want the oil palm plantation project to continue.

“This protesting group of natives lodged a report with the Malaysian Anti-Corruption Agency over allegations of corruption allegedly committed by certain quarters involved in the controversy.

“A police report had also been lodged by the Berawan natives of Kpg Melinau at Mulu National Park over the alleged desecration of their 300 year old ancient graves.“And at the Mulu fringes, human blockades by groups of Penans and Berawans are still ongoing.

“While these are happening, the relevant state authorities at the ministerial level are not offering any solution at all.

“We in SCRIPS feel that the Sarawak Natives Court should handle this case to find a solution before things get more complicated,” Jok said.

The forest clearing at the fringes of the Mulu National Park was to set up an oil palm plantation purportedly measuring some 4,400ha.The past week saw the Penans and Berawans staging blockades at various entry points and logged areas to stop the plantation workers from proceeding further into the forests.

He is trying to find an amicable solution to the dispute.

So far, no ministers in the state have offered a concrete solution.

At the federal level, Primary Industries Minister Teresa Kok is calling for a meeting to discuss the Mulu issue with Sarawak state leaders.

Jok, however, said since there were issues pertaining to native rights in and around Mulu, the Natives Court has jurisdiction to arbitrate in the disputes.

Whatever it is, the Mulu case is just one of thousands of such land disputes happening throughout Sarawak.

This Mulu case is more attention grabbing as it is happening just next to the Mulu National Park world heritage site.

I hope this Mulu protest will not lead to violent confrontations as had happened in similar cases in other parts of Sarawak in the past.