CLAD in her teal kebaya, Eva Khoo stood out in her custom-made piece which she said was inspired by traditional costumes worn by Malaysia’s multicultural society.

“It has elements of Malay, Chinese and Indian cultures.

“The top is made from songket fabric with a mandarin collar and it is paired with a saree skirt,” said the 42-year-old from Penang.

“The top and skirt are separates that can be mixed and matched with other outfits.”

Khoo said she worked closely with designer Leng Lagenda, who even designed the belt, dokoh (kebaya brooch) and gendik (head piece) to complete her ensemble.

“This is my first time show­casing this outfit, and I’ve been receiving a lot of compliments for it.

“I’m looking forward to collaborating with Leng Lagenda on more unique designs in future,” said the My Lovely Mum Malaysia and Asia 2012 champion.

Khoo was among 142 local and foreign beauty queens who participated in a kebaya fashion parade held at Da Men Mall in Subang Jaya, Selangor. 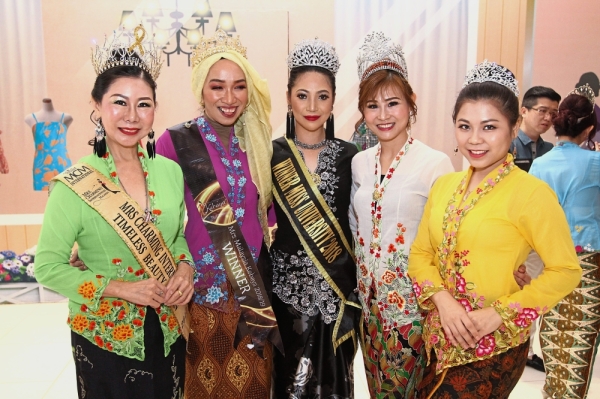 Beauty queens past and present gathering at the kebaya fashion parade organised by Miss Malaysia Kebaya while dressed in multicoloured kebaya that featured both traditional and modern designs.

The event was later recognised by the Malaysia Book of Records (MBR) as “Most Number of Beauty Queens Wearing Kebaya in a Fashion Parade.”

Having worn the kebaya in beauty pageants before, Russian talent Natalya Bronzova described the kebaya as an outfit that “makes women look very feminine and move elegantly”.

“I’m planning to have a kebaya custom-made.

“It will be white in colour with gold or black patterns and semi-precious stones as embellishments,” said the Mrs Malaysia Global Universe 2018/ 2019 second runner-up.

Bronzova, who is a fashion designer, said she would like to design her own collection of kebaya in future. 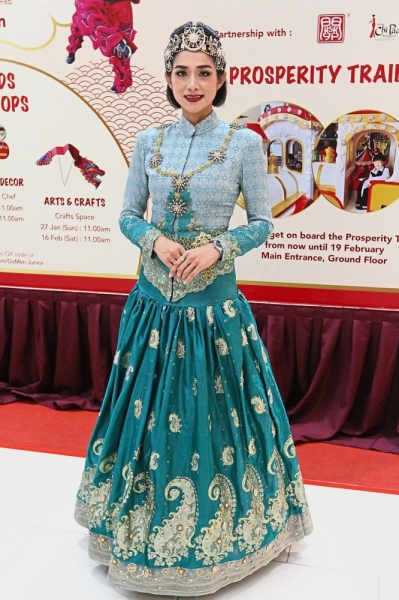 Khoo standing out in her custom piece which was inspired by traditional costumes worn in Malaysia’s multicultural society. The top is made from songket fabric with a Mandarin collar, and it is paired with a saree skirt.

“The different kebaya worn by the women today have inspired me to come up with my own collection,” she said.

“I have worn a variety of national costumes when attending events in different countries, and for diplomatic functions, and I find all the costumes very beautiful.”

Hee said the 142 beauty queens represented past and current MMK participants, as well as a few guests from the Philippines, Russia, South Africa and Vietnam.

“Their ages are also very diverse. The youngest is 17 while the oldest is over 70,” he said, adding some wore custom-designed kebaya while others had their outfits sponsored.

“Today’s event aims to promote Malaysian culture and tourism through the kebaya.

“It also serves to recognise past and present beauty queens, encourage unity and foster cultural exchange.”

Hee said MMK started in 2011 as a competition for single women (Miss), but later expanded to include married women (Mrs) to make it more inclusive.

“MMK is a platform to educate youngsters on the importance of the kebaya as part of our culture and tradition,” he said.

“A kebaya can have either traditional or modern designs to appeal to different people.”

Hee said the certification by MBR gave the MMK event a form of recognition and respect by a well-known body.