A colourful traditional Chinese dance performed before the flame-watching ceremony in conjunction with the Cheng Chooi Chor Soo Kong’s birthday at the Snake Temple.

A STEADY stream of devotees thronged the Hock Hin Keong (Ban Ka Lan Snake Temple) in Bayan Lepas, Penang, to observe the birthday of its resident deity Cheng Chooi Chor Soo Kong which fell on the sixth day of the Chinese New Year.

For the Neoh family, it was a memorable and meaningful day as they visited the temple after missing the celebration for three years.

Neoh Eng Keat said his family used to visit the temple every year until his wife, Julie Antika, 33, gave birth to their youngest son who is now four years old.

“We are here this year as my wife wanted to snap a photo with the snakes and my son is older now,” the 45-year-old coffee shop owner said when met at the temple on Sunday.

His sons Andy Neoh Zhi Hui, eight, and Tony Neoh Zhi Zhong, four, were very afraid as their father and mother had a snake wrapped over their necks.

“I am very scared, I dare not touch the snake,” Zhi Hui said, adding that it was his third time at the temple. 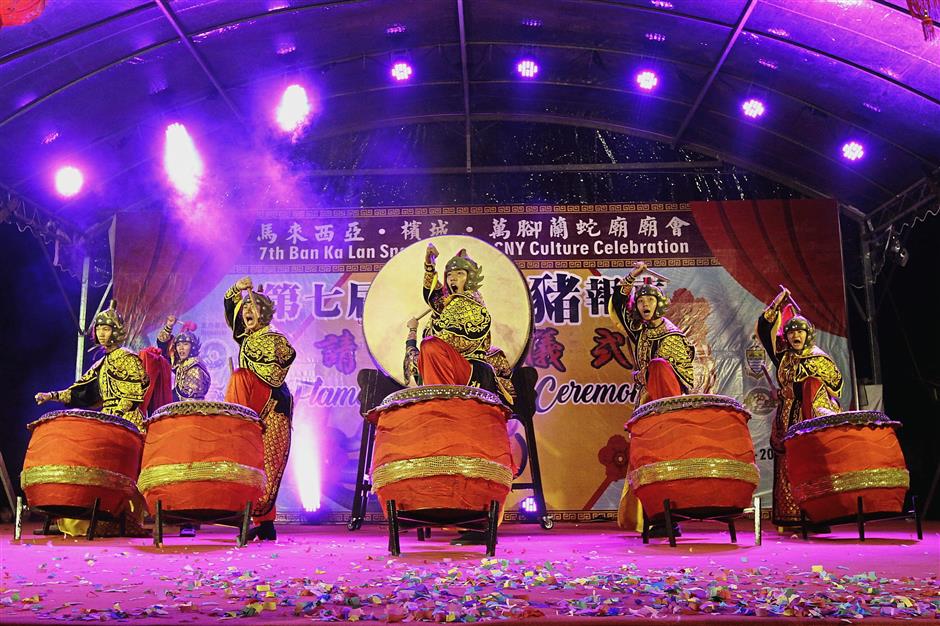 The Warrior Drums performers in action.

Eng Keat said he prayed for his family to be safe and healthy throughout the year.

Also spotted at the temple was the Khor family who posed for a family photo with the reptile.

Khor Ewe Hock, 72, who is wheelchair-bound, had a small snake on his head and a larger one on his neck as he took a photo with his wife, son and daughter-in-law Teh Mui Hoon.

His 66-year-old wife Goh Gek Kue said they had been coming to the temple faithfully for 31 years. 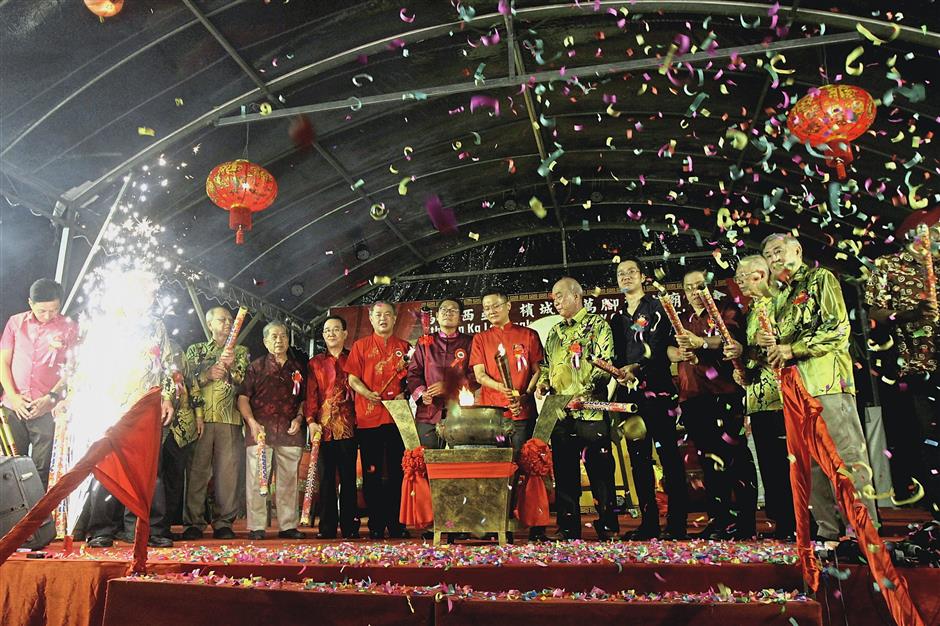 “After Swee Pin became the deity’s godson, he became a good boy and was more disciplined,” Goh said, adding that her 31-year-old son Swee Pin used to be very mischievous when he was young.

The Snake Temple is managed by the Hokkien Kongsi, Penang.

Its trustee Datuk Khoo Kay Hock said the association which was established in 1856, was made up of the big five clans with surnames Cheah, Khoo, Lim, Tan and Yeoh. 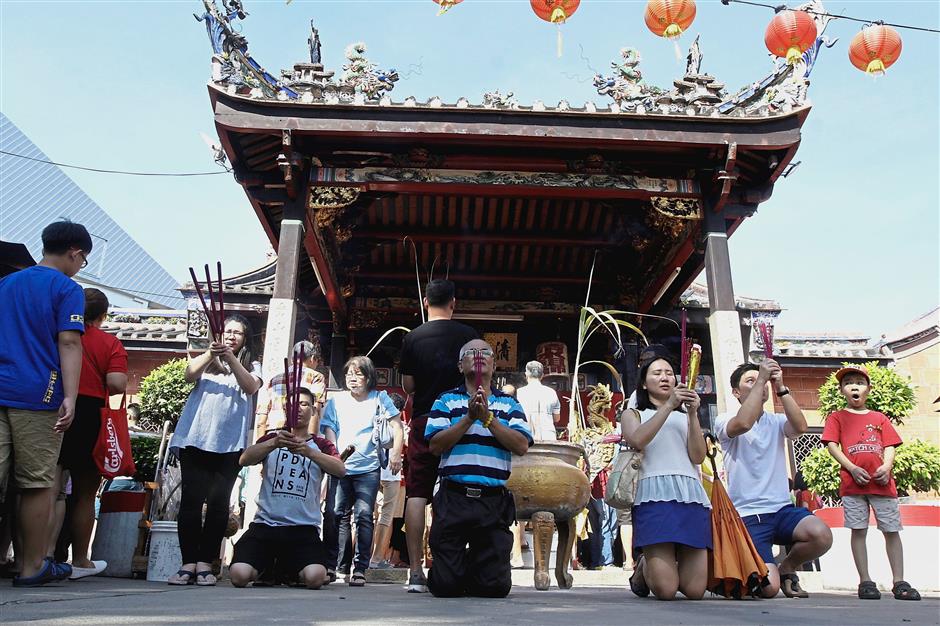 Devotees praying with joss sticks at the Snake Temple to commemorate the resident deity’s birthday.

“This 1.82 hectare land was donated by the once wealthiest landowner in Penang, David Brown.

“It is said that he donated this land after his mother was healed of her illness after being treated by the disciples of the deity here,” Kay Hock said.

It is believed that the deity was a Chinese Buddhist monk who provided free medical treatments to the people and many people were healed under his care. 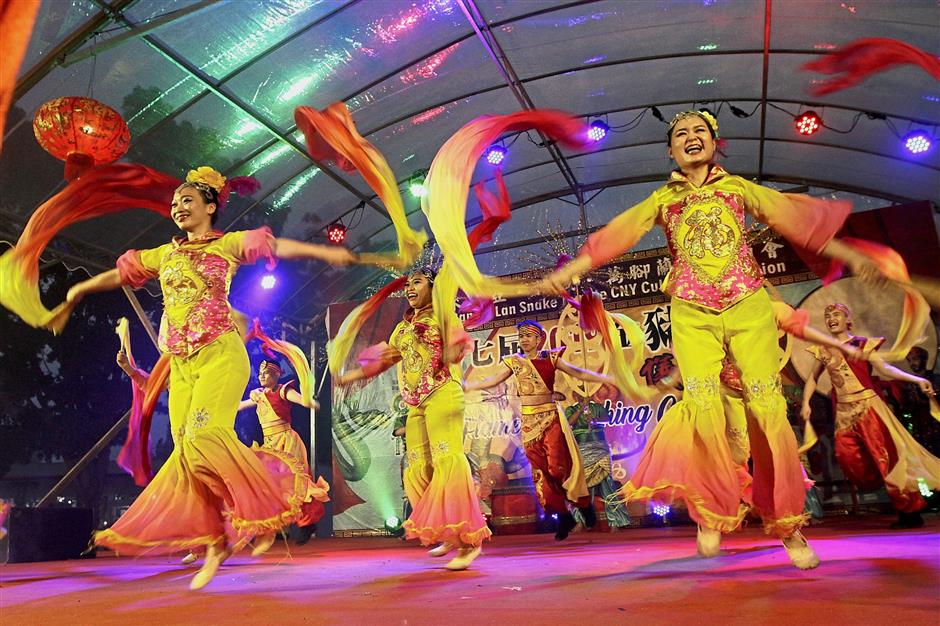 Spectators were treated to a variety of dances by adults and children dressed in costumes to mark the Year of the Pig.

Legend has it that the deity gave shelter to the snakes in the jungle and when the temple was completed, the snakes moved in and were regarded as the deity’s protectors.

When asked why people offered eggs to the deity, Kay Hock’s wife, Datin Rita Khoo shared a folklore which was passed down to her by her mother.

“It is said that the snakes will consume the egg through a small hole on the shell at night.

“My mother told me that on the next day, there will be empty egg shells on the trays,” she said. 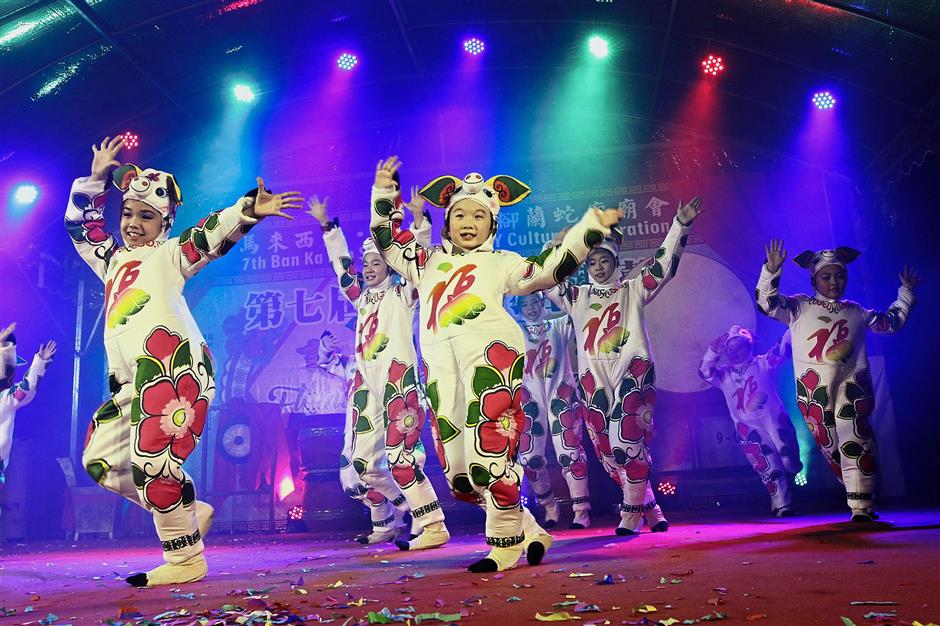 However, Rita busted the myth by saying that this phenomena does not take place in the modern world but instead, the temple would donate the eggs to charitable organisations such as orphanages.

On Saturday night, thousands of devotees gathered at the temple to watch the Chneah Hoay (flame-watching) ceremony.

Through the ritual, devotees learnt about the deity’s predictions on how the economy would fare this year.

The entertainment lined up included a snake dance, dragon dance, a lion dance on stilts and multi-cultural performances with the main highlight being the Warrior Drums performance.