FOUR factories in the industrial area of Sungai Lalang was ordered to close until further notice, after the Semenyih Fire and Rescue Station found drums containing chemical toxic waste behind a steel frame factory.

Semenyih Bomba chief asst fire superintendant Zainal Elias Abdul Aziz said an area of 300m from where the affected site will be closed off to the public, including the owners and workers of the factories in the area.

"We are doing this as a safety precaution, as we have yet to determine what the chemical is," said Zainal Elias.

A total of 172 drums of unknown chemical waste were found on a plot of vacant land in the industrial area.

Selangor disaster management unit head Ahmad Fairuz Mohd Yusuf said from the smell of solvent in the vapour, there could be a mix of hydrocarbon compounds commonly discharged as industrial waste. He said it was possible that the illegally discarded drums may contain the byproducts of a paint manufacturing company.

Ahmad Fairuz said Kualiti Alam, a chemical waste company, has assessed the situation and containment measures have been put in place to prevent further contamination to the ground and surrounding streams. 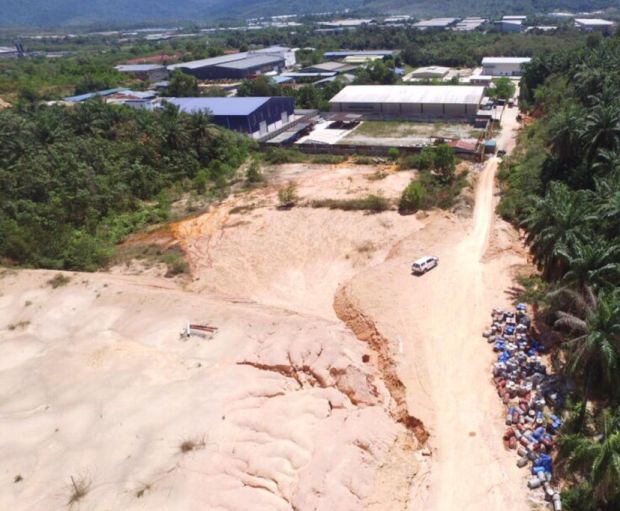 A drone shot by the Selangor Disaster Management Unit of the chemical contamination in the Sungai Lalang industrial area.

As the chemical compound is heavier than water, three retention ponds have been dug at the foot of the dumpsite to catch the escaping flow from several punctured drums. Once the toxic flows have ceased, the drums will be sealed to prevent vapour from escaping.

Earlier, pictures circulated on WhatsApp showing a label with the alleged chemical waste management company's name stuck on one of the drums was found to be fake.

Later, workers returning to their quarters at the affected factories were advised to leave the area after retrieving their personal belongings by the police. The workers were later seen leaving the area.

In an answer to queries of other factory workers who have not vacated the area, Ahmad Fairuz said the police, Bomba and civil defence have been stationed at the entrance to man the area round the clock to render any assistance.

A factory owner of a sofa company said it was not impossible for illegal dumping to take place in the area, as the streets are unlit. In the night, he said the darkness was a perfect cover for illegal dumping activities. He further added that the dumping could have taken place during the long Chinese New Year break.

Residents living nearby said this could not have happened at a more sensitive time in view of the Semenyih by elections. They also expressed their frustrations at the authorities for not taking action against the many illegal factories in the area. It was revealed that just two days before the discovery of the chemical dumping, there was a tyre burning incident in the same area.

Anyone with information pertaining to the illegal dumping of the chemical compounds can call Zainal Elias at 011-32362339.