MBSA unveils smaller RM458mil budget for 2019, with RM119mil for development

THE Shah Alam City Council is setting aside RM119.14mil from its RM458.53mil budget for development within the city next year.

The allocation will be used for new and on-going projects. From the total amount, 54.9% will be used to build and maintain buildings, infrastructure, among other things; 45%  for supply and services; and 0.1% for fixed payments and charges.

The main developments to be carried out next year include the continuation of work to build stalls, two-storey shops and a waste house on Jalan Pulau Angsa, Section U10 (RM3.1mil), construction of sports utilities room, changing room and seats for spectators at the football field along Jalan Kerjaya, Section U1 (RM3mil) and  a 15km bicycle track within the city (RM2mil).

RM4mil will go towards works at the Shah Alam Lake Park, which include installing a rhythmic water fountain at Lake West, the construction of a bridge at Pulau Undan, and improvements to the waterfall system at Tasik Tengah.

The 2019 budget tabled yesterday showed an estimated RM449.41mil in revenue (vs RM461mil previously), with expenditure at RM458.53mil (vs RM484mil), translating to a deficit of RM9.12mil, which will be covered using the council's reserve funds.

The budget was first brought up for discussion with close to 100 Shah Alam residents in Sept, prior to the council meeting.

"Residents placed emphasis on matters such as infrastructure – from road and street to lights, slope and drainage – to waste management, landscape and recreation, low-carbon city and community programmes, among others.

"We will go through the short-term plans, about 56 of them, tackle what we can first," he said.

For the 2019 management expenditure, MBSA allocated RM339.39mil, which amounts to 74% of total expenditure. It represents a drop of RM19.04mil from the previous year.

Supplies and services take up the largest portion at RM258.37mil for repairs and maintenance works.

Ahmad Zaharin said the biggest drop was in rental revenue, by 19.8%.

"Among the reasons for this decrease in revenue is the lost of rental revenue from Stadium Utama Melawati and the Aquatic Centre, which were taken over by Darul Ehsan Facilities Management Sdn Bhd.

Acquisition from investments is the main revenue in this category, contributing 24.2% from the total non-revenue tax," he said.

Aside from using the council's allocation, Marris fund from the federal government, estimated at RM63.4mil, will be used for road maintenance, upgrading and repair works for street lights, drainage, slopes and tree trimming.

For flood mitigation projects, the council will rely on infrastructure contribution funds (ISF) and funds from the state government through the social trust account.

The city council will also add two more Smart Selangor bus routes connecting the Section 19 KTM station to Kota Kemuning, which will pass through Taman Sri Muda, at the cost of RM1.3mil, and from Batu 3 KTM  station to PPR Hicom at a cost of RM1.66mil.

Ahmad Zaharin said bicycle tracks within the city would be launched by Selangor Mentri Besar, with no set date yet, after which MBSA will push for the public to utilise the bicycle tracks, encouraging them to cycle as a mode of transport.

He added little improvements could be be made, and the council would ensure that vehicles did not misuse the tracks to park or drive on. 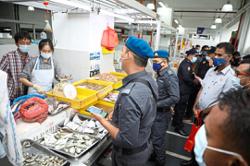