Portrait of a Chinese opera lover

CLASSIC Teochew Opera stories came to life in Penang through the sterling performance of Tan Wei Tian — a relative veteran despite being only 15.

Clad in full regalia, the Singaporean teenager first played off 16-year-old co-star Yap Ting in an excerpt from the love tale, The Butterfly Lovers.

She re-emerged as a conflicted wife opposite 53-year-old Tan Kah Noi’s father-in-law and magistrate character in the morality piece, Prosecuting the Husband.

In between, Wei Tian did two solonumbers that were well-received by the crowd watching at the Cheah Kongsi in George Town.

The recent show was presented by Nam Hwa Opera as part of the ConneXions — Passion Made Possible programme for the George Town Festival (GTF) 2018’s final weekend.

It was a collaboration between the Singapore Tourism Board (STB) and the National Arts Council Singapore with the GTF, aimed at celebrating the strong ties between both cities.

In a Q&A session with spectators following the performance, Wei Tian said she has done opera for 12 years now. Her interest started when she was just over two.

“My grandma took me to watch performances, and I was mesmerised by the elaborate costumes, headdresses and music.

“I fell in love and am constantly falling in love with it in many, many ways. Perhaps I was an opera performer in a past life,” quipped the secondary school student who has featured in 56 productions to date. 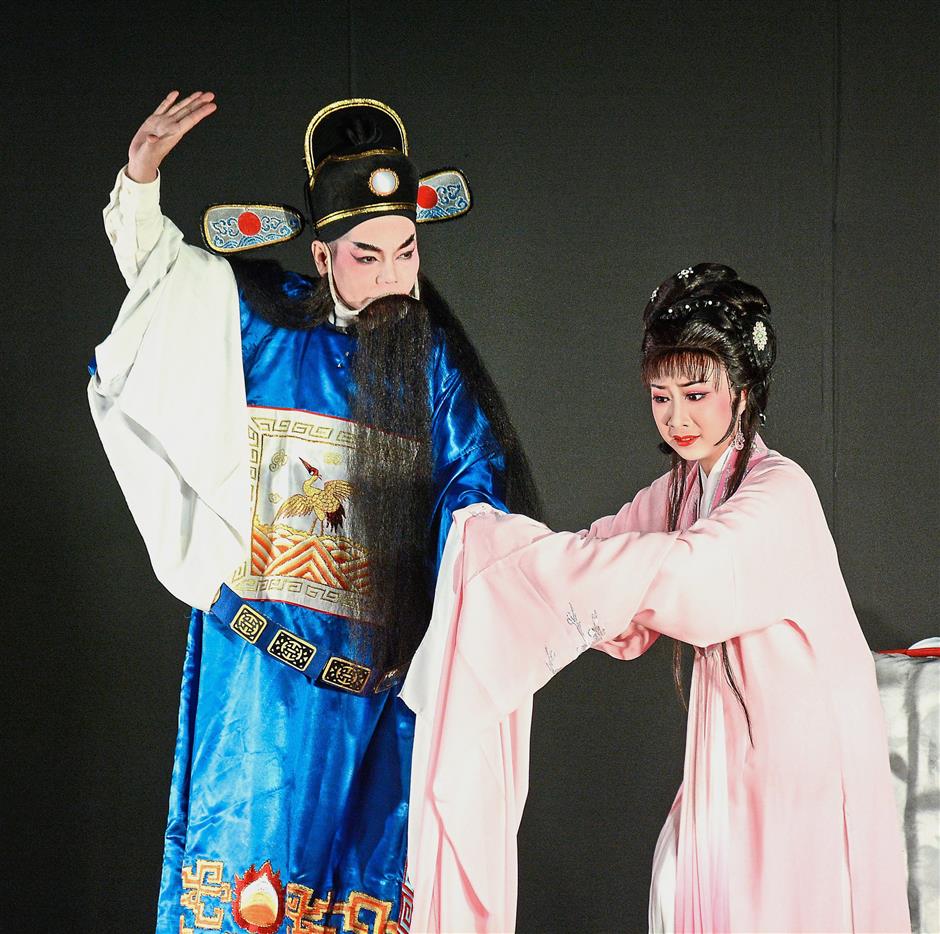 Young Wei Tian (right) playing the role of the conflicted wife in the well-known morality tale Prosecuting the Husband.

Among other achievements, she is also the youngest Passion Ambassador named by the STB; had a turn in the 2014 film Wayang Boy, and finished second in the open category of the Voice of Teochew 2015 competition.

While Wei Tian admits that opera is not a fashionable pursuit among peers her age, she feels a sense of responsibility to ensure the traditional artform is kept alive for years to come.

“The younger generation do not appreciate it as much. Most who are still involved are getting on in years. Thus, I hope to revive interest.

“Opera allows me to spend my time meaningfully,” she pointed out, adding that the challenge is juggling studies with her training to fully master the finer nuances of the artform, from movements to lyrics.

The amateur troupe was formed 55 years ago in Singapore by a group of Teochew Opera enthusiasts, and now puts on about 10 shows yearly, often to raise funds for charitable causes.

The three-day (Aug 31 to Sept 2) ConneXions: Passion Made Possible programme also featured many other music, visual and traditional art, film and food events at various locations around George Town.

Highlights included a Singapore Designers’ Showcase at Artlane featuring a collaborative wall mural and other creations, as well as musical performances and servings of Malaysian-Singaporean heritage dishes at China House.

An exclusive screening of Glen Goei’s The Blue Mansion film was also held at the titular building. The programme ended with a closing party at the QE2.

“Singapore and Malaysia are both rich in heritage and culture with a strong community of creative minds, and a flourishing local arts scene.

“The showcase is truly an epitome of the friendship between two countries.