RESIDENTS in Sungai Chua’s Taman Seri Kota are upset that they have lost their playground less than a month after Kajang Municipal Council (MPKj) refurbished the facility.

The 0.3ha open space along Jalan Seri Kota 2 is now fenced up and overgrown with grass.

The unhappy residents brought their complaint to the attention of MCA candidate in the Balakong by-election, Tan Chee Teong.

They said they were not aware that the status of the land had been changed to allow commercial development.

“We were told that the transaction was done in 2014. There was no signboard put up to inform residents nearby,” said Wong Yew Fai who has lived in the Seri Kota housing area for nearly 10 years. 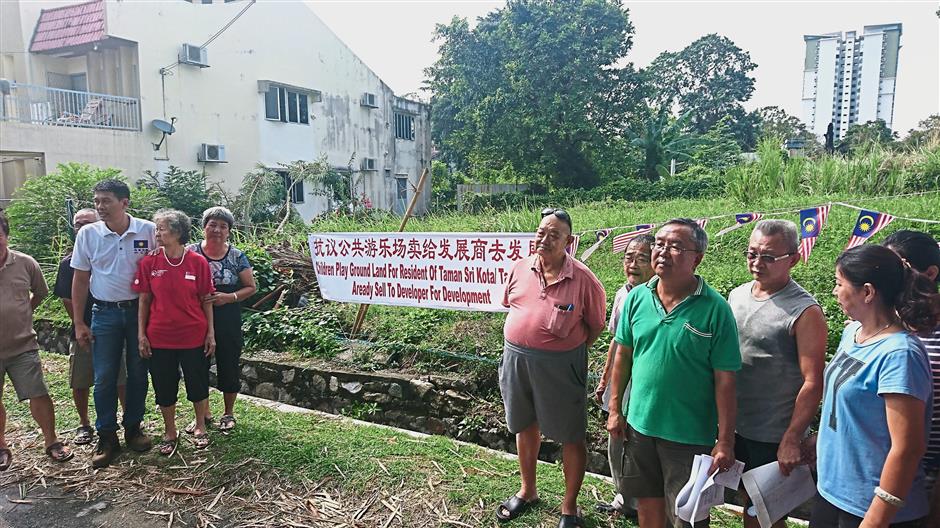 Tan (extreme left) showing support for the plight of Taman Seri Kota residents in Sungai Chua who have lost their playground.

“The playground upgrade was completed at the end of January this year.

“In mid-February, a developer fenced up the property and the equipment was cleared away,” Wong said.

He said residents had written a letter to MPKj’s Urban Planning Department in April about the matter.

“We went personally to the council to find out the status of the land. It was only then that they showed us an official letter to the developer from the council.”

The letter stated that planning approval for the land had been given in December 2014, and that the developer was required to give a replacement open space before beginning any work.

Tan said he was puzzled how planning approval was given for the land as it had been used as a playground for the housing area for over 20 years.

“How can the status of the land be changed, and is the area suitable for a condominium?” he asked.

Tan added that the residents nearby should have been consulted.

“What are the guidelines? How can you deprive residents of a recreational area,” he said in asking for clarification from MPKj.

The Balakong by-election will see a straight fight between Tan and Pakatan Harapan’s Wong Siew Ki from DAP. Polling takes place this Saturday.