Spectacular view of the Mediterranean from the cliff town of Sidi Bou Said, Tunisia.

THIS Matta Fair Selangor Carnival, Golden Tourworld Travel Sdn Bhd (GTT) invites you on trips into the exotic lands in the Middle East, Africa and Tibet.

Starting at the bustling Iranian capital of Teheran, travellers will be driven to the heart of Isfahan province.

This region holds attractions like the traditional Persian Fin Garden at Kashan, the landmark Borujerdi House with its stylish Persian architecture, the “red village” of Abyaneh, to name a few.

Isfahan also has sites such as the 17th-century Imam Mosque and the Sheikh Lotfollah Mosque, the Ali Qapu – or Magnificent Gate – Palace, the Chehelsotoon Palace, and famous bazaars.

Other sight-seeing spots are the oldest bridge in Isfahan Khaju Bridge and Vank Cathedral.

In Yazd, visit the Tower of Silence and the “Fire Temple” where the Zoroastrian religion flourished, and the Jame Mosque.

In Shiraz, embark to Persepolis, ceremonial capital of the Achaemenid Empire and visit tombs of old Persian kings at Naghshe Rostam and Pasargadae.

Sightseeing continues at Vakil Bazaar and mosque, the Eram gardens, the Nasir Ol Molk Mosque, the Holy Shrine of Shah Cheragh from outside, and more.

Back in Teheran, behold artefacts from prehistory till the Islamic era at the Archaeological Museum, the Golestan Palaces and others. This package is 9D/6N, flying with Iranian airline Mahan Air. 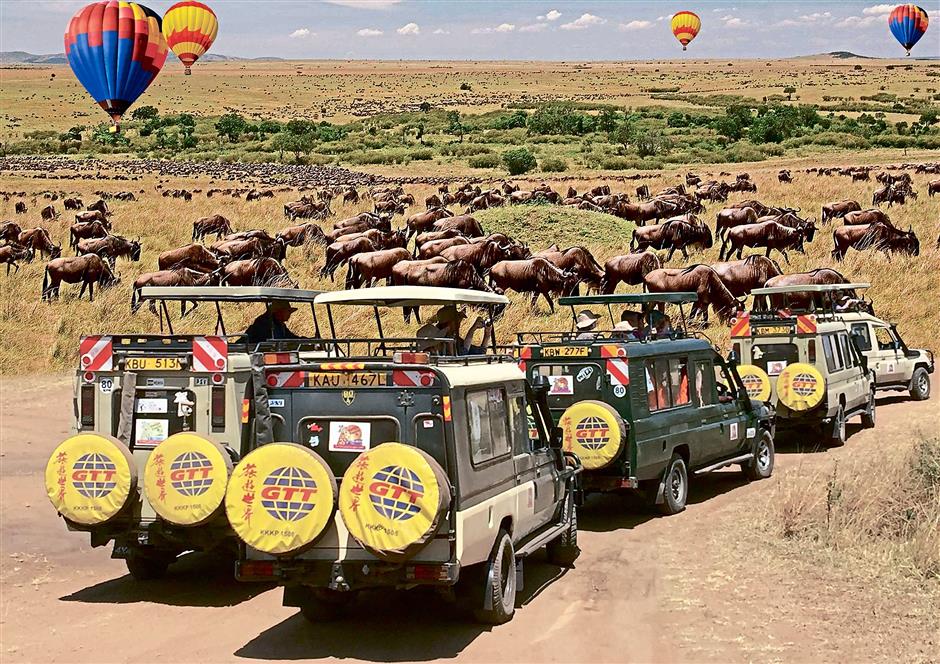 Take a ride on the wild side and catch a glimpse of the wild animals in their natural habitats in breathtaking Kenya.

Take a ride on the wild side with GTT in this 9D/6N Kenya adventure package.

At Kenya’s capital of Nairobi, visit the Parliament buildings, Kenyatta International Conference Center and the breathtaking view of the city as well as shopping.

In the Aberdare region, travellers are treated to luxury lodges that overlook the Yasabara waterhole, haunt of a variety of forest game.

At Naivasha, at the foot of the Rift Valley Escarpment with Lake Naivasha as an important horticultural area of Kenya.

From there, venture into the Maasai Mara National Reserve, renowned for 1,510sq km of open rolling grasslands watered by the Mara River and teeming with wildlife. There, travellers will follow the annual wildebeest migration in July and August, when these beasts move north from the Serengeti with their predators.

The 9D/6N Kenya package starts from end of June and stretches through to early September. It covers locations like the capital Tunis, the remains of the old city of Carthage, the village of artists Sidi Bou Said, Museum of Bardo, the Zaitouna Mosque, mosque of Sidi Mehrez and the mausoleum of Husainides princes.

From Tozeur, traverse canyons by train or four-wheel drive to a Berber village within the mountain oasis of Chebika and picturesque Tamerza.

At Nabeul, shop for speciality handicrafts like pottery, matting of rush, embroidery and more, then onwards to the fishing port at Kelibia, Kerkouane for a Carthaginian archaeological site and El Haouaria.

The Ethiopia 10D/7N package begins at the capital of Addis Ababa, with its National Museum of Ethiopia.

The country is home to many Orthodox Christianity sites like the Trinity Cathedral and the Church of Our Lady Mary of Zion in Axum.

Other notable sights include Lake Awasa, the local Borena village of Dublock to visit the singing wells, the El Sod crater lake, Benna and Ari tribes at Jinka for a barter trade, the Mago National Park, Turmi town home of the Hamer people, Omorate for the Dasenech people, Arba Minch and Lake Chamo.

At the world’s roof

GTT has a 10D/9N package to Tibet that starts from Xi’an of Shaanxi Province in China, then goes on to Xining, Qinghai then to Lhasa via the Tibetan Railway.

At Lhasa, sights include the Potala Palace, Jokhang Temple, Barkhor Street and more.

Other sights include Yamdrok Lake, Karola Glacier and Smira Pass, then Shigatse to see the Tashilhunpo Monastery, the base for Tibetan mastiffs. A historical and archaeological city in southern Jordan, Petra has been occupied as early as 9,000BC by the Nabataeans.

This 13D/10N package to Turkey covers Amman and Petra in Jordan, then Istanbul, Canakkale, Ephesus, Pamukkale, Cappadocia and Ankara.

Attractive sights travellers will get to see are Petra, Topkapi Palace, the ruins of Troy, coastal town of Kusadasi, the archaeological site of Ephesus, the moon-like landscape of Goreme Valley, Anit Kabir and the mausoleum of Ataturk, the Grand Bazaar of Istanbul and more.