Juicy feast for the eyes

Lee showing off ‘Oriental Dragons’ (left) and ‘Combs of Gold’.

THE Art Gallery Penang’s Tropical Fruit Fest group exhibition features artworks so juicy that viewers may be tempted to reach out and take a bite.

But hold that urge, for the 31 pieces done in various mediums by 13 talented Malaysian artists are meant for the eyes only.

While “Combs of Gold” depicts bananas hung alongside an oriental door, “Oriental Dragons” shows a dragonfruit in a famille rose bowl.

“The fruits themselves are beautiful.

Simple pleasures are depicted in Alex Leong’s ‘A Joyful Harvest’.

“The colour of bananas represents good fortune while the dragonfruit reflects my Chinese name, Loong.

“I paired them with oriental elements to create a classic feel. By playing with shadows, highlights and textures, one can make common subjects unique,” Lee said at the opening ceremony.

In the colour pencil and ink piece “Tiger Munching Durian”, he brings to life an aspect of village folklore that has rarely been documented.

Villagers and orchard farmers speak of tigers knowing how to crack open durian and eat the fruit clean, though few actually witness it, Nasir revealed.

He was an oil and gas technician and his work often took him up high structures where he got a bird’s eye view of nature. 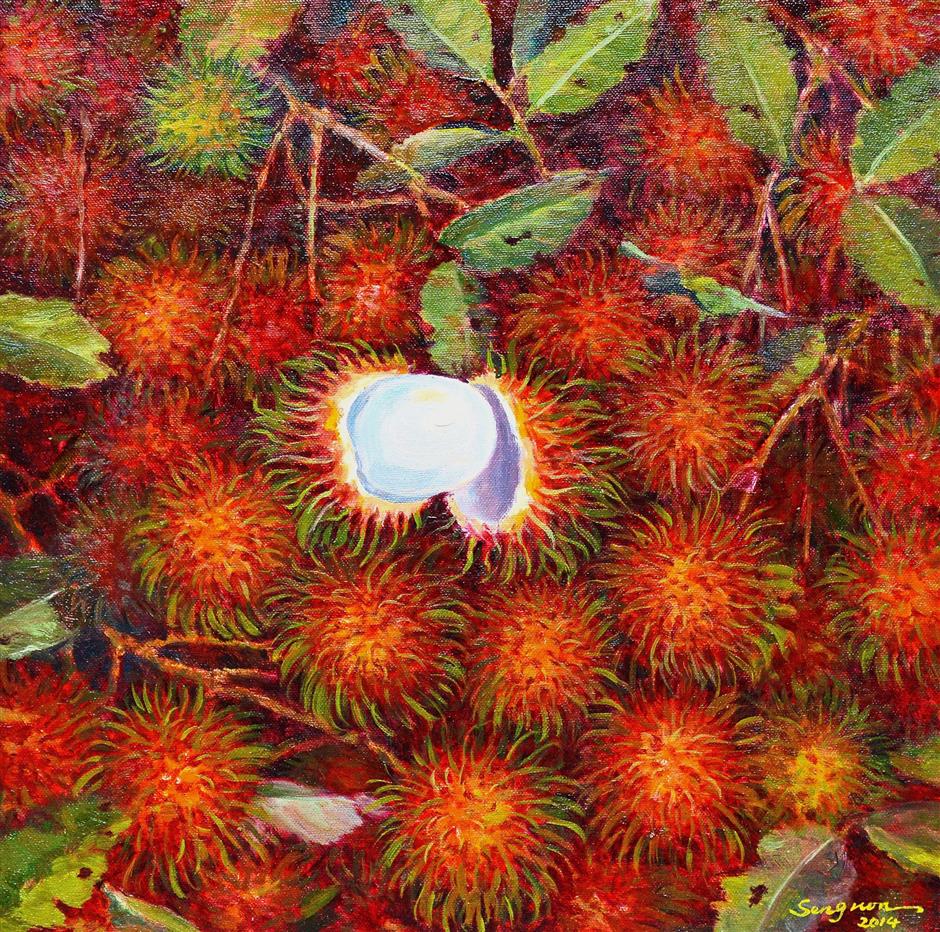 “These monkeys are Penang’s largest primates and among the most important seed dispersers.

“But with the clearing of hills and building of highways across their habitats, their range is curtailed,” Nasir highlighted.

“The squirrels are frequent guests in my garden. I often see them climbing up and down trees,” Tan said of his inspiration.

Gallery director Tan Ee Lene said the exhibition was organised in conjunction with the Penang Durian Festival that is ongoing until July 31.

“Being in tropical Malaysia, we are blessed to have an extensive and amazing variety of edible fruits, be they seasonal ones or easily available throughout the year.

“Despite being ordinary objects, the fruits are often a favourite of artists. “Their different colours, textures and associated scents appeal to people’s senses and allow messages to be communicated,” said Ee Lene.

Offering some historical context, she said artistic representations of fruits date back 3,000 years to ancient Egypt.

Archaeologists have found paintings of fruits on the walls of pyramids.

The Egyptians believed that such food items would become tangible and available for the deceased to feed on in the afterlife.

“A glass bowl of fruits was also commonly included in Roman paintings so the elite could boast about the delicacies and the generous hospitality they offered,” she said.

The exhibition runs until July 7 and is open for viewing from 2pm to 5pm, from Friday to Sunday.

From Monday to Thursday, viewing is by appointment only. ‘Watermelon No 5’ by Lok Kerk Hwang.

The gallery is located at Level 4 of Bellisa Row in Pulau Tikus.