MIRI: The state government has set plans to open up the northern frontier by building better links between the Miri and Baram divisions.

The plans will involve creating road connections from Miri to Long Terawan near the Mulu National Park, as well as a digital network that provides coverage to rural settlements in Ulu Baram.

Sarawak Chief Minister Datuk Patinggi Abang Johari Tun Openg unveiled these plans yesterday, but stressed that they could only be accomplished with the help of the Federal Government.

“We in the state government have drawn up a plan to open road links from Miri city all the way into Long Terawan, at the entrance to the Mulu National Park.

“Prime Minister Datuk Seri Najib Tun Razak launched the construction of the Marudi Bridge which is a RM84mil project.

“This bridge by the Federal Government is part of the plan to link Miri with Ulu Baram.

“Once the bridge is built, there will be seamless connection between Miri and the interior of Baram.”

Abang Johari said the link would enable the state to open up other social and economic frontiers, including the digital corridor.

“We need to work closely with the Federal Government to achieve this,” he said.

The Sarawak Barisan Nasional state government kick-started its Sejiwa Senada outreach campaign which began from the hot seat of Miri. 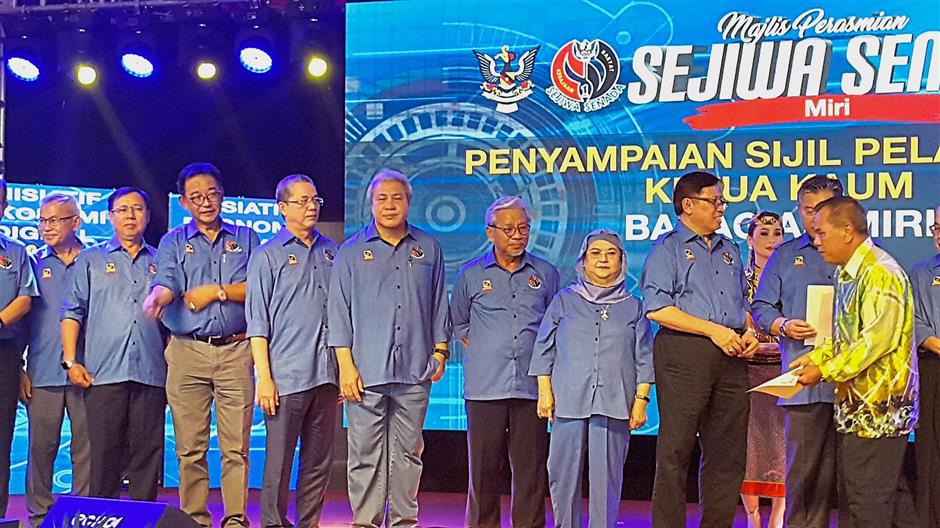 Abang Johari presenting appointment letter to a community leader during the launch of state-level Sejiwa Senada outreach campaign in Miri.

Concerts, singing contests, exhibitions, sports and games are also in the programme, while the food galore brings out a carnival-like atmosphere.

Tens of thousands of people attended the launch and took part in the activities.

After Miri, the Sejiwa Senada campaign will take place in other parts of Sarawak.

“We expect to see Sejiwa Senada attracting crowds of more than 1.6 million people this year,” said an organiser at the Miri event.

The state secretariat is coordinating the Sejiwa Senada programmes.

Abang Johari also noted that Barisan must wrest back Miri and defend Baram in the coming polls.

“Sarawak Barisan must win so that we can help the party win at the federal level,” he said.

Meanwhile, PKR’s Dr Teo Yu Keng who won the Miri parliamentary seat in the last elections said he would defend the seat, which he won with a majority of 1,944 over SUPP’s Datuk Sebastian Ting Chiew Yew.

Ting, who is SUPP secretary-general, said he might stand against Dr Teo again.