DBKL turning alleys in Golden Triangle into pockets of sunshine

This alley that was once a breeding ground for drug addicts is now a vibrant gateway between the old buildings.

DINGY alleys, unappealing sidewalks and lanes, and creepy narrow pathways riddled with rubbish, drug addicts, drunkards, vagrants, and snatch thieves in the city will be repurposed into vibrant, colourful and marketable tourist attractions.

The transformation into artsy little getaways will bring life back to areas such as behind Bukit Bintang’s old flats and hotels which had become choked with rotting rubbish, stagnant water, and human and animal waste.

Kuala Lumpur City Hall (DBKL) has identified 10 locations in the Golden Triangle in dire need of sprucing up.

This is to encourage more people to live in the city centre and attract tourists to visit older parts of the federal capital. Mahadi (second from right) explaining to stakeholders the concept of the Alor stream at the project site. Looking on is Natasha (right).

DBKL project management executive director Datuk Mahadi Che Ngah described the refurbished back lanes as “pockets of sunshine”, referring to the bright murals gracing some of the older buildings in the area.

“Alleys and side lanes in any city of the world are always associated with crime and unsavoury activities and repel people; but we want to change all that.

“As an old township with aged apartments and commercial buildings, Bukit Bintang has plenty of side lanes and alleyways that act as service corridors between the buildings.

“These are often abandoned and become breeding grounds for crime activities,” Mahadi said.

The transformation project was first initiated in 2015 and 20 areas in downtown Kuala Lumpur were identified, namely within Bukit Bintang, Jalan Alor and the Tun Razak Exchange (TRX).

Jalan Alor’s surroundings was identified for potential regeneration and work is currently under way there. A man painting the steps in one of the city’s backlanes.

This comprises side lanes, back lanes, alleys and service lanes in between buildings, as well as pocket parks within Bukit Bintang.

The work will be carried out in two phases, where the first involves repainting old buildings with colourful murals, re-tiling and repaving walkways, upgrading drainage and piping as well as relocating light poles and cables within Jalan Alor covering about 3km at a cost of RM1mil.

The lost stream of Jalan Alor

Changes can be seen along Jalan Alor where some spots have undergone major transformation.

One of the side lanes has been painted to look like a meandering stream with 3D effects complete with a waterfall.

A replica of the Spanish Steps is included to give the waterfall a 3D effect, so people will feel like they are walking over a stream. 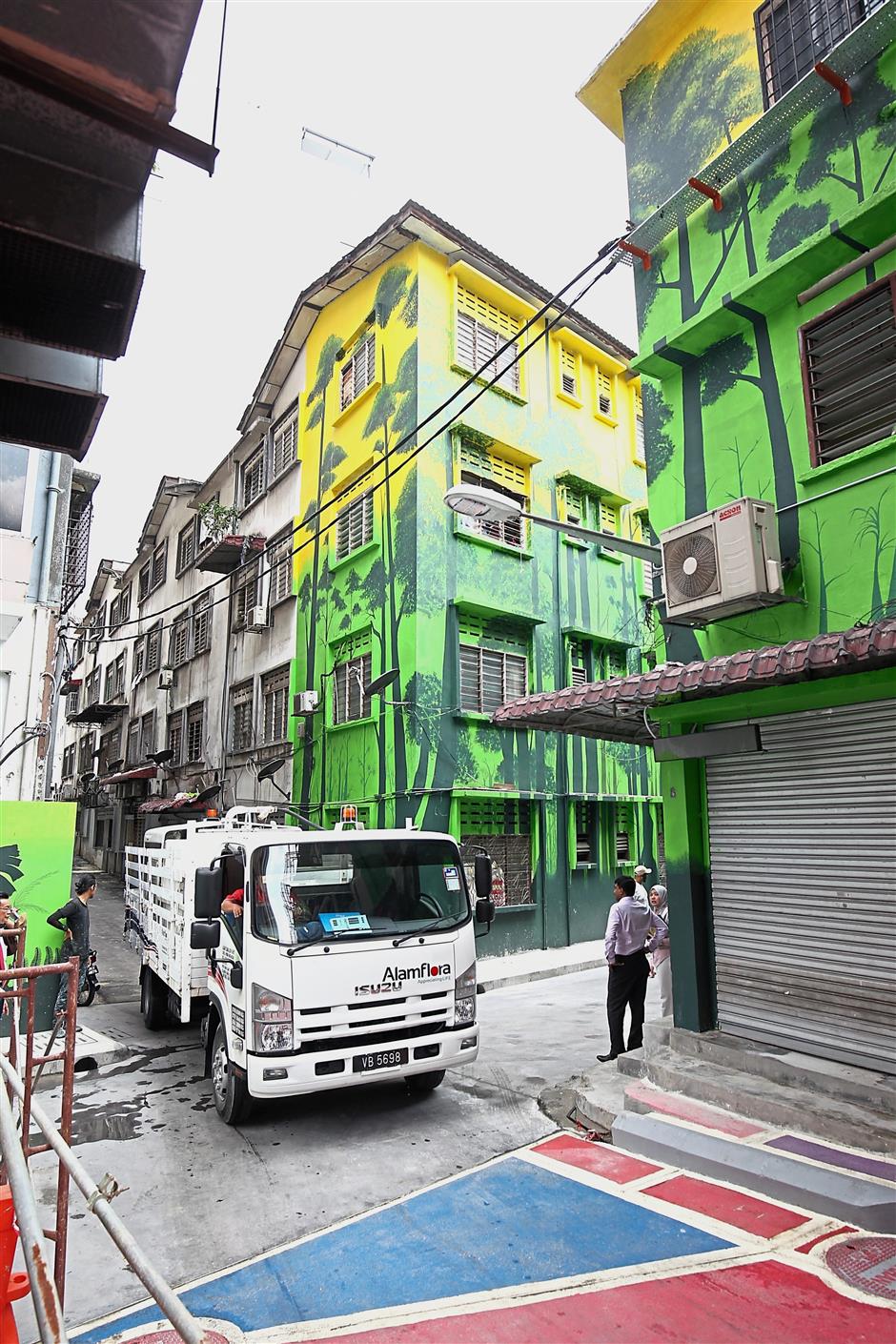 Part of the back lanes where work is currently in progress.

The walls of old buildings have a vibrant coat of paint and local street artists have incorporated flora and fauna including butterflies for a refreshing perspective that can only be described as extraordinary.

This art work was inspired by the Alor stream that used to be here almost 100 years ago, said DBKL project architect Natasha Azim Hussin.

“When researching the history of Jalan Alor, we found an old map dating 1921 showing a stream with trees and vegetation that was here before the buildings came up,’’ Natasha said.

She elaborated that eventually the trees and stream had to make way for development.

“So we thought what better way to remind people of the olden days than recreating a part of history,’’ she said.

Challenges faced with the community

It was not easy for DBKL to carry out the project as it had to convince the people of the changes they were making.

“They were against us at first as many did not understand the benefit of the project.

“For example, while our street artists were in the midst of painting, some people purposely came and destroyed the art work. “Some even vandalised plant boxes used as barricades,” said Mahadi.

He recounted a similar project in Santiago, Chile, where the municipal council took five years to convince the people of the economic benefits that alleys and side lanes had on the social landscape and that their regeneration efforts were hampered by a few.

“We are confident that the entire cityscape will change and business in the area will improve in terms of revenue once the project is completed,” he added.