Hearing-impaired duo a credit to company

Ahmad (left) is a spray paint expert who has served the company for 38 years. With him is Shaaran.

CYCLE & Carriage Bintang Bhd in Batu Caves may have the best spray paint specialists in the country who just happen to be deaf-mute.

Both Ahmad Hamzah, 57, and Ravi Chandran Balakrishnan, 52, have served the company for 38 and 34 years respectively.

Cycle & Carriage was Ahmad’s first employer and he has managed to raise five children while working in the company.

“All my children are able-bodied and two are university graduates.

“I was glad to be employed as initially it was hard for me to secure a job due to my disability,” said Ahmad, who is from Tampin, Negri Sembilan.

Ravi too found it hard to get a job because of his deafness. He was even cheated of his salary before being employed by Cycle & Carriage.

“I am happy working here as I have friends,” said Ravi, who managed to return to work after suffering a stroke several years back. 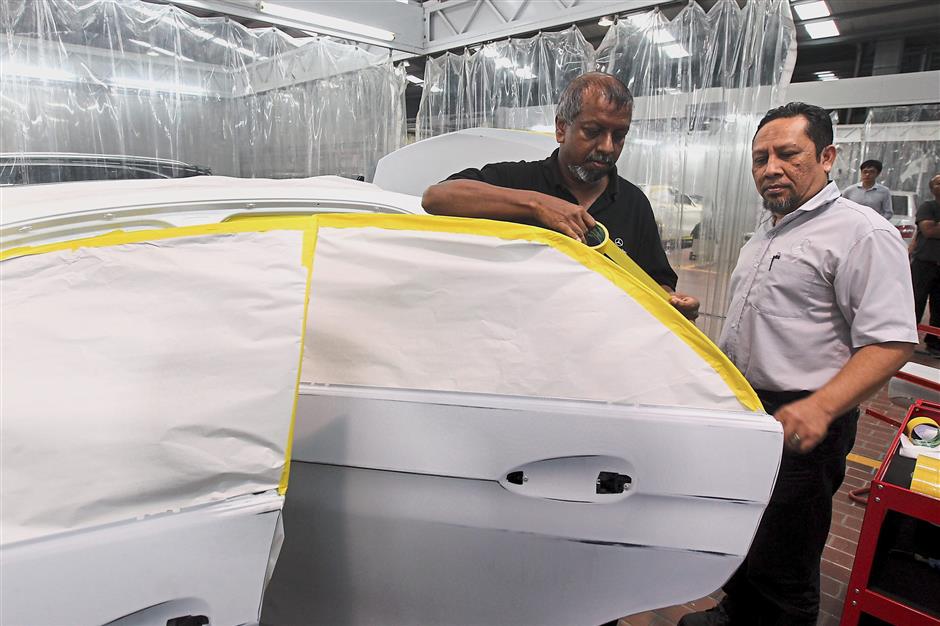 The bachelor lives with his brother and travels to work by public transport.

Several of their co-workers and superiors at the Mercedes-Benz authorised dealership have learned basic sign language so they can communicate with them better.

Manager Sharan Hussein said the duo are among the company’s most hardworking and exemplary employees.

For their safety, Cycle & Carriage ensures, both are never left alone.

“Unlike their able-bodied counterparts, Ahmad and Ravi are more focused in their work probably because they do not get easily distracted.

“Just like other employees, they are given a typed job description and are considered experts in their field who produce among the best work here,” said Sharan, who has also picked up sign language.

He added both Ahmad and Ravi were introduced to the organisation through a deaf friend of theirs who has since retired.