THE Ipoh City Council will soon be launching a trial for the joint collection of domestic waste, garden refuse and bulk waste such as old furniture in the Lahat and Bukit Merah constituencies.

Mayor Datuk Zamri Man said the council hopes to launch the trial before the year ends after discussing the matter with City Councillor Ong Chee Keng.

“Once a date is set, we will send lorries out to collect old furniture and garden refuse together with the usual rubbish truck rounds once a month.

“We hope to test the feasibility of this effort before we finalise any decision about the issue of uncollected garden refuse and bulk waste,” he told a press conference after chairing the council’s monthly full board meeting last Monday. A file image of a rubbish dump at the Tambun market. City councillors are calling for market traders to do more to help the council deal with refuse from markets.

However, Zamri noted that members of the public, such as farmers, who produce a large amounts of garden refuse will have to pay for the contractor’s services on their own.

“This is because we found that they could be producing more than one tonne worth of garden refuse per house or farm.

“Although the trash is not heavy, one tonne of garden refuse would take at least two of our lorries to load it all.

“If we need more lorries from the contractors, it is only fair that they pay the additional costs on their own,” he said.

Asked about residents who only need to dispose of one or two kilos of garden refuse, Zamri said that is acceptable.

“Our lorries have no problem collecting this together with domestic waste and old furniture,” he said.

Asked how long the trial period would run, Zamri did not provide a fixed time frame. 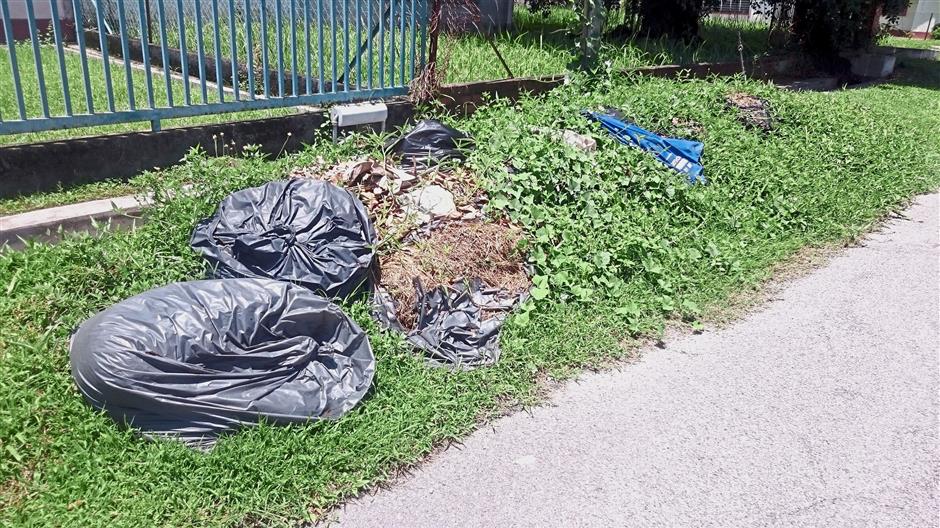 Bags of garden refuse left uncollected for so long that they have become hidden by overgrown grass along Selasar Chateau in Chateau Garden, Ipoh.

Zamri said this in answering a question from City Councillor Aldrich Low, who asked the council to clarify the procedures for collection of bulk waste from residential areas.

Low had said earlier during the meeting that the matter needed to be settled as soon as possible because the uncollected rubbish would contribute to more dengue cases in the Bercham and Tasek constituencies.

Speaking on another matter, Zamri said the council will soon hold a briefing with all organisers of morning and night markets in the city to ensure better waste management.

“We are looking to make it compulsory for the organisers and traders to provide a large plastic bag for waste collection at every stall.

“We believe this will help in reducing the amount of trash left behind after the traders have left the markets,” he said.

Zamri also noted that despite the city council’s repeated efforts to clean up the city, there are still certain groups of people who choose to dirty public places. “We have held many engagement sessions with market organisers and traders before this, but at the end of the day, it is this negative attitude shown by some marketgoers that jeopardise our city’s cleanliness.

“We will be multiplying efforts by sending out more officers to patrol the markets, so that they can reprimand or issue fines to people who throw away rubbish indiscriminately,” he said.

Zamri was elaborating on City Councillor Chan Soon Yip’s proposal to make it compulsory for morning and night market traders to provide at least one rubbish bag at every stall to make it easier for both traders and marketgoers to get rid of their rubbish.

Chan had said during the meeting that doing so would make rubbish collection efforts easier after markets close.

He also said that it was a waste of manpower to have council workers clean up the loads of rubbish left behind, as they could be working in other places that need their immediate attention.