lacey in his 1967 triumph tr4a classic car at his house compound in Jalan Seri tanjung Pinang in tanjung tokong, Penang.

NEVER mind the latest or newest. For classic car enthusiast David Lacey, famed cars from long ago are still the rave.

Having amassed a collection of classic cars over the years, the 52-year-old resident from England now keeps nine of them at his home in Jalan Seri Tanjung Pinang.

Lacey, who is Osram’s director of research and innovation, said it took him 30 years to buy all nine.

“Each one of them is a car I like for its style and reputation, and I especially like cars of the late 1960s to early 1970s. Lacey cleaning one of the cars in his treasured collection, a 2003 Lotus Elise. — Photos: ZHAFARAN NASIB/The Star

“But due to the period from when the cars were made, it is hard to find certain spare parts now.

“Sometimes, when I buy a car model, I have to search tirelessly for spare parts and get them shipped in from other parts of the world,” he said.

Due to his enthusiasm for classic cars, he has learned how to repair them himself, as sending classic cars to the workshop would rake in a huge bill.

“I learnt about repairing cars back when I got my first car in the UK. I made myself read the repair manuals to do it myself.

“That was 30 years ago, when there was no Google and such knowledge can only be learned from manuals or from someone in the industry.

“Today, you can readily get information from the Internet, which eases a lot of things like searching for spare parts and repairs specific to a model,” he said.

To fully restore a classic car, he would need five years as the work involves dismantling parts and components of the car. The interior of one of the classic cars.

“For the car to be safely driven on the road, I need to repair it first as many of them had already broken down before I bought them from the previous owners.

“To me, the process is enjoyable as I am fond of them.

“Each of these cars has its own distinctive features and components which make them special, and I enjoy learning about the mechanics,” he said.

Even though he could carry out repairs on his own, he still faces problems maintaining them as they need to be driven regularly to be kept in good shape.

“All cars are the same. You need to drive them and keep them active. Otherwise, the engine goes.

“Since I have nine to exercise, I lend them to my friends here. Right now, both my Alfa Romeos are on loan to friends.

“This helps me ensure their maintenance, and I don’t mind lending them to people I know,” he said. 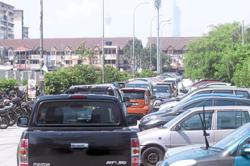