Mohamad and Chief Secretary to the Government Tan Sri Ali Hamsa looking at a model of the 1Malaysia Civil Servants Housing Project in Bandar Seri Sendayan.

The simple phrase has now become a slogan for Negri Sembilan Barisan Nasional candidates who have hit the campaign trail with vigour and enthusiasm.

Mooted by three-term Mentri Besar Datuk Seri Mohamad Hasan when launching the state Barisan manifesto on April 21, the tagline is to send a message to the rakyat and critics on the pledges delivered by his administration since 2013.

“We have decided to give hard proof to the rakyat that Barisan does not make empty promises. Once we make a pledge, we will deliver,” he said.

The fulfilled pledges have been detailed in a 68-page booklet titled Status Pencapaian Aku Janji Kerajaan Negri Sembilan 2013-2017 and are also available on the state’s portal www.bnns2rakyat.com. 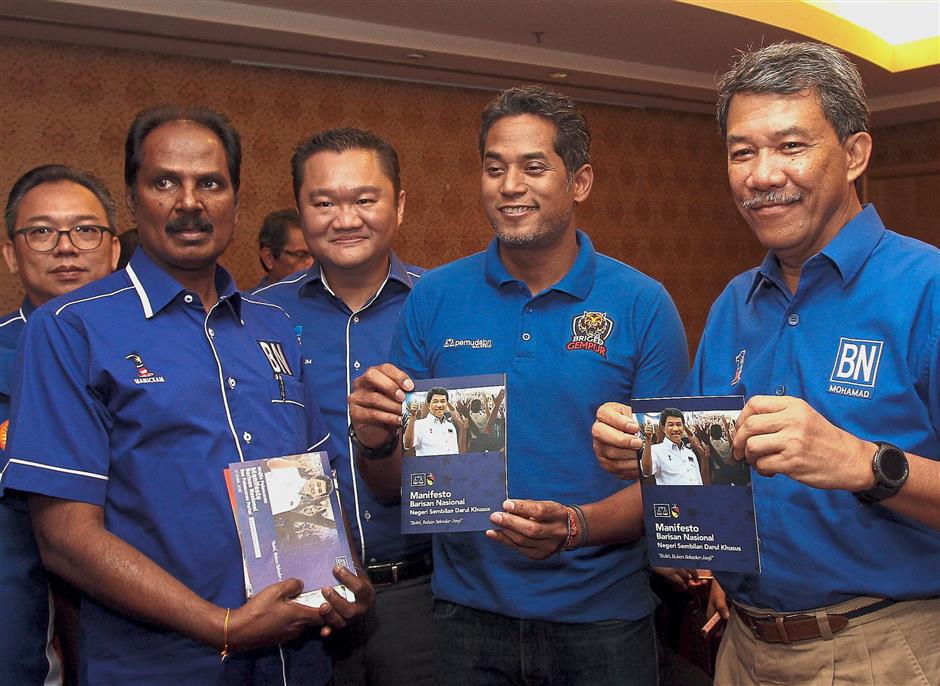 Mohamad said of the 45 pledges, all but one had been carried out — the construction of an Islamic Library and Gallery at the former Syariah Court Complex.

“It is not that we could not fulfil this but we decided to postpone it as there was no urgent need for it.

“But rest assured, the Barisan government will definitely carry out the project in phases,” he said.

Soon after getting the mandate in 2013, Mohamad’s administration continued with its Social Safety Network policy aimed at providing monthly aid to the poor.

Instead of expecting them to apply for financial aid from relevant government agencies, Mohamad’s team sought them out and ensured they received aid.

Over a five-year period, an average of 34,500 individuals received aid every month from agencies such as Baitulmal and the state Welfare Department.

Another pledge by Mohamad’s team was to build more affordable homes.

This, he said, was necessary as property prices had spiked due to rapid development and an increase in the number of people relocating to the state.

With prices in some areas increasing three-fold, the state decided to work on a new housing policy.

While the Federal housing policy compels developers to ensure 30% of houses in their development comprised low-cost units, Mohamad’s administration told developers that half the number of houses in each of their respective projects should cost between RM80,000 and RM400,000.

Approval has since been given for the construction of 10,888 low-cost houses statewide.

To ensure more people could afford such homes, Mohamad’s administration lent its support to the 1Malaysia People’s Housing (PR1MA) units in the state.

Approval has also been given for the construction of another 8,421 units.

The state government also took the initiative to help second-generation Felda settlers to own homes by providing land.

A total of 1,144 houses are being built in six Felda schemes in Negri and are due for completion anytime.

Another 40 houses are being built in Jempol and Kuala Pilah while approval has been given for another 4,006 units in Nilai, Senawang, Linggi and Rembau.

Mohamad’s administration has also laid down plans to build more such homes for civil servants.

Twelve such schemes involving 6,417 houses will be built in Negri Sembilan.

“I have also asked my district officers to let me know if we still have state-owned land in their respective areas.

“If we do, we will build more of such homes to appreciate the services of our civil servants,” he said, adding that a project to build 360 units near the Sendayan Air Base had already began.

The state also facilitated the construction of 100 Rumah Awam Harga Rendah in Ladang Tanah Merah, Port Dickson, and another 100 units in Rantau.

These houses are to be sold to former estate workers.

To ensure Negri folk have better access to healthcare services, the state spent RM1.9bil through the Health Ministry to provide treatment at government health facilities statewide, build hospitals and clinics as well as on medicines and equipment.

The pledge to build a modern hospital in Rembau costing RM97mil was fulfilled and the project is due for completion in June.

Locals no longer need to travel to bigger towns to seek treatment as four government clinics have opened in Sikamat, Nilai, Palong and Lenggeng.

Dialysis patients were not left out as seven centres equipped with 142 machines were opened statewide.

To improve road safety, 59 upgrading projects at a cost of RM239mil were carried out while another RM670mil was spent on 3,009 projects to maintain state and federal routes.

The state also facilitated the construction of a new exit to Seremban near Temiang along the Kajang Seremban Expressway (Lekas) and a new toll plaza for access to the North South Expressway (NSE) from Seremban.

The Lekas exit was recently opened while the NSE toll plaza is due to be ready at the end of this month.

The Mahsan-Rompin bypass, also known as the Bahau bypass, took 18 months to complete at a cost of RM25mil.

“With the new bypass, motorists need not enter Bahau and this has helped reduce traffic in town,” he said.

As part of his government policy to brighten up the state at night, 5,674 streetlights were installed in traditional Malay villages, residential areas, back alleys, trunk roads and other secluded areas.

For better internet access, the free WiFi 1NS Wireless City project was expanded to more areas. From 2011 to 2016, a total of 111,247 people had registered for the service.

People in 12 villages were also given free WiFi access under the NS WiFi Desa Cemerlang programme.

In terms of education, the state imposed a nominal fee in quit rent for 118 vernacular and government-assisted schools to help reduce their operating cost.

Earlier this year, Mohamad’s administration gave the SJK(C) Ulu Kanchong board of governors an “early ang pow” by waiving a RM906,000 premium for the land where the school was to be relocated.

The school was only charged RM1,000 to change the land’s status from agriculture to school-use.

Mohamad’s administration successfully completed the merger of the Seremban and Nilai municipal councils into a single entity, paving the way for Seremban to attain city status.

Although the Federal Govern-ment had approved the status for Seremban in 2011, Mohamad said his administration wanted to improve public transport, amenities and infrastructure before making it official.

Countless manhours were put into improving basic services such as rubbish collection, to ensure Seremban had the characteristics of a city.

Efforts were also made to increase parking in town to cater to new residential and commercial areas in Seremban.

At the last count, Seremban had 69,121 lots but Mohamad’s administration still plans to have more by encouraging land owners to convert their vacant plots into carparks.

A soft launch was held on April 20 this year to declare Seremban a city but Mohamad said an official ceremony will be held in January in conjunction with the birthday celebration of state ruler Tuanku Muhriz Tuanku Munawir.

Following a rapid increase in population in Bahau and its surrounding areas, the state government upgraded the Jempol District Council to a municipality.

Negri folk were given another reason to cheer when the state’s first Urban Transformation Centre (UTC) was opened in Ampangan near Seremban last November.

The UTC, which houses several government departments and agencies, is popular and convenient as it opens till late into the evenings and on weekends.

Mohamad said to give people better access to government services, the state planned to open a UTC in Nilai and a Rural Transformation Centre (RTC) in Bandar Baru Serting.

The state’s first RTC was opened in Rembau in 2016 and served people from as far as Melaka.