Going back to basics in Pulau Ketam

Clusters of houses on wooden and cement stilts is a natural sight all around Pulau Ketam. Getting from one place to another requires a RM1 boat ride.

JUST across the Sungai Kelang, via a 20-minute speedboat ride from the Port Klang jetty, sits a cluster of floating houses perched on wooden stilts.

As quaint and picturesque as it may be, we were soon greeted by whiffs of salty sea air plus a mild stench of sewerage emanating from beneath the murky waters.

To be honest, this place, named Pulau Ketam (Crab Island), which was founded more than 130 years ago, is not among local tourists' favoured spots for a weekend getaway, except for those seeking fresh seafood meals.

Even foreign tourists are unlikely to plan a stop here.

The ferry terminal at Port Klang where passengers can take either the speedboat or ferry to Pulau Ketam. This terminal is right beside the Pelabuhan Klang KTM station.

But for those who only wish for a simple and quiet weekend away from the hustle and bustle of the concrete jungle, then Pulau Ketam could slowly grow on you.

For us, it was a brand new adventure waiting to happen as we had never really experienced village life or even lived in wooden stilt homes.

Believe me when I say simple because there is little to no modern amenities found around the village.

Do not even bother looking for the flush after doing the number one or two in the toilet, as it drops straight into the waters below.

For a more unique experience, we decided to try out one of the homestays which offered by quite a number of villagers there.

Firstly, it was not easy locating a homestay because villagers there do not advertise their services.

The speedboat from Port Klang to Pulau Ketam took only 20 minutes. Passengers need not buy tickets, just get onto the boat and pay the conductor once the boat speeds off. There is no fixed timing for the boat and it will only depart once the boat is full.

Most do nor have social media like Facebook that we take for granted, making friends’ recommendations or word-of-mouth the only means of advertising for them.

We ended up choosing a homestay located at the “end of the river”, as the locals call it. The home is a five-minute boat ride from Pulau Ketam’s main terminal.

Travelling to and from the main town can either be a RM1 boat ride or a 15-minute walk through narrow paths and colourful wooden houses on stilts.

There is another option, which is to rent a bicycle or electric bikes to explore the whole village.

As the majority of the villagers are Hokkien, Teochew and Hainanese, communication becomes a major factor, especially for non-Hokkien or Mandarin-speaking visitors.

According to the homestay owner, almost all villagers there are friendly and will offer help if they can.

Walk along the narrow roads between houses and you will find fish laid out to dry.

It is through asking around that we found out about a boat tour that takes visitors around the island to catch the sunset, watch eagle feeding sessions and also visit the neighbouring Kampung Bagan Sungai Lima New Village.

The boat ride, which took about three hours, came complete with a local tour guide who gave visitors a brief history of the island and the activities around there.

This also included the owner of the boat throwing chicken guts into the sea to lure eagles that were seen flying in circles above the boat.

It was an amazing sight to see numerous eagles in the wild, right above our heads.

Overall, it was an interesting ride, if not for the slight rain that started just as we were on our way to watch the sunset.

When asked how interested visitors could look them up online or book a tour, the answer was just to ask around the village and someone would point them in the right direction.

These houses on stilts are just across the Sungai Kelang and a 20-minute speedboat ride from the Port Klang jetty.

Even taking a boat to one of the many fish farms around the island would require asking around the village or recommendations as not many owners want to sell their fish to strangers due to its decreasing quantity.

Seeing as how more than 80% of the villagers are fishermen and the other 20% hawkers or restaurant owners, it is not surprising that not much activity goes on here.

It is also no surprise that the once-flourishing population in the 1980s has now dropped dramatically due to the lack of development.

The only ones remaining in the village are the elderly and young children who might also leave the nest and settle in the city to further their studies and career.

Even with the dwindling population, being there felt like a reunion during the festive Chinese New Year season.

Visitors can rent bicycles or motorised bikes to get around the island more efficiently. One can also opt to walk around the small town.

With the doors to most homes open wide and Chinese music blaring from some houses, villagers greet each other as they pass and even just stroll into neighbours’ houses for a chat or for tea.

This is a sight that certainly cannot be seen in neighbourhoods around the city, thanks to the increasing crime rate around town.

For those interested in a quick weekend escape, the earliest ferry departs from the South Port passenger terminal in Port Klang as early as 8.45am with the last at 6pm or sometimes even 7pm.

There are two choices to get to the village, which is either the speedboat ride, which is faster, as compared to the air-conditioned ferry. 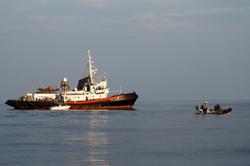