The park’s landmark is visible as boats exit the river and head into the Andaman Sea.

THERE is something alluring about being by the beach in the north-west of Malaysia facing the Andaman Sea.

This is the charm of Langkawi, the Jewel of Kedah, which is famously known to tourists as a duty-free island with expansiveand unspoilt sandy beaches, pristine and crystal clear waters as well as some breathtaking views.

Langkawi is indeed a gem in the north of Malaysia as in this slice of paradise are three main conservation areas with World Geopark status by Unesco as proudly listed in the Langkawi Development Authority (Lada) website – www.lada.gov.my

These are Machincang Geoforest Park – estimated to be between 450mil to 550mil years old – with the oldest known rock formations in the region; the limestone attractions and mangrove forests at Kilim Karst Geoforest Park and Dayang Bunting Geoforest Park’s picturesque freshwater lake.

Being the only South-East Asian destination with Unesco’s highly-coveted geopark status gives Lada the edge to promote Langkawi’s eco-tourism attractions.

Having read on what Langkawi has to offer, a trip to its mangrove forests at Kilim Karst Geoforest Park seemed like the best way to discover its unique geological features.

The narrow mice channel only allows one boat to pass through at a time.

The adventurous can hop on a boat at either the Tanjung Rhu jetty or Kilim jetty or alternatively, find a local tour operator to discover the mangroves.

I opted for a guide to walk me through my eco-mangrove safari adventure during a four-hour journey into the swamp land.

Mark Hisham from Naam Sdn Bhd in Tanjung Rhu, Langkawi, had bad news the day we met one bright and sunny Sunday morning.

“The sea is very choppy so we cannot attempt parasailing and as for the mangrove safari tour, we cannot go into the Andaman Sea and will have to use another route,” said Mark to his crestfallen customers.

Instead of sulking about what we could not do that weekend, my friend and I jumped at the opportunity to accomplish what we could during our short holiday in Langkawi.

If it was not as windy and the seas a little calmer, we would have gotten into the fancy looking Sea Vulture boat from the Paku Pakis Hub at Tanjung Rhu Beach.

The Gua Kelawar is one of the main attractions for those visiting the Kilim Karst Geoforest Park.

As this was not the case, the Naam transport dropped us at the Tanjung Rhu jetty where we waited for our ride.

The jetty was abuzz with many foreign and local tourists finding their way around, to get a ride on the motorboat, to the mangroves.

Some were with guides, others came in groups of family or friends. There was even the lone tourist out on a solo adventure to capture the beauty of the mangroves.

There are many motorboats for hire but the option of having fewer people in the Sea Vulture and Naam’s emphasis on sustainable-tourism appealed to me more.

“The Gorilla or King Kong Mountain is located on the east of Langkawi and it is the highest peak on this side of the island,” said Mark before the skipper revved up the engine and headed to a spot for eagle watching.

The passengers in our boat snapped photos and observed as those in the smaller boats had eagles swooping in for a feed of whatever they were throwing out to the birds.

Mark said Naam does not encourage the feeding of wild animals because it was important to preserve the eco-system for future generations.

“We do not want the animals to be dependant on humans. They must be able to survive on their own,” said Mark.

There are two types of eagles here – the white bellied sea eagle and the Brahminy kite.

It was the same story when we headed down the waterways to an area where monkeys came out to play.

Naturally, the monkeys went towards the blue boats with passengers throwing bananas and fruit to woo the primates. Once again, we watched in dismay from afar.

The busy jetty at Tanjung Rhu where visitors await their rides to the geoforest park.

We journeyed on to the mice channel, named such because only one boat can pass through at a time, and made our way to the bat cave.

Before reaching our destination, we observed the meeting point of the Tanjung Rhu river and Kilim river and also passed an area known as the Hole in the Wall where there are several fish farms and floating restaurants.

The bat cave or Gua Kelawar is located on the Kilim river, near the Kilim jetty, and you disembark here for a walk into the cave.

It is home to hundreds of bats that are not bothered by torch lights being flashed at them as they seem to have gotten used to prying tourists.

While the focus should have been on the bats, the beautiful stalactites hanging from above, the rock-sturdy stalagmites as well as the magnificent limestone formations got our attention instead.

“The karst limestone formations here are more than 200 million years old,” said Mark with much pride.

After this informative pit-stop, we were back aboard the Sea Vulture and headed to the fish farm for a brief stop before journeying on to Crocodile Cave.

Entering the Crocodile Cave is a calculated move as the Sea Vulture can only enter this narrow channel when the tide is low. Luckily for us, the boat made it through.

After this, the skipper headed out to the river mouth leading to the Andaman Sea to show us the Kilim Geoforest Park landmark as well as a strange-looking island called Pulau Kasut.

If the sea had not been rough, we would have had the chance to drop by the secluded long beach for a spot of swimming but it was not our day.

With hunger pangs kicking in, we headed back to the Tanjung Rhu jetty and made plans to have laksa sekok in Pantai Cenang. 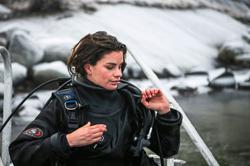