A roof to lure them in

Great solution: India Street pedestrian mall will get a new roof installed over the buildings for maximum convenience and comfort.

REVIVING a once vibrant street in the 90s is not an easy job with the rising number of mega malls and supermarket offering more alternatives and comfort to visitors. Fortunately the committee of India Street pedestrian mall came up with a simple but brilliant solution to restore the glory of the historical buildings – a roof.

Proposed in 2010 during the annual general meeting, the project was approved not long ago and works are now in progress to install a cool looking modern roof which gives shoppers the convenience and comfort of shopping on the streets no matter rain or shine. The million-ringgit project is expected to be completed two weeks before Hari Raya this year.

In 1992, the street had been converted into a pedestrian mall in order to cater to the demand of customers. Despite the efforts, the number of customers shopping in the area has declined after the building of Plaza Merdeka was in progress in 2012.

India Street pedestrian mall committee chairman Datuk Wee Hong Seng said the first thing to do was to get back the customers to India Street in order to maintain business revenue before making further changes. He believes to do the right thing, the timing has to be right and the roof couldn’t have come at a better time than now.

With the idea put forward, it was a lengthy process to get feedback from the public on the idea of going through the transformation.

“I think if we can manage to get the people to participate, listen to them on how they look at the overall proposal and how they like the things to be carried out, it’ll be a good starting point,” said Wee.

He considered themselves fortunate to be able to get the support of 70% to 80% of community in India Street to agree on the roof.

The Chief Minister was keen and supportive towards the idea as well. Wee said this was the first community-requested programme by the people who wanted some transformation. They are very happy that the state government shared the same.

The rainforest-themed roof designed by architects from Nurina Matnor comprises of nature-coloured glass panels with retractable and sliding roof for ventilation or light. Upon completion, the street would be a sight to behold at night due to spotlights lighting up the roof from below. 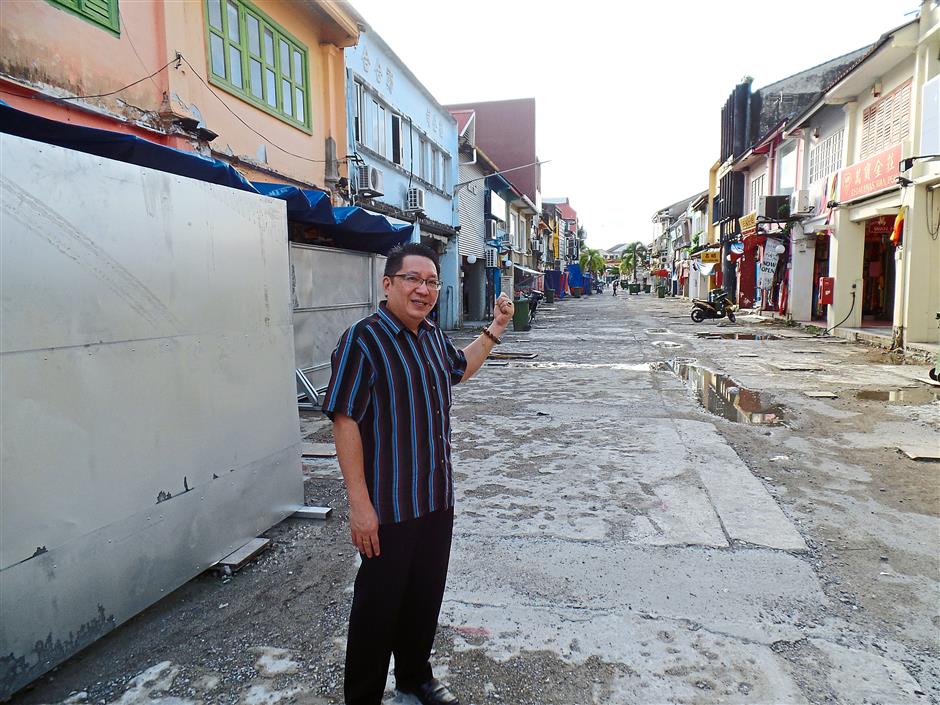 This is it: Wee showing the construction site in the India Street pedestrian pall.

The design has incorporated ideas given by shop owners and tenants in the street to give them a sense of belonging and contribution to the future success of the roof.

“With the rapid development happening around the city, if we are not going to get ourselves ready for all the changes, we’ll be left behind,” Wee told Sarawak Metro at his shop Fabriko.

Wee expressed his wish to cut down the construction time so that it would not affect the overall running of his business. The piling works have started since last week after getting the go-ahead from Sesco, Kuching water board and fire brigade.

When queried on his concern if the mall next to India Street affected the business, Wee said he thought it was a very negative thought because the mall could actually benefit them in terms of attracting tourists or visitors and provide ample parking space. Wee stated both parties could complement each other with Plaza Merderka selling higher-end products and India Street selling medium to low-end products.

Wee plans to promote India Street with its new look to tourism boards and hotels. Along with Plaza Merdeka and the nearby malls, they have the potential to be the largest shopping paradise in Kuching.

“You have to pull strength from everybody and benefit from there together, I think it is possible to achieve. We need a more attractive ambience and area where you have everything. That is how I look at the future of this area,” said Wee.

In terms of heritage, the roof will not affect the structure or the heritage value but instead brings out the true beauty of it with the removal of old and unused aircond, signboards and awnings.

In the future, India Street might have two shifts of business to create something to attract the people to visit. More street arts are to be added on the walls to give visitors the full experience of shopping, cultural tour and art escapade. Local artists are encouraged to apply with the council to draw and unleash their burst of creativity on a wall they call their canvas.

A management team will be set up for the purpose of maintaining the area and talks are in order for a 24-hour security for the safety of visitors at night.

The roof will be a breakthrough for the future of India Street.