Paying tribute to our fallen heroes

Home of our armed forces: Lt Col Bakhtiar at ﻿the entrance to Desa Tun Hussein Onn in Setiawangsa.

Desa Tun Hussein Onn is more than just a residential quarters for the Malaysian armed forces.

While the sprawling area was named after the third Prime Minister, roads there paid tribute to the heroes who sacrificed their lives for the country during the Communist Insurgency.

Also known as the Second Malayan Emergency, the insurgency erupted in 1968 when the Malayan Communist Party (MCP) ambushed security forces in Kroh–Betong.

It was a strike-back following the Malayan Emergency that ended in 1960, after members of the Malayan Communist Party were regrouped and retrained at the Malaysian-Thailand border.

The Rukun Tetangga (neighbourhood watch) and Rela Corps (People’s Volunteer Group) were developed by the Government during this period to curb Communist influence.

Following the establishment of a bilateral relationship with China in 1974 and the collapse of the Eastern Bloc Communist regimes, the MCP realised that they could not form a Communist government in Malaysia and finally signed a Peace Accord in Haadyai, Thailand, in 1989. 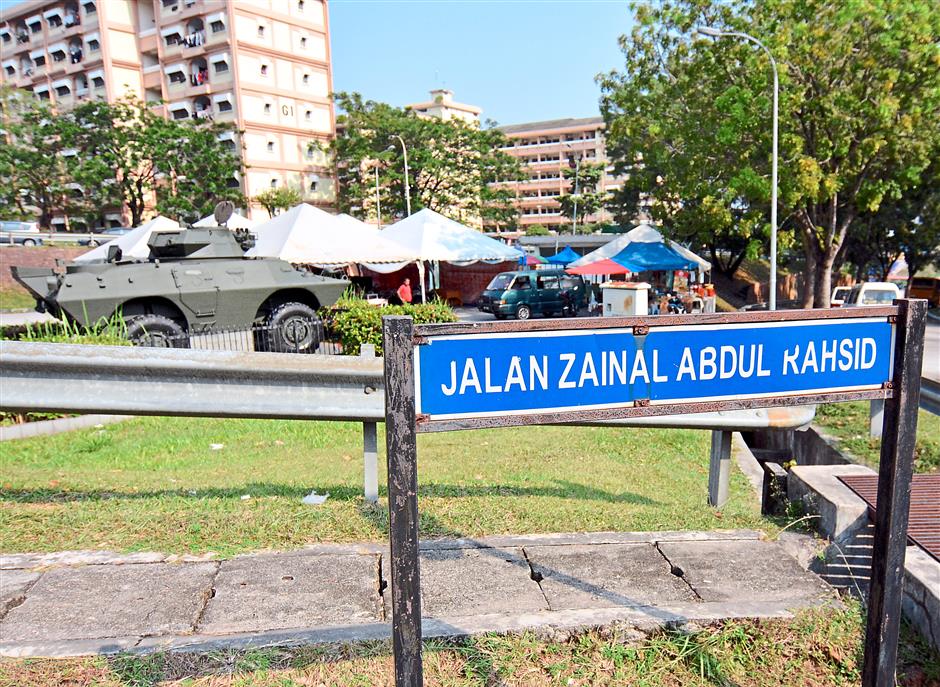 Lined with quarters: One of the many roads in Desa Tun Hussein Onn which are named after fallen soldiers.

With that, the MCP agreed to disband their armed units and destroy all of their weapons.

They also “pledged their loyalty” to the Yang diPertuan Agong. That was the end of the insurgency.

At the entrance to Desa Tun Hussein Onn, which is located in Setiawangsa, is an imposing gate watched by officers.

With the periphery reinforced and access restricted, not many realise that the township is situated right behind the Defence Ministry’s headquarters in Jalan Semarak.

Interestingly, nestled behind rows of trees in this military quarter are the graves of Chinese tycoon Loke Yew, his wife and two children.

The residential area is complete with secondary and primary schools, as well as other facilities including market, clinic, kindergarten, religious school and community rehabilitation centre to take care of the well-being of the armed forces’ members and their families.

“This is one of the domestic areas for the military, including the navy and air force, but the majority of them are from the army,” said Malaysian Armed Forces’ head of public affairs, Lt Col Bakhtiar Nor Md Alias.

Married officers are eligible for units at the 20-year-old township, which has a ferry service and the bus shelters are interestingly, in the design of military headgear.

Lt Col Bakhtiar also provided information about the heroes who fought against the Communists.

All of them were bestowed the Seri Pahlawan Gagah Perkasa (SP) honour, for displaying supreme courage and bravery in life-risking situations.

Lt M Abdul Razak Hussain hailed from Kampung Tawang, Bachok, Kelantan. On Nov 1, 1970, acting on a tip-off, Lt M Abdul Razak who headed the Tiger Platoon 8 RAMD was ordered to find and kill the enemies. The patrolling team he led was under attack when they were approaching a small hill. Soon, they were surrounded and bullets rained on the team. In a heroic attempt to save his comrades who were exposed to the incessant firing, he stood up and shot at the enemies. He lost his life in the battle and was awarded the SP title on Nov 2, 1971.

PW II Lenggu ak Cina was from Sungai Baloh, Ngemah, Kanowit, Sarawak. His team was ambushed at Tanjung Batu Babi when carrying out an operation along Sungai Katibas on Jan 20, 1971. He managed to get near the riverbank and discover the enemies’ hideout, his team killed four communist members. Unfortunately, seven people in his team lost their lives while two others were injured. He was awarded the SP title on June 2, 1971.

Kapt Mohana Chandran Velayuthan was from Seremban, Negri Sembilan. He led a 23-strong team to trace the movements of the communists in the Ulu Kinta Forest Reserve and on June 13, 1971, they spotted three communists near a sizable base camp. The two teams opened fire and Kapt Chandran bravely inched closer towards the base camp but was shot in the head by enemies hiding in a hill. He was bestowed the SP title on June 7, 1972

LKpl Saimon Tarikat was from Kampung Parit Rambai Ulu, Pontian, Johor. On Jan 25, 1983, 12 members from the Special Intelligence Forces were on a special mission at Kampung Titi. The group was divided into three teams. In an operation at night, LKpl Saimon and his team member saw two communists descending a hill and they fired several shots right away. A female communist screamed to help her friends escape, LKpl Saimon went after the woman and was shot dead by a male communist who spotted him. Two communists were killed in that operation. He was awarded the SP title on June 1, 1983.

Tpr Rosli Buang hailed from Kampung Buntal Lumut, Kuching, Sarawak. On July 6, 1971, Tpr Rosli and his team were deployed to the Perlop jungle on a special mission to kill the enemies. While on patrol, they were attacked by a group of communists and two of them were wounded. In a brave move, Tpr Rosli shot back while running towards his injured comrades to check on them. A bullet hit his neck and took his life. He was awarded the SP title on July 7, 1972.

Kapt Zainal Abdul Rashid was from Pantai Remis, Perak. On July 15, 1976, he and five other members noticed that 15 communists were tailing them. They killed two of the communists. Kapt Zainal charged towards the enemies while shouting words of encouragement to keep his team’s fighting spirit up. A female communist threw a grenade at them and wounded Kapt Zainal. Moved by the actions of Kapt Zainal, the rest of the team fought hard and killed six of the 15 communists. Kapt Zainal was sacrificed in the battle and he was awarded the SP title on June 1, 1977.