Restaurant founder and co-owner Jackie Yap tried the dish in Hong Kong and loved it so much that she decided to introduce it to customers here.

Private Kitchen chef Lam Fai was pleased to recreate the popular dish from his home country, and added his own touch.

He said the dish had its roots in the Three Kingdoms period.

“It was known as Farmer’s Grilled Fish and was a favourite of renowned strategist Zhuge Liang and the three heroes of the Three Kingdoms period — Liu Bei, Guan Yu and Zhang Fei. 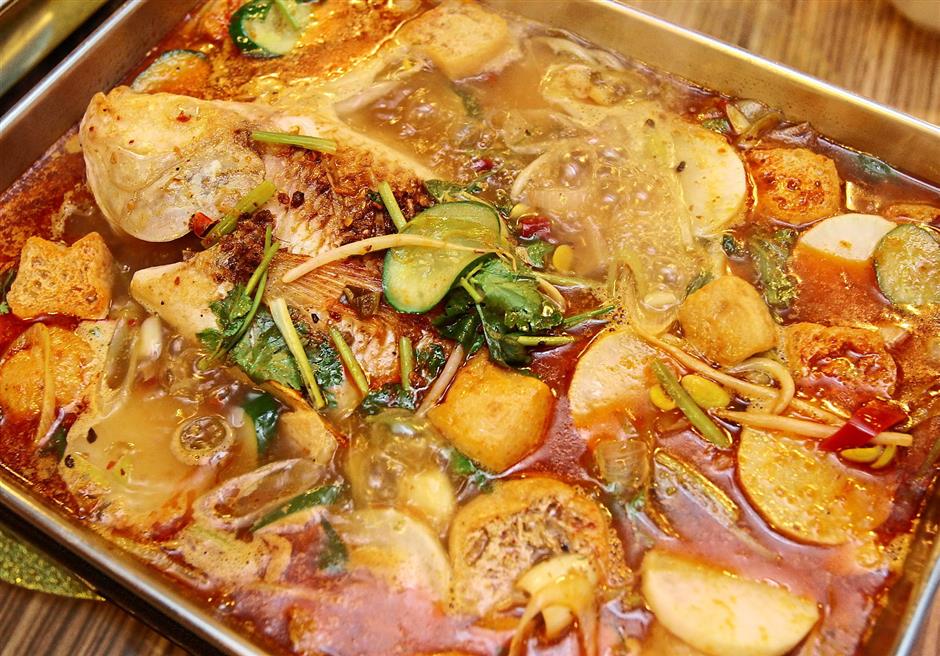 Appetising: For a fiery kick, go for the Fragrant Spicy Soup.

“It is a popular dish in China and recently gained popularity in Hong Kong,” said Lam.

Lam uses fish raised using the Aquaponic system and customers can choose either the Australian Jade Perch or Red Pearl.

“The fish lives in a clean environment and unlike freshwater fish, it has no muddy smell. It also has less bones compared to other types of fish, making it easier to eat.

“The fish is partially grilled before being added into the hot pot and cooked further.

“The soup base, made with herbs and pig bones, do not have MSG,” he said.

For a fiery kick, go for the Fragrant Spicy Soup, which is also the most popular among patrons, Yap revealed.

The chef said the spicy sauce was not added in the soup but served on the side so customers could choose how spicy they would like the dish to be.

If you cannot take the heat like me, you can opt for the Fresh Tomatoes and Sweet Corn Soup. You can choose from a variety of meat, seafood, vegetables, and noodles to add to the steamboat.

The Prosperity Salmon or Jelly Fish Yee Sang (RM88 per portion, RM48 for half portion) and Lap Mei Fun with Preserved Chinese Sausages and Mushrooms (RM98, six to eight diners) are available for dine-in or takeaway.