Chik carrying out laser treatment on a canine patient.

Therefore it is only fair they are given treatment and care when ill instead of euthanising them.

In the past decade, there has also been an increase in pet lovers and owners standing by their pets when the animals become physically challenged.

Outlets offering physiotherapy, acupuncture and even wheels for disabled dogs have sprouted in Malaysia.

One such organisation is Paws Rehab Center, which offers various services such as physiotherapy, aquatherapy and laser treatment, among others, for dogs and cats.

Its founder Sydney Chik has a degree in physiotherapy from Northumbria University, United Kingdom as well as qualifications to become a Certified Canine Rehab Practitioner (CCRP) from the University of Tennessee, United States.

According to Chik, she receives about three to four cases each week.

"Generally my patients are senior dogs with arthritis, disabled dog as well as dogs in need of post-surgery physiotherapy," said Chik, whose center is located in Subang Jaya.

Chik will be at hand to offer physiotherapy assessment at MDDB's adoption drive at The Square, Jaya One, Petaling Jaya today.

According to MDDB's Derene Lee, there will be 10 slots of 15 minutes each from 3.00pm to 5.30pm on a first-come-first-serve basis.

"There is no fixed payment for the service and people can donate any amount to MDDB they want to," said Lee.

Some 20 puppies will also be available for adoption at the event and one of them is an eight-month old pup called Sweet Pea which was rescued by Desa Park City residents. 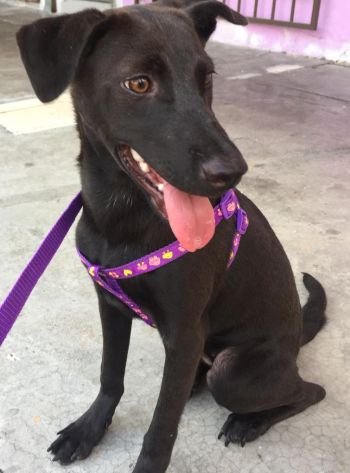 According to Joanne Darby, one of the rescuers, Sweet Pea came from a litter of ten puppies found at an unused site in Desa Park City.

Residents collectively raised funds to neuter and vaccinate the puppies and have rehomed five of Sweet Pea's siblings.

"We wish more people were as compassionate as the Desa Park City residents and would opt to help street and stray dogs instead of poisoning them or getting the local council to catch them to be euthanised," said Lee.

The adoption drive is from noon to 6.00pm.