A hiker deftly crossing the river using the stepping stones.

Gunung Angsi
With two known routes up to its summit at 824m, a Trans Gunung Angsi (A-to-B hike) is possible for hikers to truly experience the diversity and similarity of the two trails in a single outing. The shorter, more direct Bukit Putus route has more open views, including a waterfall/reservoir while Ulu Bendul offers a water/river trail with two river crossings. It also starts 100m lower.

While I did contemplate going up the Ulu Bendul trail (5.5 km) and returning via Bukit Putus (4.4km), I did not fancy the 4km walk along the highway back to the car.

Located 20km from Seremban, the Ulu Bendol Recreational Forest is a popular weekend picnic spot with a proper carpark, changing room and toilet facilities, as well as food stalls. metro@thestar.com.my

Picnickers cooling down in the stream.


THINGS YOU SHOULD KNOW
A hike up Gunung Angsi seemed like the perfect way to round off my beach holiday in Port Dickson. With minimal traffic on the road, we got to the Ulu Bendol Recreational Forest in Kuala Pilah in just under an hour. Visitors are required to check-in at the Ranger Office where a RM5 entry fee per person is collected.

As it was still early, we were able to park close to the trailhead — a clearly marked path just before the bridge, on the left of the river. Though the ground was still damp from a dawn shower, the air was pleasantly cool as we walked alongside a pipeline upstream, accompanied by the soothing sound of trickling water. The undulating terrain eventually brought us to a hut where we turned left, away from the pipeline and river, heading inland.

An hour into the trek, we reached Camp Tangga Batu, an established campsite with a large open space set by the river with the path continuing beyond the river. Not feeling agile, I splashed through 5m of foot-deep water without making any attempt to rock-hop.

Carrying on in sodden shoes, the sandy path led us to the next crossing twenty minutes later. This time I managed to cross without wetting my shoes via the stepping stones.

After a lung-busting 30 minutes, the trail flattened, providing a short but much-needed 10-minute respite. The next challenge was a 6m-tall sand boulder. We clambered up its smooth sides with the help of ropes only to encounter more barren slopes and more scrambling on hands and knees.

Taking a breather after 45 minutes of strenuous uphill climbing that felt three times longer, my hiking buddy shared that he did not recall it being so steep or so long, on his previous Angsi traverse along the Bukit Putus / Ulu Bendul trek. It was to be another 25 minutes of unrelenting incline to the summit.

At 824m, Gunung Angsi’s lack of views is compensated by its huge, garden-like, flat space. As one of the largest I have seen, it was already packed with at least 50 hikers converging from both trails. The average time to reach the top from Bukit Putus is between one-and-a-half to two hours.

We did not linger as the ascent had taken 45 minutes longer than the budgeted two hours.

Going down, we met several groups on their way up, wanting to know how much further it was to the top. After our recent experience, we were able to give a relatively accurate time estimate.

The return journey took two hours and as we approached the trailhead, we could see families picnicking on both sides of the river, having lunch while others enjoyed a refreshing dip in the naturally cold water.
Article type: metered
User Type: anonymous web
User Status:
Campaign ID: 18
Cxense type: free
User access status: 3 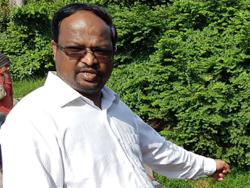 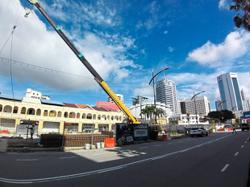