THEY may be unsightly but posters and bunting hung on trees with contact numbers of plumbers and cleaning services can be a life saver.

Even pawnshop stickers on trees and signboards offer a lifeline to cash-strapped citizens.

You may be grateful for those announcing a big sale on cosmetic and fashion brands offering discounts as it gives you a chance to a great bargain, but stopping the vehicle to check the details could contribute to traffic congestion or even accidents.

So fed-up was Kuala Lumpur mayor Datuk Seri Mohd Amin Nordin Abd Aziz with the situation that he blurted out at a press conference two years ago that if it was up to him he would amend the law to include a severe punishment such as caning the culprits.

It is understandable why he felt that way. Kuala Lumpur City Hall’s (DBKL) war on illegal advertisements had been going on for decades, but nothing seemed to work to stop it. It has only been getting worse by the day.

In fact, those ubiquitous banners, bunting, posters and stickers make up a huge industry worth billions of ringgit, and millions of taxpayers’ money is being used to remove them.

“About five million ringgit. That is how much it is costing us to bring down those unsightly banners and bunting each year,’’ said DBKL executive director (socio-economic development) Datuk Ibrahim Yusoff.

“And that’s only the manpower, overtime claims, and the logistics needed for the exercise,’’ he said.

“It is a never-ending battle that has been going on for years.

“Although the problem is lesser now due to increased action, there is little effect,” added Ibrahim.

For the past decade, DBKL had been on a wave of enforcement on illegal banners and bunting.

“We cancelled mobile numbers through the Malaysian Communications and Multimedia Commission (MCMC), and messaged the offenders asking them to take down the banners.

“We even held meetings with the offenders, and those who were brave enough to turn up for our hearing merely pleaded ignorance and innocence claiming that the agents or the promoters hired to put up the banners were at fault,’’ he said.

Ibrahim said for every 100 bunting brought down, 200 would pop up and the top 10 hotspots in the city were almost always lamp posts along highways, main roads leading into townships, malls, and hotels.

These guys were caught red handed by DBKL enforcement team for putting up illegal ads in the city recently.

“Main roads prone to traffic jams at peak hour are always targeted as it has high chance of being noticed by people,’’ he said.

Grabbing the bull by its horn

StarMetro called up several event management companies engaged to put up banners in the city centre.

Everyone denied doing so and had no idea who had put up the banners.

“The printers will say they are not at fault, and to be fair it is a business for them and the Home Ministry is responsible for issuing licence.

“The operators or exhibitors would hire agents, who are probably event management companies to print the banners and these agents would then hire foreign workers to put up the banners,’’ Ibrahim said.

“It’s so cheap. They pay 10 guys about RM30 to RM50 to put up the bunting and banners, usually a day or two before the event.

Ibrahim added that his officers had even caught foreigners red handed putting up the banners.

“Their modus operandi is to put up the banners late on Friday or early Saturday morning.

“Weekend is the best for them as the officers are not as active,’’ he said.

DBKL spends RM 5mil each year to remove illegal banners and bunting in the capital.

“It’s funny how they (the operators) plead innocence when caught, yet they make no effort to bring down the banners when their event is over.

“Some just leave the bunting there for months or even a year until it tears,’’ he added.

Several banners put up during Deepavali last year are rotting on lamp posts in the city.

Even banners promoting a photography festival from 2015 are still up.

After numerous unheeded warnings, DBKL plans to take a different approach in its fight against illegal advertisement.

“Now we are going after owners of premises where an event is to be held based on information stated in the illegal advertisements.

“If a carnival is happening in say PWTC, or KLCC, and the event is being promoted though illegal ads around the area, we will shut down the event,’’ Ibrahim said.

These ads offering sex enhancement medicine and toys can be found everywhere in the city.

“We have written to the management of these places and told them to be more responsible when picking clients who are using their venue for their promotions,’’ he said.

“We have written to the management of PWTC, KLCC and even Mid Valley Megamall informing them to be more careful and not to take us for granted.

“They have been receptive and extended their co-operation,’’ he said.

“So that way the premises owner will take responsibility (for the illegal ads) and this will keep the rest of the guys on their toes, particularly the organisers and the event management companies.

On top of that any commercial advertising via banners, bunting or posters without approval can result in the suspension or termination of their business licence.

Ibrahim added that the current maximum fine of RM2,000 is too low and that DBKL was reviewing the fines.

“We want to review the existing compounds and make amendments to increase the maximum fine from RM2,000 to RM50,000 as a deterrent,” Ibrahim said.

“All this while, those caught have no qualms paying RM2,000 fine when they can rake in millions from a weekend event,’’ he said. 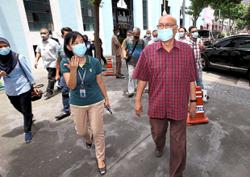 No need for drugs to have monetary and illegal value