The new fresh and warm ambience of Wafflemeister at its new branch in Bangsar Baru. The cafe, which opened last October, is the new hangout place in Bangsar. — Photos: AZMAN GHANI/The Star

Many were hooked after trying the waffle and soon, the Wafflemeister kiosk became a favourite place to have waffles.

However, in October last year, Mohd Shafiq decided to relocate to a cafe in Jalan Telawi 3, Bangsar.

“We wanted to cater to a larger crowd so we moved to Bangsar for a bigger space and to give customers that cafe appeal, compared to the KLCC kiosk which I felt was too small.

“Besides a bigger space and a nicer ambience, we have added a variety of waffles and crepes to our menu.

“We now have savoury waffles, savoury crepes, a good selection of brownies and cakes, smoothies, juices, thick shakes, gelato, milkshakes as well as sundaes on top of the sweet waffles.

Since the recipes, ingredients and method of preparation are sourced from UK, it is challenging to put a “Malaysian twist” to the waffle flavours.

“We are open to incorporating Malaysian elements into our waffle flavours but since the UK office manages us, it might take some time. The chocolate cinnamon flavour is our first creation though,” he said.

The Wafflemeister waffles are made from dough imported from Belgium.

Even the chocolate chips are from there while other ingredients are mostly sourced locally.

This unique and original mix of ingredients is what Wafflemeister is famous for.

The best-selling sweet waffle is unique as the Belgian dough is mixed with pearl sugar.

“Once it’s baked, a sweet caramel layer will seep through the surface of the waffle, giving it the name it deserves. Even if eaten on its own, it’s tasty and sweet.

“Our ingredients come in 20-feet containers on a quarterly basis, and we store our ingredients and keep them fresh,” said Mohd Shafiq.

The franchise was known as The Belgian Food Company in 1999 and was re-branded to Wafflemeister in 2013.

In fact, Mohd Shafiq was one of the earliest franchisees. The brand has also been franchised in the United Arab Emirates (UAE).

The Wafflemeister Bangsar branch opened last October and he plans to set up more kiosks in the shopping areas around the Klang Valley by next year.

“We plan to set up kiosks in malls where customers can just ‘grab and go’, as it is an easier way to have waffles for those in a rush.

“We plan to do this next year, with around two to three kiosks to be set up,” said Mohd Shafiq, who is the grandson of Datuk Habib Mohamed Abdul Latif, the founder of Habib Jewels.

“Wafflemeister also sells mini assorted waffles in a box, which is a new way of selling waffles.

“The box of six scrumptious waffles is priced between RM35 and RM40.

“We are also planning to sell our waffles online and we have also started a catering business,” he said.

The current location has become a favourite hangout place at night.

“The waffles are like late night desserts for our customers. I am glad business is good since we moved in October,” said Shafiq of the patrons who comprise locals and tourists.

The eatery is open from 10am to 1am, from Friday to Sunday, and from 11am to 11pm on weekdays. 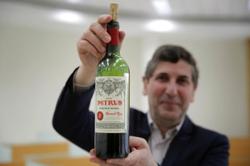