RESCUED endangered gibbons get a second chance at life in the wild, thanks to the single-handed rehabilitation efforts of one dedicated Peninsular Malaysia Wildlife and National Parks Department (Perhilitan) employee.

For the past four years, Mariani Ramli, a junior ranger with Perhilitan, has been running a temporary centre to rehabilitate the primates before they are released back into the wild.

StarMetro recently learned of the centre located on the Selangor-Negri Sembilan border and decided to pay it a visit.

While some rescued animals are sent to zoos, unable to return to the wild after being too “socialised” by humans, others, which still retain their wild instincts, can undergo controlled release back into the wild.

Before being released, however, these animals must undergo proper rehabilitation to relearn their natural behaviour and survival instincts.

When StarMetro visited Mariani’s temporary set-up, we were referred to Perhilitan’s headquarters to obtain permission for an interview, but the request was later denied.

Currently, there are two male and three female gibbons under her care. All five were rescued from poachers and dealers, with the youngest recently retrieved from a dealer’s house in Pasir Mas, Kelantan.

While slow lorises (N. coucang) and macaques had always been part of the illegal wildlife trade in Malaysia, now, even silvered leaf monkeys, gibbons and siamang are being marketed over the Internet.

The sale of gibbons and other primates takes a particularly high toll on the species, as whole family units are wiped out just to capture one infant for the black market.

The survival rates for such infants are low during “transition”, meaning more ape families are hunted to obtain a viable number of gibbons for the trade.

Even if the apes are rescued, it is not a happy ending, said Dr Shepherd.

One of the female infants under Mariani’s care and rehabilitation sneaks a look at the camera outside her enclosure.

“Most of the captured primates are mutilated – the gibbons’ teeth are ripped out, as they can inflict serious bites as they grow older,” he added.

This reduces the survivability of the primate, assuming they first survive infections setting in from the wounds in order to be released in the first place.

While some countries have established species-specific rescue and rehabilitation centres to “re-wild” rescued wildlife, Malaysia only has rescue centres to hold these animals, according to Dr Shepherd.

“Malaysia does have its rescue centres, but they are only for holding confiscated animals and are not designed for rehabilitation,” said Dr Shepherd.

“Without space to teach the animals, such as gibbons, to forage for themselves or develop social skills; you might as well kill them as you are not doing them any favours by releasing them,” he added.

While aware of Mariani’s efforts, Dr Shepherd added that it would be better to see such efforts formalised, with proper support and trained people.

Wong says Mariani’s set-up is run according to IUCN-drawn guidelines and protocols on gibbon rehabilitation.

“Hats off to people like Mariani, but what happens when more gibbons come next year and she has no place to house them?

“I would encourage the Government to not only establish a rescue centre staffed by trained caregivers, but also formal and legal species-specific centres to release rescued animals back into the wild,” the conservationist added.

Dr Shepherd said he was aware that such efforts would be costly in terms of land, money and training, but this would help preserve Malaysia’s natural heritage in the long run.

Friends of the Orangutans founder-director Upreshpal Singh pointed out that Mariani’s single-handed efforts were, however, at risk of being lost.

“As I understand from my Perhilitan sources, the gibbons were almost confiscated to be placed in a zoo or the department’s National Wildlife Rescue Centre in Sungkai, Perak,” said Upreshpal.

“This is a one-woman show as Mariani pays for everything, including the gibbons’ food, with no support from her employers,” he added.

Often, gibbons in captive have their teeth filed down to prevent the primates from inflicting bites on their human owners.

Wildlife conservationist Wong Siew Te, who assisted Mariani in setting up her rehabilitation centre, said the centre was run according to guidelines from the International Union for Conservation of Nature, of which Malaysia is a signatory.

Wong, who founded and runs the Bornean Sun Bear Conservation Centre in Sepilok, Sandakan, was the one who alerted StarMetro about Mariani’s efforts.

He said rehabilitation was an important step in preparing an animal for release back into the wild.

“Animals might not survive if they are released into the wild without rehabilitation, as they are not taught about proper food sources in the forest.”

“Or the animal might suffer bullying or even be killed by its own species or other animals because it was never taught about these threats,” Wong said.

Among examples of animals that were prematurely released into the wild are the siamang “Kadir”, which was a regular sight at the Kuala Koh National Park in Kelantan until his death in 2014. 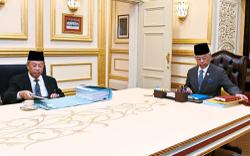