Some restaurants use the back lanes to prepare food. —filepic

You could cut the tension in the air with a knife when the Subang Jaya Municipal Council (MPSJ) Health Department was sealing a dirty restaurant in Taman Puncak Jalil, Seri Kembangan, for 14 days.

MPSJ councillor Anbarasan Murugesu took StarMetro to the upper floor of the shoplot. The owners had converted it into a kitchen without council approval.

On the way upstairs, flies flitted around a dark, grimy passage.

At the kitchen entrance, open sacks of rice grains sat on the floor.

A slight wind blowing in through the windows brought whiffs of foul smells.

Just a few steps away from the kitchen were the toilets.

Inside the kitchen, broken egg shells and dried pandan leaves littered the floor, which looked like it had not been washed for weeks.

Just below the sink was a shallow drain that ran to a raggedy hole in a facade wall. This is so that food waste and sullage from the sink can slosh through a pipe all the way into the back-alley drain.

Downstairs, a look through the grids revealed a curry cesspool stewing in the drains.

But the most disturbing sight was to see customers continuing to eat their food as enforcement officers were sealing the premises.

Catherine James, who lives in the area, was tucking into a plate of fried noodles and chicken, and did not even realise the premises was being sealed.

She went a little green in the face when told that the premises was being shut down for not observing proper food hygiene.

The number of eateries the Health Ministry (MOH) was compelled to close in the past two years reflected a poor awareness among Malaysians on food safety and hygiene.

Up till March this year, 645 of the 28,026 food premises inspected were ordered to close.

Already, 3,418 compounds have been issued for various offences.

A circular issued by the ministry on Food Hygiene Regulations 2009, which was fully enforced from January 2014, stated 33 compoundable offences for food operators.

They range from licensing to the transportation of meat, cooked food and raw fruits as well as vegetables.

Maximum penalties include fines not exceeding RM10,000 or not more than two years’ jail, or both.

Food handlers including hawkers must be licensed by their respective councils who will ensure that they have been vaccinated against typhoid.

A food handlers training programme was also started by MOH in 1996 in preparation for the 1998 Commonwealth Games.

Today, 251 entities are recognised by the Government as training centres.

Those applying for restaurant and hawker licences are advised to attend the course.

He cited an example of an eatery in USJ 10, Subang Jaya, which had been issued with 30 compounds but continued to run on full house daily.

“People who care about their health should give dirty eateries a wide berth.

“But in Malaysia, a dirty food stall or restaurant is not a deterrent to customers,” he observed.

It does not help that Malaysians have a “forgiving” and tolerant nature towards dirty food handlers.

At food courts and stalls, hawkers and restaurant workers openly peel prawns and cockles beside drains, reuse water already logged with food waste to wash dirty dishes, and store food in holey containers which are often seen left on roadsides or on wet kitchen floors.

Now with the influx of foreign workers operating food stalls, no one seems to be questioning if they have acquired the proper health checks and vaccinations.

Dirty eateries have proliferated in office buildings too.

In one such building in Shah Alam, a cafe was seen offering customers food on crockery speckled with dried gravy.

Flies teemed over the buffet line and the cashier-cum-waiter was smoking.

Farinazleen, a microbiologist and food safety expert, said the public might change their minds after looking at things from a microscopic level.

“Microorganisms in food can produce toxins under dirty conditions and wreak havoc on the body,” she said.

She cited the well-known incident of food poisoning at a wedding in Sungai Petani, Kedah, which claimed the lives of four victims in 2013, and of 40 schoolchildren in Buntong, Perak, the same year who had to be admitted for treatment after eating contaminated fried rice.

In Malaysia, a case of food poisoning involving more than two patients can be legally declared as an outbreak.

But alarm bells are not often set off because patients who may have eaten at a shop in Cheras may be living in Subang.

Hence when the person falls sick, the victim will most likely go to a clinic in Subang.

Meanwhile, another patient who has eaten at the same shop may seek treatment at a clinic in Bangsar.

As medical records of the two clinics are not correlated, there is no way to prompt the authorities to conduct a check at the eatery in Cheras, unless they get a tip-off from the public.

Farinazleen advised the public to be more selective when frequenting food outlets.

“The rules of food safety are easy to follow. For example, if food has to be left out, it has to be stored either above 60°C or, in the case of cut fruits and dairy, below 5°C.

“Raw meat must be refrigerated and must never be mixed with cooked dishes.

“Handlers must wash their hands before and after touching food.

“And most importantly, those in the food business must operate in a premises with running tap water,” she said. 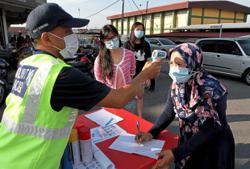