THE altercation between taxi drivers and ride-hailing drivers in Kuala Lumpur has reached boiling point with incidence of harassment increasing by the day.

City cabbies have become paranoid to the point that even innocent people are targeted.

Imagine having your vehicle forcefully stopped in the middle of the road and surrounded by a group of taxi drivers.

Then imagine having your passenger intimidated to get out of the vehicle while you are verbally attacked, all because they suspected you of being a driver of ride-hailing services such as Uber or GrabCar.

We had to endure this uncalled-for harassment when three of us were picked up at the popular tourist spot of Suria KLCC last week by a colleague.

The taxi drivers assumed we had called for a driver via a ride-hailing service and forced us to stop.

Two taxi drivers interrogate a driver whom they suspect to be from ride-hailing app at Suria KLCC while another one looks on. — ONG SON HIN/The Star

“GrabCar? GrabCar?” they shouted, as our vehicle was surrounded by four of them.

When we denied their claims, they allowed us to pass through with half-hearted apologies.

Ten minutes before that incident, we witnessed this exact scene played out at the same spot.

While waiting at the premier taxi stand, we witnessed taxi drivers rushing to the vehicle when a Caucasian woman got into the backseat of the car driven by a young man.

As the car made its way to the exit, the taxi drivers placed a traffic cone in front of the car, forcing it to stop.

This caused traffic to back up as they could not get past.

The taxi drivers made the driver wind down his window and started to interrogate him.

“Show us your licence!

“This is our area!

“Fikirlah sendiri (Think for yourself).”

These were just some of the phrases hurled by the taxi drivers.

While they were not physically aggressive towards the driver or passenger, their verbal attack was enough to prompt the woman to leave the vehicle.

All this while, the other motorists were stuck and blared their horns loudly.

There were no security guards visible during the altercation.

The entire episode lasted less than five minutes and looked like it had been played out numerous times before.

Now what disturbed us was there was no security personnel around to help the woman or anyone for that matter.

In fact, there was no sign of mall security.

Some drivers have opted to use the Truecaller app, which identifies callers. — Photos: ONG SON HIN and RAYMOND OOI/The Star

While previously such harassment were isolated cases, the situation, however, is getting worse as more and more cases of bullying are emerging.

This is particularly rampant in areas like KLCC, Bukit Bintang, Bandar Sunway and Ampang, which have been now dubbed as “hotspots” for harassment cases.

A source from GrabCar told us that in KLCC alone, there were at least 10 harassment cases reported daily by their drivers.

“During the early days of GrabCar in Kuala Lumpur, the type of bullying that our drivers had to deal with are more from intoxicated and unruly passengers, those who refused to pay or simply rude people.

“However, now we are dealing with incidences that are bordering on criminal behaviour,’’ he said.

A few weeks ago, a public relations firm director returning from Singapore was harassed by cabbies at the KL International Airport.

The Malaysian woman said she was waiting for her husband who was of African descent to pick her up.

“When my husband arrived, he called me from his mobile phone to alert me on his location. As I walked towards him, our car was immediately surrounded by angry taxi drivers screaming the words “GrabCar” repeatedly,’’ she said.

“My husband wound down the window and told them, “You idiots! You think they are going to give a black man a licence? They left him alone after that,’’ she said.

Last year, a Czech Republican was forced to protect the Uber driver who had picked him up from a mall in Kuala Lumpur by claiming he was just a friend, after a group of angry taxi drivers ambushed the man’s vehicle and threatened to damage it.

The man and his girlfriend had used the Uber app to hail the driver to Mid Valley Megamall.

He said as they were boarding the Uber vehicle, four taxi drivers followed them to the car and proceeded to threaten the driver.

It was reported that before they could manage to lock the door, the cabbies started knocking on the car and pulling the door handle on the driver’s side, which they eventually opened and proceeded to snatch the driver’s car keys and started yelling at him.

Then there was the case of a group of taxi drivers protesting against ride-hailing drivers in front of the Land Public Transport Commission (SPAD) headquarters in Kelana Jaya last September.

In the incident, they had lured a GrabCar driver to the location to be detained by SPAD.

The same week, the Star Online reported Big Blue Taxi Services founder Shamsubahrin Ismail announcing that cabbies in the city had indulged in vigilantism by tracking and “detaining” private hire vehicle drivers and handing them over to the authorities.

It was previously reported that the SPAD was looking at regulating ride-hailing apps like Uber and GrabCar.

“The Commission is undertaking efforts to ensure applications such as Uber and GrabCar are brought into the system and regulated.

“However this move will require time,” a spokesman had said.

Thinking up ways to stay safe 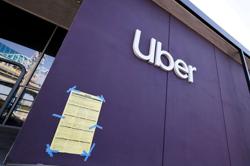