New design of monsoon drain being tested in PJ 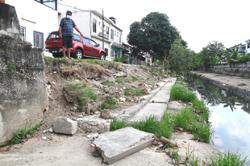 Narayanan taking a closer look at the newly upgraded drain.

A new method to prevent flash floods in Section 12 is now being tested out at the monsoon drain between the back lanes of Jalan 12/12 and Jalan 12/14.

Instead of using the normal drain widening method, the existing monsoon drain has been extended on both sides to hold excess rainwater during downpours.

The monsoon drain now has an extended water catchment area of three metres on each side of the drain.

During heavy rain, water will be stored at the sides before being slowly released into the main drain and channelled into Sungai Penchala.

“I think this method might be working because during the recent downpour, the water was contained in the catchment area and the drain did not overflow,” said Section 12 Residents Association president Datuk A. Narayanan.

He added that houses along Jalan 12/12 and Jalan 12/14 were often flooded during downpours.

Narayanan said the flash floods had always occurred in the more than eight years he has been living in the neighbourhood, but it had gotten worse over the past two years.

“The rain nowadays is just too heavy and the old drain cannot cater to the high water capacity anymore,” he said.

He said the flash floods usually lasted for about an hour or two and the water would recede fairly quickly.

This monsoon drain starts from Jalan Universiti, cuts through Section 12 to Crystal Crown hotel and on to Federal Highway before reaching Sungai Penchala.

“We will test this method out first to see if it works and if water still overflows, then we will lengthen the water catchment area.

“But according to MBPJ, the current one measuring 424m in length should be sufficient,” said Bukit Gasing assemblyman R. Rajiv.

Apart from Section 12, this method is also being tested in Section 6 to help prevent floods in Petaling Jaya Old Town.

In addition to these flood-prone areas, other hotspots in the Bukit Gasing constituency are being looked at including Jalan Railway 1/2 and Jalan 18/11.

“We are now having discussions about the one in Jalan 18/21, Taman Kanagapuram, because that drain runs through the Education Ministry’s land,” said Rajiv.

Other ongoing upgrades are at Jalan Harapan and in Section 5, where MBPJ is still trying to resolve the issue of houses extended into drain reserve. 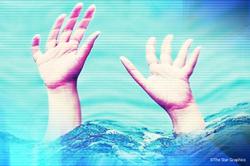