Devotees wading knee-deep into the sea to get closer to the floating chariot bearing the statue of Goddess Kali near the temple in Teluk Bahang. — Photos: GEORGE CHEAH/The Star

IN the Hindu pantheon, Kali is the awesome personification of Shakti, the supreme female divine power of the religion.

Her Sanskrit name means “She who is black” or “She who is death”, and there is a 119-year-old temple in Teluk Bahang, Penang, in her honour.

More than 20,000 devotees lined the beach outside Sri Singamuga Kaliamman Temple on Monday evening (behind the former Mutiara Beach Resort premises) to receive blessings from Kali, who is the Goddess of Time, Change, Power, Creation, Preservation and Destruction.

The devotees waded knee-deep into the sea to send out thousands of candle-lit floats of various shapes and sizes for the annual Maasi Maagam Theppa Thirunaal (Floating Chariot Festival), creating a field of light drifting in the twilight sea while fireworks lit the sky.

For two hours, an ornate chariot built on a barge carried the temple’s consecrated, eight-armed statue of Kali out to sea, bedecked in hundreds of flower garlands and holding a trident, sword and other implements associated with her powers.

The floating chariot, towed by a trawler, returned at 9.30pm anddevotees waited with clasped palms to receive blessings.

Temple chairman A. Sathasivam said the ritual was started about four decades ago by local fishermen who worshipped the deity.

Thousands gathering by the beachfront near the Sri Singamuga Kaliamman Temple in Teluk Bahang for the Maasi Maagam Theppa Thirunaal annual festival.

“They first used a sampan to carry the statue to sea. The fishermen prayed for safe journeys and good catches,” he said.

Over the years, he said, the rite drew worshippers from afar and today, they came to make vows and pray that their wishes be fulfilled.

Newlyweds R. Arjun, 30, and S. Sowmya, 28, from Taiping, Perak, said it was their first visit to the temple.

“I heard about this festival from my friends so we thought of witnessing it for ourselves.

“I have never seen a floatingchariot. This is colourful and exciting,” Arjun said, adding that they were on a week-long holiday.

About 100 stalls were set up along the road leading to the temple selling lamp floats, ornaments, religious paraphernalia, traditional costumes, food and beverages. 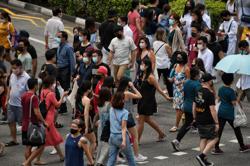