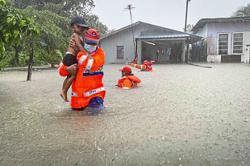 A full size Formula One car hung on the wall as a painting as Wong envisioned it.

KUCHING: Alex Wong likes living life unconventionally. In the 1990s, he was one of Malaysia’s first jetski racers to turn pro, winning eight international races during that decade.

Once age caught up, he turned to songwriting.

He was known as SingleTrackMind, recorded two albums and earned three AIM nominations.

In the 2000s, Wong was the opening act for Deep Purple and INXS when they played in Singapore and Malaysia.

By 2010, Wong became a full-time traveller, writing a best-selling book about it.

Wong with display items that will go into the cafe.

More recently, during the Bersih4Kuching rally, Wong was a speaker. (He spoke about his father’s turbulent political career, including a stint under the Internal Security Act.)

Wong knows he can fail and is fearless. This week, he is opening a restaurant and it harkens back to his first love; motorsports.

“We have a Formula 1 car, full size, not a scaled replica, on the wall as a painting,” Wong told StarMetro recently.

The idea for the cafe, Feast and Furious, came about fast.

“I collect motorcycles and my house was getting crowded so I was looking for a place to keep them. A friend told me people want to see my bikes.”

Siaw’s racing legends at Feast and Furious cafe is the latest street art piece in Kuching.

That sparked off the idea of opening the restaurant. He started planning in September and began construction in November.

The construction of the cafe has already caught the eye of many. Wong had commissioned two local artists to do a motorsports mural depicting his heroes.

There are two giant two-storey high portraits of the greats like Valentino Rossi and Ayrton Senna.

“I’ve got an under-the-ground glass floor display with lights in it.

“It will be filled with model cars. There’ll be bikes you can sit on and bikes hanging from the ceiling. I’m thinking we can fit 18 to 19, but we’ll start with 11 or 12,” Wong said.

Despite being a social activist, Wong will keep politics out of his restaurant. “I do like to talk politics but this place is about having fun. Social commentary might make the food taste awful.”

When asked why he was opening a restaurant at this time, Wong responded: “I told my operating partner, if we can survive these hard times - because everyone is really broke - then when the good times come, we’ll be fine. Just make sure we are good, and we’ll ride through this bad stuff.”

For about three weeks, Siaw worked on a scissor lift painting the racing heroes mural at the Feast and Furious cafe in Kuching.

Daphne Siaw was a science student who always drew on pieces of paper underneath her textbooks.

“When I was a kid, my mum was would tell me, study from 2pm to 5pm, then 8pm to 10pm but I would have paper under the books and would just draw,” Siaw said.

“Despite that, I still did well in all my subjects except the science ones,” said Siaw with a laugh.

As a child, she never quite knew what she wanted to do. Describing her upbringing as “typical”, after university she joined an architectural firm. Siaw worked on the racing legends mural for three weeks.

“It spent about four to six hours everyday from 2pm onwards. We came up with quite a few concepts.

“The owner placed a lot of trust in us.”

The cafe’s mural is the latest in what seems like a street art movement that is gaining momentum in Sarawak.

Siaw and the brown bear she painted on her bedroom wall.

A stone’s throw away from the cafe are several large-scale murals depicting hornbills and cats.

Underneath Satok Bridge, there is a well-received Star Wars character piece that drew considerable attention recently.

Some 500km away in the timber town of Sibu, murals of local history have made the news nationally.

Siaw has also painted on the walls of several other restaurants and bars around town.

Currently working on a website to feature her works, Siaw has even developed characters in her drawings.

The best piece is on her bedroom wall.

“It’s a brown bear. It’s quite cute,” Siaw said, flipping through a portfolio on her phone, which includes the bear in a Year of the Monkey season’s greetings pose and various other sketches of the bear accompanying her in her daily life.

“You just draw. How many a day, you don’t know. Like all other students, you go to university and then get a job.

“Then you come out and slowly discover what you really like.

“Sometimes it depends on the environment but it’s up to you how you work towards what you believe in,” she said.