Dang, who runs a handbag stall in Petaling Street, had his licence revoked although he claims he had never employed any foreign worker.

PETALING Street Traders are unhappy over being asked to sign a letter of undertaking by Kuala Lumpur City Hall (DBKL) to state that if they were to flout the local authority’s rules, their licence will be revoked without any notice.

Kuala Lumpur Hawkers and Petty Traders Association chairman Datuk Ang Say Tee described the rules as unfair and unreasonable, questioning why only traders in Petaling Street were singled out for the exercise.

The letter listed down seven dos and don’ts such as: traders must ensure that only they or a legitimate helper man the stalls; that they cannot sell/rent/sub-let the stalls to a third party; and they are also not allowed to hire foreigners to man the stall.

Foreigners were only allowed to carry goods, push trolleys, load and unload goods and to help store goods one hour before and one hour after they start and close their business.

Traders must also ensure that they displayed their licence. 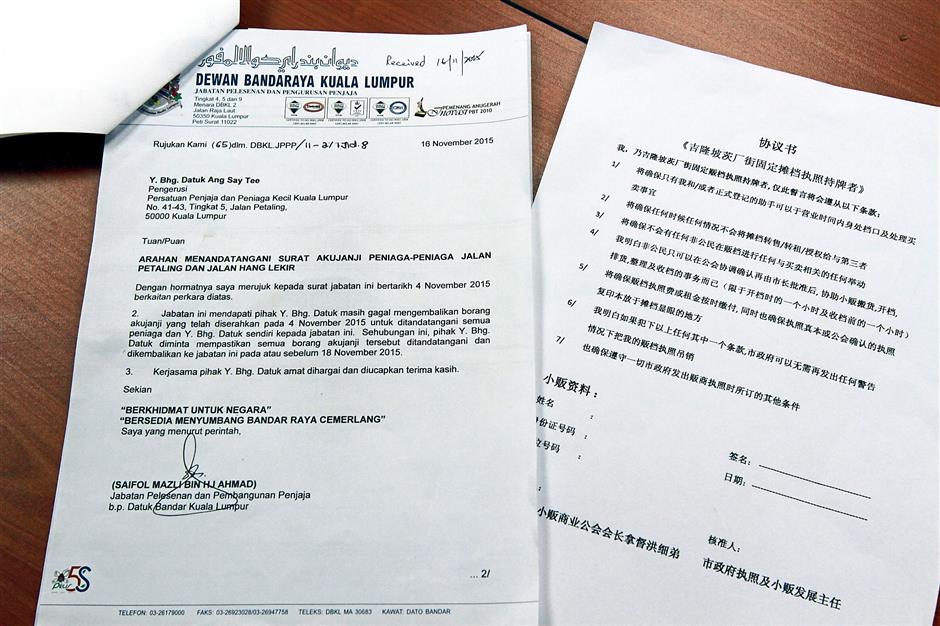 The letter from DBKL which gives traders two days to sign.

If they failed to adhere to the rules, DBKL would revoke their licence without prior notice.

“These rules, especially the last one, stating they will revoke our licence without notice, is unfair.

“Why are we being targeted? Why must we sign this undertaking that is deemed unfair?” Ang added.

Committee member Lee Jon Sem said, in January, about 56 traders had their licences revoked after being accused of hiring foreign workers.

“No notice was given and the traders had no idea what rules they had flouted.

“This is so unfair. There was no proof at all and they just revoked the licences,’’ he said.

Dang Aik Ching, 70, who sold handbags in Petaling Street, claimed that he had never employed any foreign worker from the time he started the business.

“Suddenly my licence is revoked. I have been here for 30 years and many of my friends have grown old, yet we are treated like second class citizens,’’ he said.

“We are old and our children are not interested in taking over the business.

“What is wrong is getting a little help?’’ asked C.K. Lim, a long-time trader in the area.

“This letter they are asking us to sign is discriminatory against us – why target us?’’ said Lim.

Traders were informed about the letter of undertaking on Nov 16, and were given until Nov 18 to sign the paper.

“This is unacceptable and no one will sign the letter,’’ Ang said, adding that he would take the matter up with the mayor.