The draw of Deepavali bazaars

DEEPAVALI bazaars in Kuala Lumpur have become a staple and a much-looked forward to tradition in the run up to the Festival of Lights.

With Deepavali less than two weeks away, the bazaars in the city are in full swing. Yet, traders are lamenting that business has drastically dropped compared to previous years. 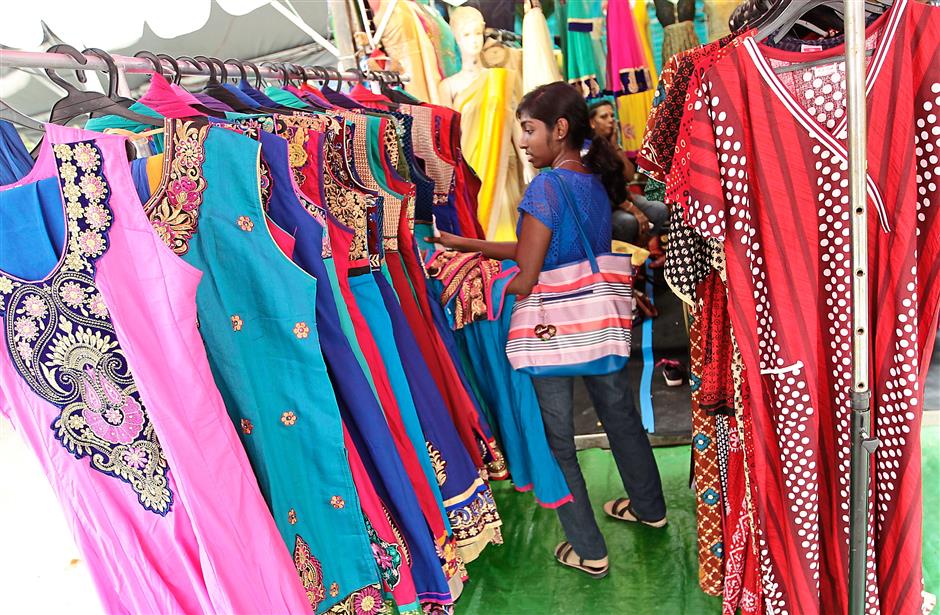 (A shopper looks through rows of colourful punjabi suits for sale at the Deepavali bazaar in Jalan Masjid India.)

Shopowners in Brickfields, Lebuh Ampang, Jalan Ipoh and Sentul are allowed to carry out promotions outside their shoplots for a fee.

A StarMetro check at the bazaars in Jalan Masjid India and Jalan Chan Ah Tong showed a lack of crowds at both bazaars, especially for a weekend.

Most were seen either browsing or going into the bigger departmental stores to avoid the haze.

Jalan Masjid India trader Haswaani Subramaniam, who operates an Indian snack shop with her family, said they hoped business would pick up next week. (Glimmering Indian earrings on display at a stall in Jalan Masjid India.)

“There has definitely been a drop in the number of customers this year, possibly because of the haze and rising costs.

“After operating here for the past 15 years, we do have some loyal customers who continue to purchase from us. But we need more customers,” she said.

Haswaani added that her family began preparing for the bazaar about three months ago.

“We make all our products, so we had to prepare early. Some of the more popular ones include murukku, achi murukku, and nei urundai or ghee balls,” she said. Another trader in Jalan Masjid India, Vickneswary Munusamy, 26, who sells Indian jewellery and accessories, said many people were waiting for the month-end salaries before shopping.

“It could be a slow start because some have to wait for salary advances or Deepavali bonuses. So far, I have had several customers who come to survey their products before purchasing,” she said. (Traders seen frying up a batch of murukku for customers)

“We sell artificial flowers made from bark and they have been selling like hot cakes. They cost almost as much as fresh flowers, but can last for up to six years.

“We import them from Cambodia, but we do all the flower arrangements,” he said.

Its secretary Parama Sivam said traders would be going all out within the next week.

“Business usually picks up the weekend before Deepavali. That’s when we usually get the crowds coming in,” he said.

However, the reception to the new place has been lukewarm at best.

“Many of the traders are worried about the increase in costs and the implementation of GST.

“In previous years, traders could purchase goods from wholesalers with a 60% to 70% payment of the total costs,” he said, adding that full payment upfront was expected this time around.

“Most bazaar traders cannot afford to pay in advance as they depend on profits from their sales to make the payments,” he said.

This year, traders’ associations and non-governmental organisations have been given the mandate to run Deepavali bazaars in the city from Oct 10 to Nov 9.