Towards zero abandoned vehicles in PJ

A warning notice by MBPJ pasted on an abandoned car. The owner, however, failed to heed the council’s warning to remove the car himself.

THE Petaling Jaya City Council (MBPJ) aims to rid the city of all abandoned vehicles left unclaimed by the side of the road.

“We are stepping up enforcement this year and we are striving to achieve zero abandoned vehicles on the road,” said Petaling Jaya mayor Mohd Azizi Mohd Zain.

He added that the enforcement team had made its rounds and identified a few hotspots for abandoned cars.

Among the worst is SS20 where more than 82 cars were found abandoned, followed by SS1 to SS9 with 52 cars.

Others are in Kota Damansara with 51 cars and Kampung Kayu Ara with 35 cars besides some in low-cost housing compounds left there by residents. 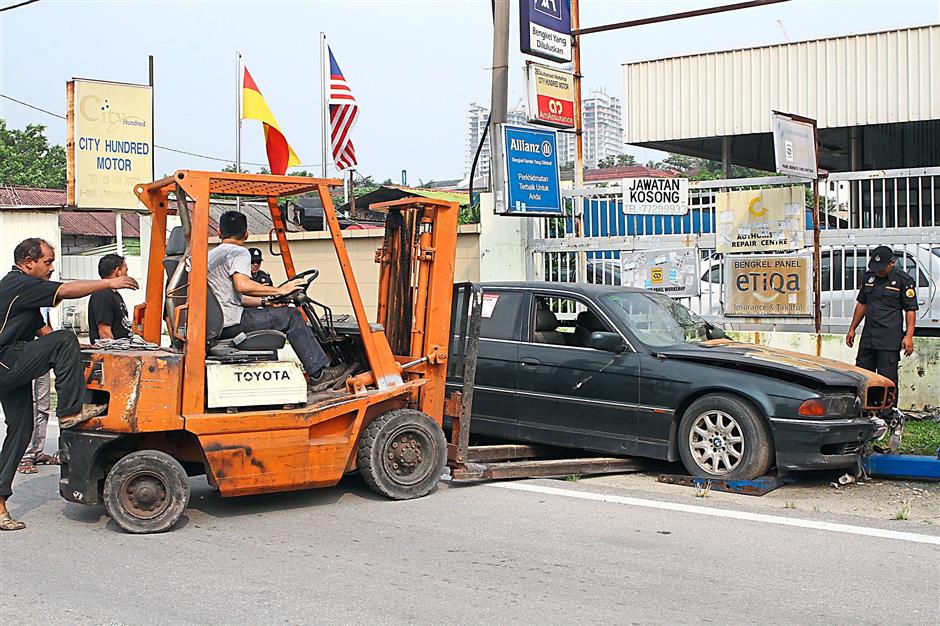 A forklift being used to lift an abandoned car before it is towed away by MBPJ.- Photos BRIAN MOH/The Star

“MBPJ will also be visiting car workshops and mechanics in the city as we believe they are among the culprits who abandon the cars in commercial areas.

“They salvage what they can from a car and leave the rest to rot,” said Mohd Azizi.

He said most of the workshops found doing this were operating in hidden areas that were not easy to spot by MBPJ’s enforcement team.

So far, there have been 510 complaints about abandoned vehicles lodged by residents with the council this year.

Of this figure, 286 cars have been towed away and 188 disposed of after owners failed to collect them.

The towed vehicles are sent to MBPJ’s new rented depot in Section 26 in Shah Alam.

“We have procedures to follow before disposing of the cars and we will try to get in touch with the owners,” Mohd Azizi said.

Within a month after the vehicles are towed, MBPJ will do a search with the Road Transport Department (JPJ) and check with the police to ensure they had not been reported stolen.

Summonses will then be issued to the car owners totalling up to RM600 per vehicle.

“We will also be issuing summonses to workshop owners who abandon unwanted cars along the road outside their premises.

“If they fail to get rid of them properly, we will take action,” said the mayor.

He said the abandoned vehicles were often left in parking lots, adding to the congestion in busy commercial areas.

He is also worried that stagnant water found in abandoned vehicles may become a breeding ground for Aedes mosquitoes.

Recently, a total of 14 abandoned cars along Jalan Kekwa in Kampung Kayu Ara were towed away by MBPJ.