A DRUG rehabilitation centre in Petaling Jaya dedicated to help addicts kick the habit of “chasing the dragon” is now chasing after money instead.

Kenosis Home was already experiencing shortage of funds and saw a surge in members, adding 25% more to its ranks in just half-a-year.

Centre co-founder Pastor Richard Lee revealed that many drug addicts who could not find work under the present economic climate have joined the centre to kick the habit.

“They no longer have money to buy drugs and are forced to find avenues to stop their addiction to it.

Though the centre had reached its maximum capacity, its doors remained open to addicts who sincerely wanted to quit.

Founded in 2001, the centre now houses more than 150 members across seven locations in the Klang Valley.

Drug addicts who seek help at the centre are referred to as “students” as they would have to learn to wean themselves off drugs via the centre’s rehabilitation programme, which lasts two years, Lee said.

“Students” who successfully go through the first nine months of the programme are allowed to take part in contract work as painters or renovators, albeit under the scrutiny of staff from the centre.

Lee revealed that revenue from construction used to bring in 60% to 70% of the RM70,000 needed to run the centres every month.

The money is also used to run a mobile soup kitchen in Kuala Lumpur every Thursday and Saturday.

“We have lost half of our usual income that we usually get from construction work.

“Not many want to renovate their houses during this uncertain time,” he said.

Proving his point, Lee pointed out that more than three-quarters of the “students” at its Petaling Jaya centre were indoors at noon as there was no contract work for them.

Response from donors were also sluggish, the pastor admitted.

He said many were reluctant to lend a helping hand because of the stigma attached to drug addicts.

The “students” follow a rigid daily schedule, including waking up at 6am followed by Bible studies, worship sessions and chores.

Such programmes at the centre produced success stories such as Eng Boon Leng, 53, who now works full-time at the centre.

Eng said he was a successful property agent two decades ago but squandered all his money on drugs.

“Eleven years ago, a pastor introduced me to Kenosis.

“Since I completed the programme, I have been clean,” he said, adding that the programme at the centre provided them counselling and spiritual guidance apart from removing their physical addiction. 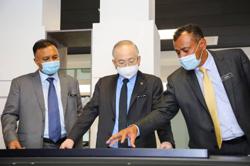