“There was a slight delay. When the Prime Minister visited the site before Hari Raya Aidilfitri, we ask Kuala Lumpur City Hall (DBKL) to install a permanent roof outside.

“DBKL called for tender to do it and it took time. We apologise because operations could have started earlier, but without the roof, it would have been harder to distribute food here,” Adnan said during a press conference. When asked if it would be a permanent structure, he said it could stand for up to five years.

According to Adnan, Sinotech Modular Housing Co Ltd, a construction company from China, bore the cost of constructing the prefabricated centre.

“The work started on May 21 and was completed within three weeks,” he said.

He also announced that DBKL was in charge of maintaining the centre, adding that the homeless could use the facilities such as showers or just to rest.

When asked about the second shelter that was near-completion in Jalan Pahang and who would be managing it, Adnan said it was expected to be operational within two months and the responsibility of managing it would be shared by various agencies.

“The ministry will be responsible for coordinating the effort. Other parties such as DBKL will be doing the maintenance while the non-governmental organisations can help in distribution of food,” he said, adding that the RM10mil cost for the Jalan Pahang shelter was sponsored by Malaysian Resources Corporation Bhd.

“We will be distributing on Sunday, Monday, Wednesday and Friday nights at the centre.

“Kechara Soup Kitchen will distribute food here on Saturday nights while Need to Feed the Need (NFN) will do so on Thursday nights. Kaseh4u may take up Tuesday nights,” she said at the press conference with Adnan.

Munirah said volunteer organisations were working on plans to also hand out food at lunch.

When contacted yesterday, Munirah said they had fewer people coming to the Medan Tuanku centre compared to their usual crowd of 450 in Jalan Tuanku Abdul Rahman (TAR).

“There were possibly 330 people only. We heard that many will not make the move to Medan Tuanku because other non-governmental organisations will take over the spot we have vacated. To me, that is fine.

“We are happy to move to the centre because we worry about the safety of the toddlers who run freely so close to the busy Jalan TAR. Here, the centre is away from the busy road,” she said. She said however, mothers and the elderly find the distance troublesome.

“I understand that too. If our volunteers could ferry them back and forth that might be a solution. I will talk to them about it soon,” she said.

She said there was a need for benches for the elderly and pregnant women at the centre.

“DBKL agreed to provide benches around the distribution area. Another suggestion would be for them to provide picnic-like benches at the vacant lot next to the centre for the homeless to sit and eat,” she added.

Munirah said the NGO looked forward to when DBKL completing the permanent roof which would properly cover the area.

“The temporary roof is a bit too small for the area.

“We were told the new roof would most likely be fully ready by end of next month,” she said.

She added that a few of the homeless people used the toilets on that day but not the showers.

On Sept 23, StarMetro reported that volunteer organisations were baffled by Kuala Lumpur mayor’s recent statement that none of them have stepped forward to help run two newly built shelters for the homeless.

Munirah said they were surprised by the statement as they had been meeting regularly with Federal Territories Ministry and DBKL since last year to discuss the matter.

She had said they had been ready to move to the Medan Tuanku Feeding Centre since July but construction work was still going on.

“DBKL told us to wait until it was ready,” she added.

It was reported on Sept 17 that DBKL was appealing to soup kitchen operators and non-governmental organisations in the city to help run the shelters.

Kuala Lumpur mayor Datuk Mohd Amin Nordin Abdul Aziz had said the completed shelter in Medan Tuanku Abdul Rahman and another shelter under construction in Jalan Pahang should be handled by the Welfare Department. 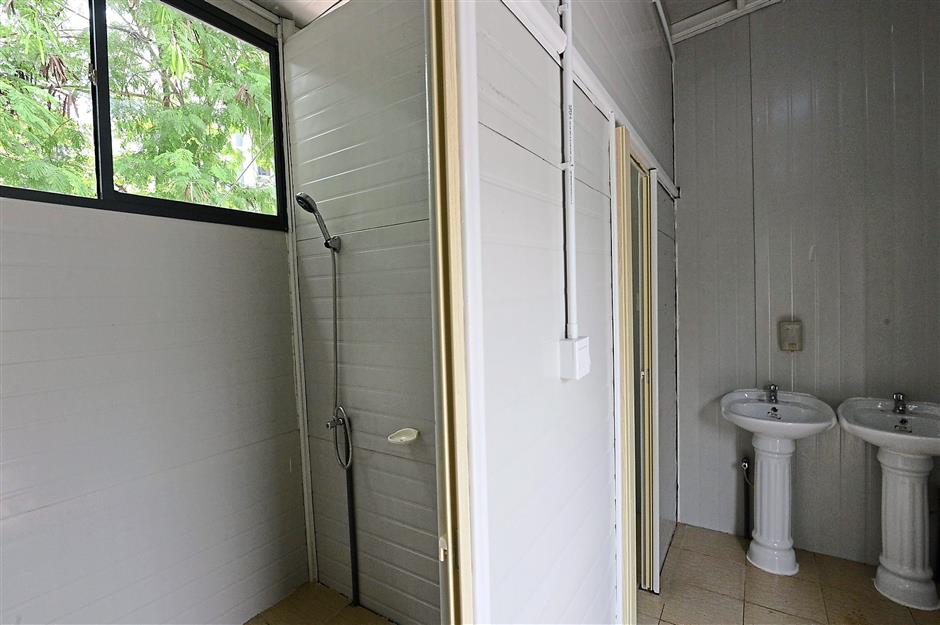 The homeless can also opt use the shower facilities available there.

StarMetro also visited the three-storey shelter in Jalan Pahang which when completed would have 250 bunk beds, family rooms, a kitchen with dining area, a living room, medical room as well as shower stalls and toilets.

There are also washing machines and dryers for the homeless to do their laundry.