Wisma Central at heart of study

THE unassuming Wisma Central has been chosen to be the centre of a study by 18 participants of the Architectural Association of London’s (AA) Visiting Programme for Kuala Lumpur.

The programme is part of the Streetware South-East Asia visiting programme.

The term “streetware”, coined by AA’s programme director Naiara Vergara, is used to describe the tangible and intangible things that give a street character.

Jointly organised by AA and Think City, a community-based urban rejuvenation organisation, the 10-day course was conducted by Vegara, Tejas Sidnal, Mustasha Musa and Yong Pei Yee. The lucky 18 participants included two new architecture graduates, two working in the related industry while the other 14 are current architecture students (all Malaysians).

Most are in second or third year from Taylors University, UiTM, Liverpool University and RMIT (Melbourne).

This year, the topic of the study focused on urban regeneration and Wisma Central was the perfect subject.

The 40-year-old building in Jalan Ampang had provided affordable services to the neighbouring business for many years. 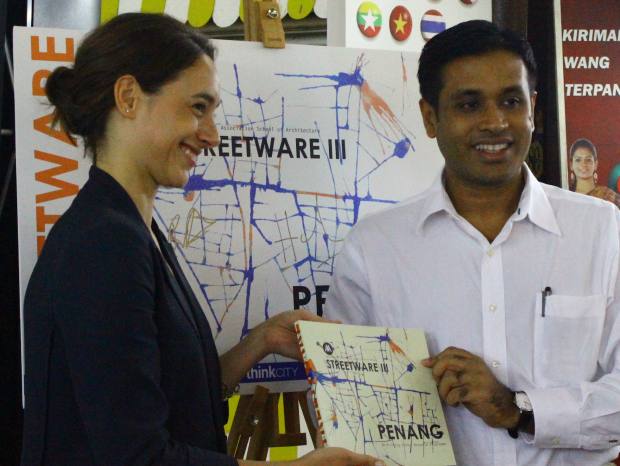 Vergara (left) and Hamdan at the book launch of Streetware of Penang III.


There are printing shops, tailors, inexpensive eateries as well as travel agencies there and in recent times, galleries and architectural firms have also made it their home.

Think City executive director Hamdan Abdul Majeed said Wisma Central was chosen as it was unique in what it offered in the area.

“Think City is interested in making our cities more liveable, and a part of that is having diversity. Wisma Central offers a change from the increasing uniformity of the KLCC area.

“By offering some alternative designs, it shows that adaptive re-use of a building is possible,” he added.

The media were given an insight into the work of the students during a two-hour briefing at Wisma Central on July 10.

During the briefing, there was also a book launch of the Streetware Penang III, a compilation of works produced by the AA Visiting School project last year.

The book is the end-result of a three-year journey by the AA and local architecture students on the Streetware in George Town, Penang.

A group of Malaysian architecture students looked at the water’s edge of the Unesco site, and produced designs and ideas that could transform the coastal region, making it more attractive for the residents and visitors.

As the last book in a series of three, it completes the whole task of the AA school, that had looked at the Unesco site in year one, the edge between the site and the buffer zone in year two, and finally the water edge in year three.

George Town now has the Special Action Plan, which is part of Think City’s partnership with the Aga Khan Trust for Culture. The waterfront is a part of that project, but will take a number of years to implement and the book will be a major reference point during the process.