Night spot: One of the karaoke centres in Metro Square.

TAMAN Medan, along with the surrounding areas of Taman Seri Manja, Taman Maju Jaya and Taman Seri Sentosa off the New Pantai Expressway and Jalan Kelang Lama, is home to some of the poorest residents in Kuala Lumpur.

It has long been noted for a multitude of social problems, including illegal gaming and e-casinos, prostitution, drug peddling and the illegal sale of alcohol.

Lawlessness seems rife in these neighbourhoods with illegal dumping along the Klang River and sand mining going unpunished.

More recently, Taman Medan found itself thrust into the limelight after about 50 people protested over a church’s decision to display a cross on the facade of its shophouse premises. Site of recent protest: A cross used to hang on the front of this Taman Medan church but it was taken down by church leaders on April 19 following a protest by some residents.

The protesters claimed the religious symbol could influence Muslims.

According to the Community of Praise Petaling Jaya Church’s senior pastor Paul Packianathan, although it had been operating in the shoplot for over a year, the cross had only been placed a couple of days before the April 18 demonstration.

While both the Petaling Jaya City Council (MBPJ) and the police have been carrying out enforcement action and raids in the areas, illegal activities continue.

Metro Square, the commercial development where Community of Praise Church is located has been likened to a “ghost town”, with most of the shops unoccupied and shuttered.

Almost directly opposite the church, schoolchildren could be seen taking off their white school shirts, donning T-shirts and walking into a karaoke outlet on weekdays.

Meanwhile, illegal alcohol joints openly sell cheap liquor, including one operating in the backlane between two shoplots during a Saturday night market in Taman Medan. Rest spot: There are a number of hotels in PJS 1, no surprise given the industrial and commercial developments nearby.

The place seemed to be well-guarded, with at least four lookouts and even guard dogs.

Drug peddling is also conducted openly, with jobless youths pushing the substance in the backlanes between shops.

They also use abandoned units in nearby low-cost apartments as distribution centres.

One resident, who only wanted to be known as Raja, said there are several ‘potong kereta’ shops in Taman Maju Jaya.

“Even the authorities know about these workshops where you can buy used spare parts at a much lower cost.

“I have also seen many youths on motorcycles selling drugs.

“You can identify them easily because they carry sling bags and do their business quickly,” said Raja. Corner pocket: Right down the road from church in the centre of the cross controversy, there is a 24-hour snooker centre.

Charanjeet Kaur, a resident in one of the condominiums within the vicinity of Taman Medan, said she does not feel safe and related how snatch thefts and car break-ins were common in the neighbourhood.

“I can see drug deals taking place from my window,” said Charanjeet.

Since moving to the area in 1998, she has fallen victim to an attempted robbery where her car’s window was smashed while her husband’s car was stolen.

Charanjeet was also the victim of a snatch theft and said vandalised cars are a common sight in the area.

Residents are afraid to go to the authorities as they fear being harassed by thugs.

A Taman Seri Sentosa resident who only wanted to be known as Ahmad said there were over two dozen gaming centres in his neighbourhood. “There are cybercafes which are actually e-casinos in the Taman Seri Sentosa shoplots near the police beat base.

“Tontos (touts) are seated outside the shoplots as look-outs.

“Tontos only let in regulars and those known to the operators and they also have CCTVs monitoring the players inside,” said Ahmad, who is a former tout. Well connected: There are numerous cyber cafes in and around Taman Seri Sentosa.

One e-casino, operating behind pull-down metal shutters, had a number of look-outs with non-functioning street lights and strategically parked cars shielding the shop from curious eyes while patrons enter and exit through a swing door in the shutters.

Not surprising then that in 2011, former Deputy Home Minister Datuk Abu Seman Yusop said Taman Seri Sentosa was one of the 11 crime “hotspots” in Kuala Lumpur. 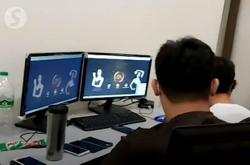 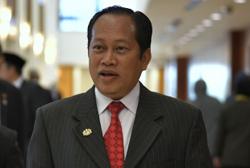