School building unsafe due to cracks caused by nearby construction

Too close for comfort: The massive construction (foreground) next to SK Taman Sungai Besi Indah is ongoing and earth movement is causing cracks in the school building.

SK TAMAN Sungai Besi Indah in Seri Kembangan has been ordered close indefinitely after it was declared unsafe when deep cracks developed on two of its buildings.

The decision to shut down the school temporarily was made at a meeting at the school yesterday afternoon.

Parents, he said, had been told of the school’s closure via SMS. 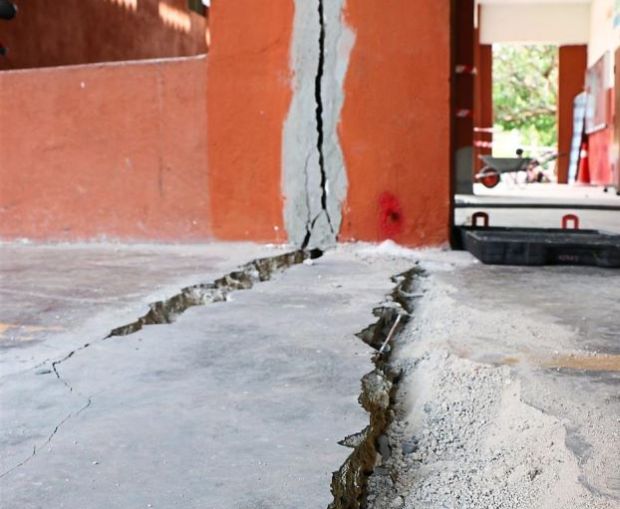 “A geology study at the school site showed earth movement of between 2mm and 3mm per day and the situation is worsening.”

Block B houses a computer room, toilet, canteen, library and classrooms for Year One to Year Three pupils.

Marzuki said the cracks started to form following the development of a 26-storey condominium project next to the school.

“Cracks appeared about a year ago when the project started.

“However, the situation has worsened since early this year with the cracks becoming gaping holes, some as wide as six inches,” he said, adding Block B was sinking too.

He said cracks were also found in Block A, which houses the classrooms, and they are worried for the safety of the children studying there.

It is understood that the school operates in staggered sessions as there are a limited number of classrooms.

Marzuki said the children would be evacuated to a new site, which has yet to be determined, next week.

“We are discussing with the Education Ministry to determine where the children would be placed temporarily,” he said. Cut across: A huge crack running across a classroom.

A group of parents had protested at the school yesterday, saying their children’s lives had been endangered and wanted the authorities to take immediate action.

PTA deputy president Zaidi Idris was quoted as saying the problem had been raised with the District Education Office, Selangor Education Department, Education Ministry and Subang Jaya Municipal Council, but to no avail.

“Cracks have formed on the school walls, pillars, floors due to the piling works nearby.

“Although the developer repaired the damaged structures, it would recur,” he added.

Water supply was also disrupted for two days due to a burst pipe, he said.