Lending a hand: Over 300 people volunteered for MBSA’s first of seven planting programmes under the Shah Alam Trees for Life 2015 initiative. Among them were ECO Warriors, Politeknik Sultan Salahuddin Abdul Aziz Shah, and volunteers from the J.C. Jacobsen Foundation (pic).

About 300 volunteers helped plant 1,500 trees along a 1.6km stretch that covered Section U1, U2 and Jalan Montfort for the Shah Alam Trees for Life 2015 programme.

Initiated in 2010, the project will have seven sessions this year. Thanks to a RM45,000 sponsorship by J.C. Jacobsen Foundation, three species of foreign plants that are able to weather the Malaysian climate will also be planted.

In an effort to educate the young volunteers, Universiti Putra Malaysia senior lecturer Jean Weber provided lots of information on local forests during the event and warned them that neglect could lead to the extinction of local species of lowland plants.

“Malaysia’s lowland forests are currently endangered because it is easier to carry out logging activities in low-laying areas compared to highlands. 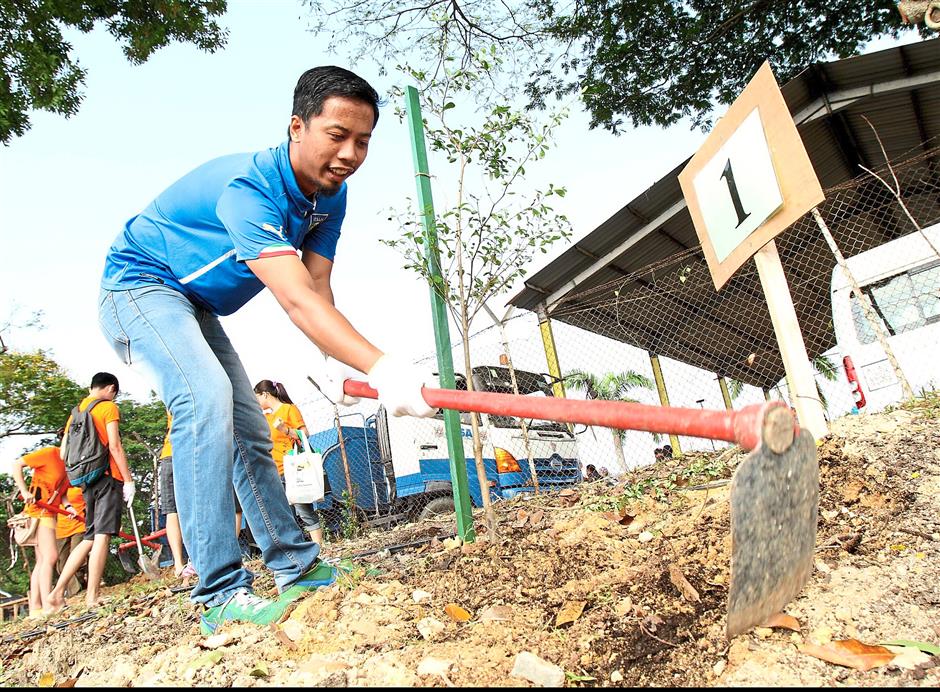 Keen to contribute: One of the volunteers preparing to plant a sapling.

“The Dipterocarpaceae are lowland trees and make up about 50% of the lowland forest canopy with characteristics distinct to vegetation in the lowlands. But this species is likely to disappear if nothing is done.

“We cannot believe that we can improve on nature.

“My years of research has shown that one cannot improve on what has had millions of years to perfect itself,” he said.

He added that local plants might be difficult to maintain at first, but in the long run, would thrive and must be preserved to avoid extinction.

Volunteers who attended the event included those from NGOs such as Eco Warriors and Fraser Place Kuala Lumpur as well as educational institutions such as Sunway University College, Politeknik Sultan Salahuddin Abdul Aziz Shah, and Universiti Selangor (Unisel).

However, Shah Alam mayor Datuk Ahmad Zaharin Mohd Saad was keen to draw in volunteers from the city itself.

“Hopefully in the future, more people will join us. We also hope to inspire the younger folk to participate.

“Another six similar events will follow suit this year, according to various zones,” he said.