Rooms and features that offer customisability for buyers Cosy setting: The dining and living room in the Teak Villas show house in Lang Valley.

At the launch of its show house units located in Lang Valley, the company’s general manager, Deric Loo, said construction for all 62 units of its double-storey guarded terrace house had begun last December.

“Around 30% of our units are already snapped up, and the project is expected to be completed by May 2016.

“Each unit is perfect as a family home, as we offer an open floor plan that makes it ideal for your own design, and a beautiful view of the greenery in the yard.

“Our bedrooms are also large enough for buyers to create a comfortable and relaxing private space,” he said at the event recently.

Loo said one of the noteworthy features of the house was the suite-like master bedroom.

“It is a room within a room, where the rest of the space can be used as a mini home theatre, study or even for a baby crib.

“It is up to the buyers on how they wish to utilise this space,” he said.

Loo also noted that there would be a new 30m-wide access road connecting the Lang Valley area to the North-South Expressway soon.

“We are planning to launch our mixed development project at the new access road in the near future.

“It will comprise commercial, residential and recreational space on a plot of land measuring more than 5 million sq ft.

“This would be ideal for residents living around Lang Valley as it caters to their needs and wants,” he said.

The Teak Villas terrace house units have four bedrooms with attached toilets each, with a built-up area of 1,850 sq ft and a lot size of 22’ x 70’.

It is a gated and guarded community, with a central monitoring system and closed-circuit televisions (CCTV) installed.

During the show house opening, which was held in conjunction with Chinese New Year, guests were treated to a buffet spread and an appearance by the God of Prosperity handing out ang pow. 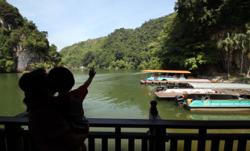