Gambling in the new age

Sneaky bookie: A trader operates the illegal gambling franchise in Section 25, Shah Alam under the guise of selling phone cards and smartphones.

COLLEGE students, traders and even civil servants have found a lucrative new source of income — taking bets through an illegal gambling franchise.

Armed with a smartphone and a number dispenser that prints out a slip, these “agents” operate out of shoplots and restaurants and act as middlemen.

They take bets at least three times a week for 3D, 4D, Toto as well as Sarawak and Singapore’s official betting circuit.

According to Sani Osman, his colleague, a fellow civil servant in Shah Alam, became a franchise owner and earns a minimum commission of RM6,000 a month taking bets worth close to RM25,000.

Sani’s colleague receives bets from a network of clients most of whom work in his office and Shah Alam’s commercial business area of Section 9. 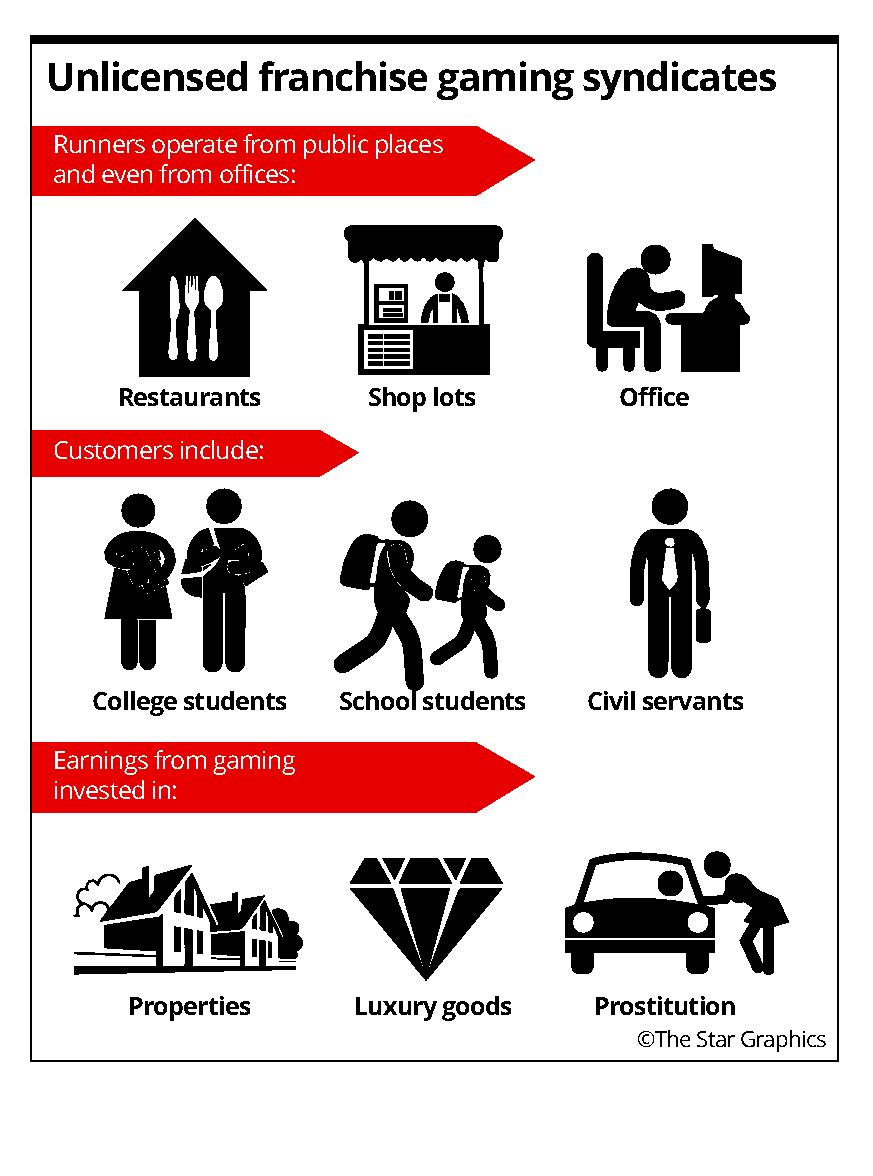 “He relays the bets using a smartphone and pays out the winnings on a weekly basis,” said Sani, adding those who prefer a printed copy were given a slip and cash was collected on-the-spot.

Most prefer this method and used a smartphone to place bets to escape detection.

College student Nora J, 19, said being an agent was an easy way to make money.

“The arrangement with the triads who control the business is simple.

Most of us start small with a deposit of RM1,500 and the triad allows us to records bets up to a ceiling of RM1,000.”

After more than 18 months as a runner, Nora who is pursuing a course in Advertising, said her deposit has grown to RM21,000, meaning she can take and place bets of up to RM15,000.

Most of her customers were college students and she used to earn up to RM5,800 a month in commission but due to exams, she has slowed down.

“Apart from friends, I sell to school students and even office workers in Petaling Jaya.

“At the end of each race day, I am required to bank-in the betting amount collected minus the commission that I have earned,” she said.

Nora said most people preferred doing transactions via a smartphone.

“I know of traders in Section 25 Shah Alam, Klang, Banting and Kuala Selangor who use their current businesses as a front to take bets.

“This usually happens where there are no legal gambling outlets,” she said.

“All the outlets have scouts watching over.

“There has been no enforcement action.

“So, the operators are protected,” she said.

According to a runner, those operating shops have an understanding with legal gambling shops that their business will not operate within a 5km radius.

StarMetro discovered that the illegal franchise were located in Section 25, Shah Alam and in south Klang were thriving.

Chin Chen, a gambler, said he placed bets on everything including the Singapore races.

“I am happy to place bets through this channel as the prize money is paid out immediately the next day.

“I was also involved in this business and the commission can go up to 25%.

“But after a year, I stopped and took the money I made to start a restaurant in Puchong,” he said.

Chin added that the triads behind the business are from Thailand, Singapore and Batam, Indonesia.

He added that more people were getting into this business as it was “inflation proof” and because of the challenging economic times.

“The triads are generous with commission as they are raking in millions.

“They do not pay tax or licence fees,” Chin said.

“I believe the ‘black money’ is ‘laundered’ and ends up being used by loan sharks as well as to finance prostitution activities,’’ he added.