Getting ready for school: (From left) Methodist Girls School student A. Levaaneshwari, 13, her sister SMK Sri Mutiara student A. Gejeswari, 15, and their mother S. Vanaja, 45, doing their shopping in Magazine Road, Penang.

Dental clinic assistant Fakrulnisah Mohd Yunus, 41, of Taman Utama, Jalan Gangsa in Alor Setar, said she decided her son should start Year One in SJK(C) Pumpong in Alor Setar so that he could learn an additional language.

“The education system in Chinese schools is more advanced compared to the national type schools,” she said.

Salwa Ibrahim, 32, of Kampung Seberang Pumpong, said she sent her daughter Putri Alya Ezriena, eight, to a Chinese school to learn and adapt to the culture of students from other races.

The officer from the Pokok Sena Prison said that so far, her daughter had not faced any problems and got along well with her Chinese friends.

Senior tax executive Norshahida Haris, 33, from Taman Wira Mergong, said she enrolled her daughter Nur Afrina Nabeelah Mohd Amirul, eight, in a Chinese school as she found the discipline there to be good. 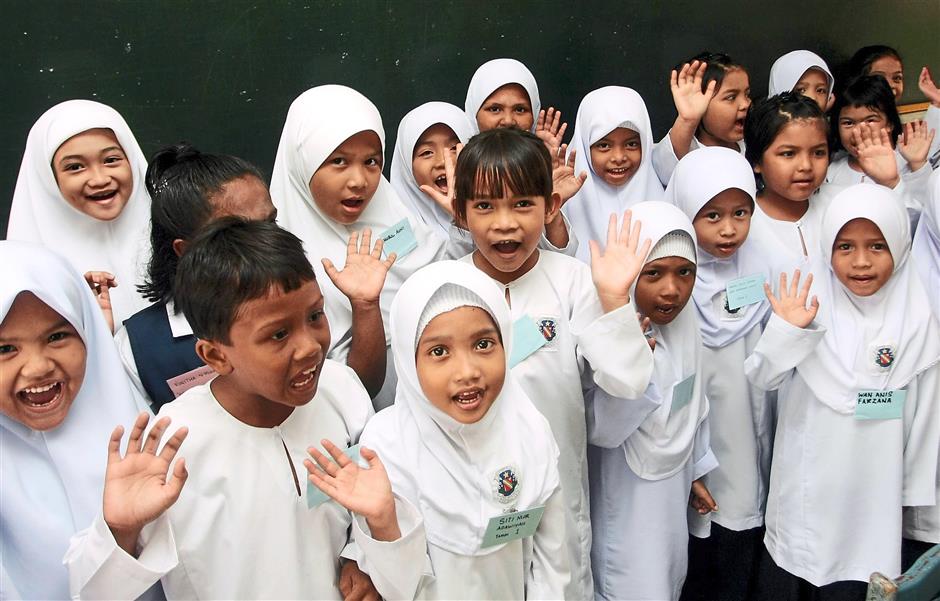 In good spirits: Year One pupils of SK Convent in Alor Setar waving during their first day of school.

Kua said the enrolment of Malay pupils at the school increased by two or three each year.

Over at SK Convent Jalan Datuk Kumbar in Alor Setar, two pairs of twins who registered for Year One yesterday grabbed the attention of others.

“I’m just so happy that I’m in the same class as my sister Hani Qaisara,” said Hani Qistina.

Puteri Rania Syakira said she and her sister were looking forward to excelling in their studies.

She said the school held an orientation programme on Saturday to allow pupils and parents to familiarise themselves with the school.

Kedah Education Department director Datin Azuyah Hassan said 30,290 pupils were registered for Year One this year at 544 primary schools in the state.

In George Town, parents and their children were seen doing their last-minute shopping for school uniforms, shoes and other items.

A parent, who wished to be known only as Nithya, said she took advantage of the additional week of school holidays to get some uniforms and shoes for her children.

“I wanted to buy the items earlier but when it was announced the holidays were going to be extended, I decided to wait,” she said.

“However, most parents had already done the bulk of their shopping last weekend. Most who came this weekend just bought stationery,” he said.